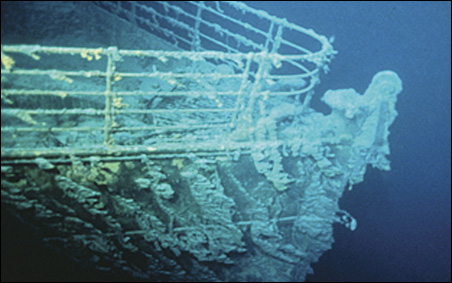 Courtesy of the Science Museum

Nearly 10 years ago, Minnesotans streamed into St. Paul’s Union Depot to see some long-lost pieces of history — artifacts from the Titanic. More than 400,000 people lined up to see clothing and personal items that went down with the ship, along with a 20-ton chunk of the ocean liner’s hull. Not to mention the ship’s whistle.

The Science Museum of Minnesota announced today it will host a new, improved touring version of the Titanic exhibit starting June 12.

“Since the exhibit was in St. Paul in 1999, there have been additional expeditions to the Titanic, so many of the artifacts we’ll have were still on the ocean floor in 1999,” said Mike Day, senior vice president of museum enterprises at the Science Museum.

Information on the upcoming exhibit  is here.

One of the most intriguing new items, Day said, is a leather case with 62 vials of perfume samples, being carried across the ocean to America by one of the first-class passengers.

“You can still smell the perfume,” Day said.

The exhibit is currently on display at the Milwaukee Public Museum. It will take about six weeks, prior to the June opening, for the Science Museum to set up the exhibit in 14,000 square feet of space, Day said. That’s about the same size as the Body World’s exhibit in 2006 and bigger than the Star Wars exhibit earlier this year.

In conjunction with the exhibit, the Science Museum’s Omnitheater will show a new movie on Titanic exploration and recovery, “Titanica.” Leonardo Di Caprio is NOT in it. The movie does include footage from 2000 recovery expedition on the ocean liner, which sank in 1912.

Day said in addition to the artifacts — which this time will include a three-ton piece of the hull, sealskin slippers, a gentleman’s top hat, china etched with the logo of the elite White Star Line and the D-Deck door, which served as the “front door” for first class passengers — there will be lots more information about the liner’s collision with an iceberg and subsequent sinking.

“This is an epic story of steam and steel, but there’s more than that, there’s a compelling human drama,” Day said. That will be illustrated with cabin recreations and stories about the passengers and crew members, to better focus on the humanity in the tragedy.

There’s one other artifact from that tragic episode that may, or may not, be on display next summer. It’s an artifact that, in some ways, highlighted and defined the 1999 Titanic exhibit in St. Paul: the ship’s whistle.

Erich Mische,  one of the exhibit’s promoters and a long-time aide to then-Mayor Norm Coleman, orchestrated one of the most successful media events of recent Lowertown history when he arranged to have the  ship’s three-bell whistle blow for the first time since the sinking.

A giant crowd gathered outside the Depot on a February Saturday afternoon to hear the sounds of history.

Beforehand, he told reporters: “If we could find a way to hear George Washington or Abe Lincoln’s voice, imagine the different context that would put our entire history in.”

He predicted it would be heard for miles.

Reported Pioneer Press columnist Joe Soucheray the next day: “I know some guys who can make body noises louder than those whistles.”

Many of us can’t think of that Titanic display without thinking of Erich, who appears to now be working with a government relations and marketing firm in Washington, D.C. I tried to reach him today to reminisce about the whistles and the Titanic, but apparently they’ve got some other events in the works in the nation’s capital.

Mike Day said he’s requested that the whistles be part of the Science Museum’s display, but hasn’t heard back yet.

I hope they do come, and maybe Erich will show up to give them a toot.

Visitor Information from the Science Museum:

“Titanica,” a giant screen film that takes viewers on a journey to the ocean floor to view the wreck of the Titanic in stunning detail, will run in the William L. McKnight-3M Omnitheater next summer, as well.  “Titanica” provides the perfect complement to Titanic: The Artifact Exhibition.