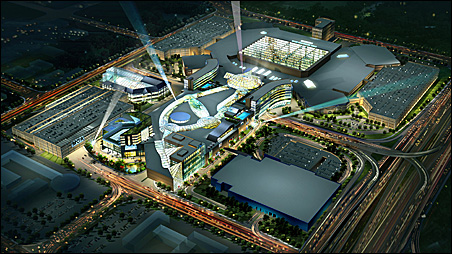 Courtesy of Mall of America
Artist rendering of the proposed Phase II expansion.

With fiscal forecasts looking bleak, the Mall of America’s plans to expand, which would require funding for preparatory construction and improvements, seem to have halted.

The proposed $2.1 billion Phase II addition to the nation’s largest shopping center would bring upscale retail stores, a hotel and an NHL-size ice rink for public and private use.

The addition, to be built north of the existing mall as well as over a parking lot on its south side, would be geared toward attracting tourists, associate director of tourism Doug Killian said, with outside hotels, a museum, a spa and a dinner theater.

But the state is heading toward a legislative session that will be hamstrung with a budget deficit that could be as much as $2 billion. And even Bloomington officials say now isn’t the time for the costly mall add-on, at least in its entirety. Instead, the focus is on developing Bloomington’s Airport South District, according to Larry Lee, director of community development for the city.

“While Phase II of the Mall of America is an important goal for the City of Bloomington, the Airport South District is a more important deal for the city and right now our efforts are invested in that district plan,” he said.

While Phase II is part of that broader development plan, which would mean an expanse of mixed-use commercial and industrial area extending to I-494 to the north, Highway 77 to the west and bordering the Minnesota River to the south and east, specific parameters of the mall expansion haven’t been finalized.

For now, the city is focused on adding a near-mall hotel to the area, which boasts the second-largest concentration of hotel rooms in the state.

“Those hotel rooms that the Mall is looking at would be a natural addition to the concentration of Bloomington hotels,” Lee said. “It just strengthens that aspect of the Airport South District.”

That part of the project requires a $170 million public investment, a fraction of the total $2.1 billion needed for Phase II. Nelson’s bill gave the City of Bloomington the ability to raise “adder” taxes, such as a food and beverage tax within the Mall, a tax on merchandise sold at the Mall and a city-wide hotel/motel tax. The city has yet to enact the measures.

But the remaining $2 billion on the expansion’s price tag is the holdup, Nelson said. That money needs to come from private investors, and the sluggish economy and struggling financial industry have combined to take a marked toll on development.

Any project — from a home remodel to a large-scale one like Phase II — requires loans, Nelson said.  “With the banking crisis, they’re having trouble getting their funding drawn together and moving forward.”

And since investors can’t promise to pick up that $2 billion tab, at least not now, the city is reluctant to set in motion its tax-increase plan to compensate for the other associated costs.

Still, Nelson said, the time to build is now. The influx in construction jobs would stimulate not only that industry — Nelson’s a carpenter by trade — but would increase spending and boost the greater economy.

“When the original mall was built, there was a similar lack of [construction] work,” Nelson said, noting a 15 percent to 20 percent unemployment rate looming in that sector. “The Mall coming along when it did got a lot of people to work, and put money in their pockets to spend.”

A boost in visitors would be a revenue boon
Two years ago, Bloomington’s City Council preliminarily approved development plans for Phase II, which required public improvements such as roadway fixes and modified parking ramps, said city planner Julie Farnham, who reviewed and wrote reports that the council approved.

Since then, the Mall has sought public financing for those improvements. The lack of that money, coupled with the stipulations the Legislature puts on funds it allocates, the planning process is at a standstill.

If the Phase II plan changes significantly because of factors like legislative mandates, such as if amenities or roadways need to be rearranged, then Mall officials must submit new Phase II plans for preliminary re-approval.

When the project moves forward, with or without notable changes, it still needs final approval from the Bloomington’s planning commission and city council.

“From my angle, the process is done in terms of preliminary planning,” Farnham said.

The project is worthwhile because it’ll ultimately be a revenue-generator, Killian said, with the goal of drawing in people who have household incomes topping $100,000.

“If we can build it the way we envision,” Killian said, “we can increase the number of visitors from 40 million annually to 60 million.”

In the meantime, Nelson said, starting the expansion with a sluggish economy could provide the surrounding area a much-needed boost.

Mall officials estimate the 42-month construction of Phase II could provide 7,000 construction workers with jobs, and an influx of deeper-pocketed visitors would provide a significant stimulus.

And compounded with an influx in deeper-pocketed visitors, Mall spokesman Dan Jasper said, the stimulus will be significant.

“Not that the Mall can do it itself, but it helps to create new jobs and create visitors that spend money,” Jasper said. “That helps everybody.”

While mall representatives wait for investors (and their banks) to get on board, Nelson said he’s hopeful.

“Maybe some of the federal stimulus stuff will start getting banks to open up and see the value of real projects [like this one],” he said. With private funding secured, “there’s a couple of parts of the projects that could start immediately.”