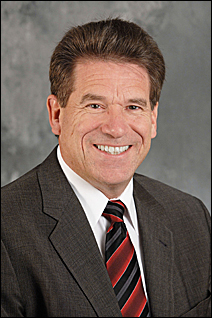 Mark Ritchie has NOT been waking up in the middle of the night in cold sweats.

The Minnesota secretary of state is convinced that all will go well in Minnesota on Election Day.  He’s confident, despite his belief that the state will have its highest turnout since 1956, when 83 percent of voters turned out in the presidential race between Dwight Eisenhower and Adlai Stevenson. (Eisenhower carried Minnesota with nearly 54 percent of the vote.)

The reasons for his confidence:

1. When the polls open Tuesday morning, Ritchie believes that a record 12 percent of the voters already will have voted.

As a result, Ritchie said, “I don’t think the lines will be any longer this year than they were in 2004.”

2. The state never got carried away with the idea of high-tech voting devices. The scanning system in place in Minnesota means there always is a paper ballot on hand if recounts are necessary.

Other states, Ritchie said, are now “turning back” to the scanner system as the most reliable.

3. State law encourages voter turnout. Not only is Minnesota one of eight states that allows same-day registration (as many as 600,000 people are expected to register at the polls), it has other laws in place that discourage voter suppression at polling places.

In 2004, Ritchie said, there were two cases in which police had to be called to polling places because of conflicts between poll watchers and people attempting to register.

“There were very aggressive challenges being conducted,” Ritchie said. “It turned out that the challengers were out-of-state people.”

He said the state Legislature — in a bipartisan way — moved quickly to clean up the problem.

Those who would challenge a potential voter must be from Minnesota. Not only that, but anyone who challenges the legitimacy of a voter must sign an oath declaring “personal and direct knowledge” that the person attempting to register or vote is not a resident of the precinct.

This discourages frivolous challenges that can be used to discourage others waiting to vote.

“Most challenges were really not aimed at the person trying to vote,” Ritchie said. “They were aimed at disrupting the process. People in the line, waiting to vote, would see these challenges and say, ‘I’m not going to put myself through that.’ It was a way of manipulating the election.”

Both parties will have observers at scores of Minnesota polling places, but those observers will work through the head judge at each of those places and will not directly confront voters.

There are cases in which the party observers even will work together. For example, Ritchie said, if a disabled voter can’t leave his or her vehicle, observers from both parties will accompany an election judge to the vehicle where the person is allowed to vote.

“Everything we do in Minnesota is based around encouraging people to participate,” said Ritchie.

Not only does he believe that 80 percent will participate, but that Minnesota again will lead the nation in voter turnout.

Voter information
Got an election or voting question? Check out the Minnesota secretary of state's Election Center for detailed information. It also will provide the latest returns on election night.