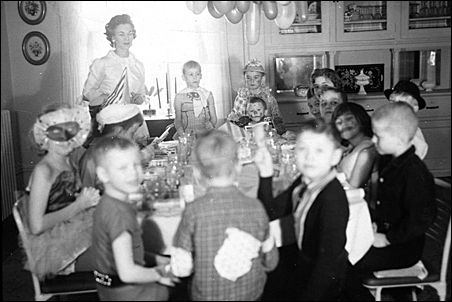 Fort Snelling never saw a military battle, but for the past 35 years, much of it has nonetheless been fighting for its life. Its enemies have been time, neglect and a federal deed that kept the historic buildings of its Upper Post in limbo.

But if plans announced this summer come true, the tide of its long battle may finally be turning.

It’s been a mighty complicated tide. With the rest of my family, I’ve been caught in its current for 60 years — ever since my father took a job with the Veterans Administration after World War II.

Soon after, we moved into what had been military housing at Fort Snelling, which had been demilitarized and was then in VA hands. In one way or another, the place has been on my mind ever since.

Nobody lives there now — my parents moved away in 1973, when the Veterans Administration pulled out and the Upper Post began its long decline.

But those of us who grew up at the fort continue to be its landless constituency: We keep an eye on the Upper Post, and three of us — my sister, one of our childhood friends and I — went there for an unusual outdoor press conference on July 28. 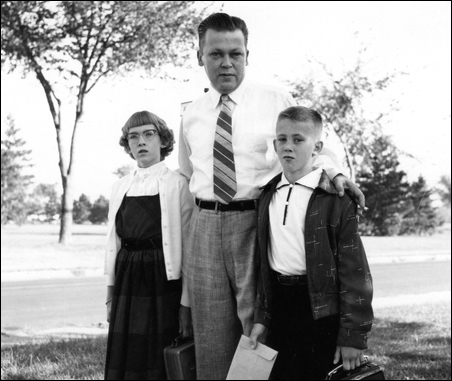 Photo courtesy of Catherine Watson
About 1955: Author, her father Richard Watson and brother Steven prepare for the first day of school.

“These buildings can be saved!’’ said Hennepin County Commissioner Peter McLaughlin, for whom saving the fort has become a personal cause, and everyone applauded. I applauded too, even though I was there as a reporter. On any other subject I could stay objective. Not on this one.

Living history in a fort
When you live inside an actual fort, historical reality gets in your blood, and you become, without knowing it, a history buff and a historic preservationist. It happened to everyone in my family, including the adults, and all of our friends. It’s more than nostalgia, and it’s something you don’t outgrow.

My family lived in Fort Snelling for more than a quarter century, part of a strange little VA community known as Tower Town, after the fort’s most significant landmark — the gray stone Round Tower, circa 1820, which stood in what we called The Point, overlooking the valley where the Mississippi and Minnesota Rivers meet.

The much-larger Upper Post — where we lived — is that mysterious string of abandoned brick buildings that runs along the bluff above the Minnesota River between the Mendota Bridge and the Minneapolis-St. Paul International Airport.

At any given time, only about 500 people lived in the VA’s Tower Town, and about 200 of them were kids. Buffered from the rest of the Twin Cities by the airport, the woods and the rivers, it was a child’s paradise, where we wandered, explored and acted out adventures in a kind of time-warp safety that seems impossible now — and which, of course, we took for granted.

Life in the fort gave us something else we took for granted: history. It was all around us, all the time. I don’t even remember having to study it in school, though we must have. I think it just came in through our pores.

We lived in historic houses; we looked out our bedroom windows at historic views; we even played in historic places. One kid’s mom had the keys to the Round Tower, and it wasn’t hard to get in.

Despite its age, Tower Town in the 1950s and 1960s had all the perks of a plush Army base, with none of the negatives. Government workers mowed the lawns and maintained all the buildings — not just our houses, but also tennis courts, an ice rink, the Cavalry Drill Hall, the polo grounds, an Olympic-sized swimming pool, a golf course, and the immense Victorian barracks buildings, then used as federal offices.

My family lived in several places over the years there, but we stayed the longest at 157-A Taylor Ave., built in 1905, one of the handsome yellow-brick homes on Officers’ Row.

The Row is among 28 remaining buildings that were constructed between the Civil War and World War I on 141 acres of land that belongs to everyone in the state — and, in a way, to no one.

The state owns it; the DNR administers it; it lies within the Mississippi National River and Recreation Area, and it’s an unincorporated part of Hennepin County.

“It’s a little goofy governmental black hole,’’ Chuck Liddy, an architect with Miller Dunwiddie Architecture, who has studied the Upper Post for a decade, said in a phone interview in early August.

Without maintenance, the buildings moldered. By 2006, conditions had gotten so bad that the National Trust for Historic Preservation put the Upper Post on its “Eleven Most Endangered’’ list. By then it had already been on Minnesota’s “most endangered’’ list three times.

Liddy traces the neglect to the way the Upper Post came into state hands. When the VA left, he said, the area’s title was transferred to the state under a federal program called “Lands to Parks.’’

The deed specified that the Upper Post could be used only for recreational purposes, like the baseball fields that the Minneapolis parks department built on the old polo grounds under a lease from the DNR.

Now, negotiations are under way to change the terms of the deed and give the Upper Post “Lands to Monuments’’ status, Liddy said. That will allow the historic buildings to finally be restored. 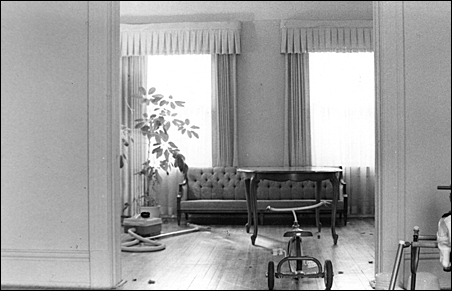 Photo courtesy of Catherine Watson
July 1973: The last day in the house at 157-A Taylor Ave.

“We’re open to any kind of use out there, as long as it’s compatible,’’ said Larry Peterson, of the DNR’s division of parks and recreation.

For the past two years, Hennepin County has been working with the DNR, using state and county grants, to stabilize and mothball the buildings so they can survive until developers are finally allowed in.

The work — replacing or patching roofs, enclosing what is left of original porches, re-boarding the windows — has been done by county inmates through the Sentencing to Service program. The effort is win-win: The offenders learn new skills for their future lives, and the fort buildings get prepared for future reuse.

Complications ahead
It has taken a decade to get this far — the DNR’S first complete study of the Upper Post was done in 1998 — and the way forward is still land-mined with complications.

Nearly a dozen government entities claim pieces of original fort land that lie outside the DNR’s acreage. It may take years to clear title to them all — may even take an act of Congress, as McLaughlin suggested at the news conference last summer, when he and the others announced a commission to tackle the problem.

If it succeeds, what happens next will depend on “market forces,’’ said Royce Yeater, director of the National Trust for Historic Preservation’s Midwest office, based in Chicago. That means outside developers — private money — could come in, lease the property and begin what preservationists call “adaptive re-use.’’

It won’t be cheap. Liddy estimates basic rehab costs at $80 million, “just to make them useful,’’ and the tab could be much higher.

Any new construction and changes to the old would have to follow newly written historic-preservation guidelines, he and others said. The guidelines outline appropriate architectural styles, the allowable location and density of new development, the right kinds of plants and trees, and appropriate uses.

The north half of the fort’s golf course, for example, “gets restored as a parade ground,’’ Liddy said — because that’s what it was in 1939, the Upper Post’s military heyday.

After the July 28 news conference, the DNR unlocked a few of the buildings, including our old house on Taylor, and I got to tiptoe in with some of the other attendees, following flashlight beams through the dark, boarded-up interiors.

Paint had peeled everywhere, plaster had crumbled from ceilings, vandals had pulled the front banister out of our house; in another the leaky roof had led to water damage so severe that the kitchen floor had collapsed into the cellar.

But structurally, they were sound. The thick brick walls are solid, and the houses are salvageable. I’ve seen buildings far worse off that turned into rehabbed swans.

I’ve always hoped the same thing would happen here — but it’s not because I lived there or because I’d love to live there again.

You can’t keep old buildings standing just because a handful of people are nostalgic about their childhoods — unless maybe they include a U.S. president or two, which Tower Town never did.

A better reason is so the past can be of use in the present — as housing or offices or schools — something that’s been done successfully at other demilitarized forts around the country, including Fort Sheridan in Illinois, Diamond Cove in Maine and Vancouver Barracks in Washington state.

No, the real reason I want the Upper Post to keep standing is so that far into the future, buildings like Officers’ Row and the Long Barracks and the Headquarters can do for other kids what they did for my friends and me:

Make them see that history is real — and that it matters. Because history isn’t old buildings. It’s people. It’s us. History is what we leave behind. We write it with every breath.

Old buildings are our memorials, our milestones along the way. They remind us of where we’ve been and how we got here, like giant family scrapbooks made of brick and wood. Saving them means saving part of ourselves. I think that’s important — and I learned it at the Upper Post.

Catherine Watson is an award-winning writer, photographer and teacher.

America has many preserved forts of the same vintage as Fort Snelling’s Upper Post. These are some that could be models for its preservation and redevelopment:

Background on the Upper Post is extensive on the web. An easy place to start is a site maintained by Todd Hintz, a Minnesota history buff and a World War II re-enactor.

A sentinel for Fort Snelling