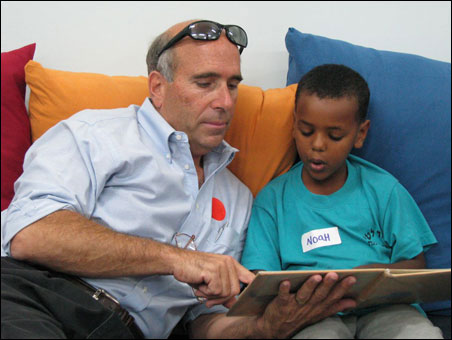 Mordecai Specktor
Minnetonka resident Bruce Goldstein, who has hosted PACT Hadera participants, listens as Noah, a student in PACT’s Alternative Learning Space program in the Givat Olga school, reads a Hebrew book about a dog and a cat.

KIBBUTZ MA’AGAN,  ISRAEL – Unlike normal tourists, the Twin Cities-area residents visiting Israel last week under the auspices of the Minneapolis Jewish Federation, are on a “mission.”

Specifically, this is the “Israel @ 60 Mission” – marking 60 years of independence for the state of Israel; and the mission rubric means that the local Jewish junket is designed to allow participants to experience the Jewish state together, and to see how the Federation’s charitable contributions are working here. The Federation is the Jewish community chest that annually raises about $15 million to support educational and social service groups both locally and abroad.

On a recent afternoon in the town of Hadera, a group of 54 Minneapolis Jews, and their Israeli hosts, assembled in a circle of chairs on the floor of an elementary school auditorium and listened to the story of Miriam’s journey from Gondar, Ethiopia, to Israel.

Miriam says that her family, part of Ethiopia’s oppressed, ancient Jewish remnant community, always heard about “Jerusalem.” One day they learned that they might be able to realize their dreams of aliya (literally, “ascending,” in the sense of the geographical and spiritual going up to Jerusalem; or immigration to Israel): there was a route to Israel open through Sudan. They sold off all of their possessions and began the long trek to the “Holy City, Jerusalem.”

Speaking calmly in Hebrew, her remarks translated to English by Gideon Herscher, an Israeli staff member of the American Jewish Joint Distribution Committee (JDC), Miriam recounted that the trip to Sudan was aborted; the route was closed and the family was now in even worse straits, because they had sold all of their worldly goods. They waited for nine years.

Then they learned of another route that went through Adis Ababa, the Ethiopian capital. It was a dangerous journey on a road plagued by bandits. However, life was so grim in Gondar and the tug of “Jerusalem” so strong that, after waiting 10 months, they forged ahead.

In May 1991, as Eritrean and Tigrean rebel fighters converged on Adis Ababa, preparing for the final battle against the forces of the dictator, Colonel Mengistu Haile Mariam, U.S. and Israeli negotiators arranged to pay $35 million in bribes to the rebels and to the government forces clinging to power –  the ransom price for the Jews of Ethiopia.

On May 24, a Saturday, a fleet of converted El Al 747 airliners and Hercules C-130 cargo planes began to ferry the Ethiopian Jews to Israel. The flights to Israel, on planes stripped of seats and galleys in order to accommodate the largest number of passengers, continued for 36 hours. More than 14,000 Ethiopian Jews were rescued – in a modern version of the biblical exodus story – in what is known as Operation Solomon, a reference to the biblical king who, by some accounts, was the ancestor of the pre-rabbinic “Beta Israel” community in Ethiopia.

When the Ethiopians landed at Ben-Gurion Airport they kissed the tarmac. The Ethiopian Jews thought that they were finally in the Holy City, that all of “Israel is Jerusalem,” Miriam explained, and added that many were so elated they fainted upon arrival.

The 54 members of the Federation’s Israel @ 60 delegation broke up into four smaller groups and visited sites of the PACT (Parents and Children Together) program, which prepares Ethiopian kids with the remedial skills and emotional support that they need to succeed in school. When the Ethiopians journeyed from their mountain homes in Gondar to modern Israel, the three-hour flight also involved a leap forward several centuries for the Amharic-speaking, agrarian Jews. Israeli educators soon found that the Ethiopian children were completely ill-prepared for the school system – many of their parents were illiterate and struggling to adapt to the new society.

The Minneapolis Jewish Federation is a major financial donor to PACT, which works in partnership with the JDC, the international relief arm of the North American Jewish community, and the Hadera municipality. Federation funds are allocated to Jewish schools and agencies in the Minneapolis area; but a big chunk of the annual fundraising campaign proceeds are sent on to the Jewish Agency for Israel and the JDC.

One group of Minneapolis Jews visited PACT’s Warm Room Alternative Learning Space in the Givat Olga elementary school, where some of the young Ethiopian-Israeli children with emotional and developmental disabilities get remedial help to develop both cognitive and motor skills. Noah, a young PACT enrollee, demonstrated an exercise that had him gliding on his stomach atop a skateboard and transferring variously colored beanbags from one spot to another.

The Ethiopian-Israelis have not had an easy time adjusting to their “Jerusalem” –  in reality a fast-paced, high-tech society. Traditional family relationships have been strained as children have learned Hebrew faster than their fathers, challenging the authority of the fathers who have to turn to their children for assistance with simple daily tasks. The Father and Son program, a component of PACT Hadera, works to mend the familial rifts. Tali Veiner, a Minneapolis native who now works for the JDC in Jerusalem, said that PACT staffers have learned to emphasize “emotional support together with the academic support” for the Ethiopian-Israeli kids.

The Israel @ 60 Mission members have been impressed to see how their charitable contributions are making a difference in the lives of Israelis. The visitors from Minneapolis toured some of Israel’s top attractions – the Old City of Jerusalem, Masada, the Dead Sea – but most of them remarked about their visits to educational and social uplift programs in Jerusalem, Hadera and Kiryat Shemona, a development town in the far north of the country.

“The parts that I enjoyed the most on the trip – probably, because I’d been to the tourist sites a lot of times – were the visits to the Federation programs; and those were the times I was moved to tears,” said Bob Karasov, a St. Louis Park pediatrician and mohel, practitioner of ritual circumcision.

“It’s just so inspiring for me to see these programs, to see how Israel is constantly rebuilding itself…and how these kids are building the country and developing themselves as people,” said Karasov.

Mordecai Specktor is editor of the American Jewish World.