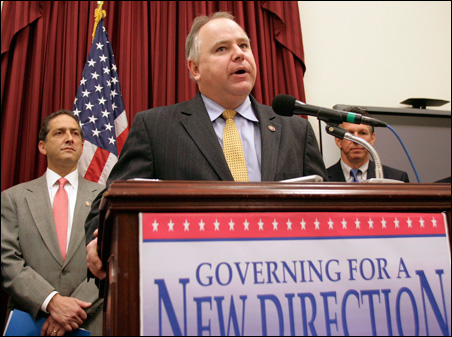 REUTERS/Yuri Gripas
Tim Walz has the backing of some high-powered folks in his own party.

One of Paul Thatcher’s stories of this year’s election features, of course, the president-elect. But to hear Thatcher, a Minneapolis businessman-of-all-trades and longtime DFL insider, tell the tale, it says more about Tim Walz than it does Barack Obama.

When one of the Wall Street bailouts was being bandied about in Washington, Obama, according to Thatcher, called on Walz, the Democrat who represents Minnesota’s 1st Congressional District along Minnesota’s southern border, to plead his case.

“He got a call from Barack asking him to find five of his ‘no’ colleagues and set up a conference call, saying, ‘I want to talk to you guys,'” Thatcher says. “Obama talked the other five into changing their votes, and Walz told me that if the call had gone on two more minutes, he might have changed his mind too.”

The main point of the story is not Obama’s diligence and persuasiveness in the middle of a campaign and economic crisis — although that’s certainly noted — but that Walz has some juice in Washington. A surprising amount, some would say, for a lawmaker who’s only been on Capitol Hill for two years. (In fact, Walz served as co-president of his freshman class during his first term.)

But such is the ascension of Tim Walz, a 44-year-old former school teacher and National Guard veteran who appears to be riding a Democratic wave and his own bona fides to a new position: leader of the home state party. On the other hand, the DFL has a number of rising candidates right now, and some observers believe the state might be seeing the best crop of young Democrats in recent memory. But to some, the fast-talking barrel-chested guy from Mankato stands above the crowd.

“Our junior Senator Amy [Klobuchar] aside,” Thatcher continues, “Walz is by far the leading political star of the DFL Party.”

And there are whispers — it’s never too early to prognosticate — that Walz could indeed be shaping up as a frontrunner to run for governor in 2010, when Walz’s second congressional term expires. Of course, if Tim Pawlenty decides against running for a third term, everyone and his puppy dog will be clamoring for the Capitol.

“He has the luxury of choices,” Thatcher says. “It’s because of his authenticity. He’s the real deal.”

Second win solidifies status
The Walz camp declined to comment for this story on the congressman’s future plans, but it’s clear that he has the backing of some high-powered folks in his own party.

“I know him very well, and I’m a great admirer,” says Sam Kaplan, a longtime DFL fundraiser who in the past has seemingly had the power to anoint candidates for office. “He has the energy, the passion and the knowledge to do whatever he wants. He has a sense of confidence of himself.”

Kaplan echoes Thatcher’s notion of Walz being a genuine article, and that clearly resonates with voters in his district. In 2006, Walz was unknown in the political world, but he has deep ties in his community, especially in Mankato. A whole new generation of voters in the area can say Walz was their school teacher or high school football coach or National Guard superior — sometimes all three.

Given his background locally, and his no-nonsense approach to social and economic issues — not to mention the two wars — Walz comes across to many voters in the 1st as, simply, one of them.

“I think Tim Walz is part of a new generation of Democratic candidates more suited strategically for the district,” says Larry Jacobs, the director of the Center for Politics and Governance at the Humphrey Institute at the University of Minnesota. “For a while, they were just throwing candidates out there. But Walz fits, in that he’s almost socially conservative and fiscally liberal.”

Walz certainly has made much of his commitment to agricultural and veterans issues — likely the two most important topics in the district year-in, year-out. And while the economy has been hit hard in the 1st, Walz maintained his local credibility by voting against the $700 billion Wall Street bailout. (He’s also a proud member of the NRA.)

That Walz won in 2006 could be chalked up to a fluke, part of an anti-Bush, Democratic wave that year. Still, it’s worth noting that he beat a popular 12-year incumbent, Gil Gutknecht, a Republican who routinely beat his opponents by double-digits. Walz beat him 53 to 47 percent.

This time out, Walz’s reelection was not necessarily a foregone conclusion, but he trounced GOP foe Dr. Brian Davis, a formidable candidate who would be a good conservative fit for the district, 63 to 33 percent. That Walz is only the fifth Democrat to represent the district since 1857 is notable, and there’s reason to believe that he learned a good bit by watching his DFL predecessor, the former congressman Tim Penny, who leaned so moderate in the 12 years he served the 1st, he eventually joined the Independence Party after he left Congress.

“He’s quite diligent on maintaining personal relationships back home, quite apart from policy issues,” Jacobs says of Walz. “And on social and policy issues, he’s been able to frame those in non-controversial terms.”

What are the odds of Gov. Walz?
The question is, could Walz — if he wanted to — parlay that down-home appeal into a statewide office? Even those who support Walz say that’s anything but a lock.

“I think he would be a wonderful governor,” rainmaker Kaplan says. “But he’s made such extraordinary strides in Congress. He’d have to think twice before giving that up.”

“Maybe 10 years ago, the DFL had a long bench, but they were older,” Jacobs observes. “There are a number of bright, young Democrats right now, and it’s not just Walz.”

And running for governor involves a different kind of scrutiny from the public, the press and the loyal opposition. For instance, there are already rumors about Walz’s personal finances being in disarray, which could be red meat for any opponent. Opensecrets.org, the website that tracks the public and personal financial records of officeholders, lists Walz as 394th in the House as far as net worth. And the website lists his “liabilities” for 2007 as totaling anywhere from $225,000 to $515,000. All this for a schoolteacher on leave from his job.

At least one person is gearing up for the possibility of a Walz governor run in 2010: State GOP chair Ron Carey. Carey notes that Walz spent all of $2.4 million to get reelected, three times that of his opponent.

“And it helps that he can’t mask that he’s a liberal, despite his claims to be a moderate Minnesotan,” Carey says. “I often say that the only thing conservative about Tim Walz is his haircut. And his military background does not guarantee election.”

“After 9/11, military issues became predominant, but now it’s about jobs and the economy, it’s a one-dimensional electorate,” Jacobs says. “He’s a bright star, sure, but he’s not the only one.

“But he is,” Jacobs concludes, “one of the most natural politicians I’ve seen.”

Why is Walz’s clout on Capitol Hill on the rise? Think swing district
By Catharine Richert
1/16/2008