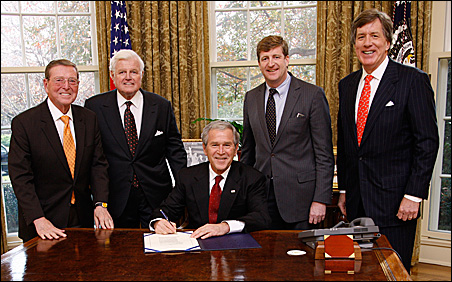 WASHINGTON, D.C. — After 18 years in Congress, Minnesota Republican Jim Ramstad is going out on a high. But thankfully not the kind of high that marked the lowest point in his life, when he woke up in a Sioux Falls, S.D., jail cell 27 years ago in an alcoholic stupor.

He was a 35-year-old state senator at the time, charged with disorderly conduct and resisting arrest after a night of drinking. It wasn’t the first time he’d blacked out during 12 years of abusing alcohol, a habit that began during his senior year in college. But he was determined to make sure it was the last time.

He decided to stop drinking and to devote his life to helping others recover from chemical addiction, which he says is a matter of life and death for nearly 30 million Americans.

The decision launched him on a crusade that has culminated with the enactment of landmark legislation he championed to give recovering alcoholics like himself and those with mental illnesses in their families the same access to health insurance and treatment as those with physical illnesses.

The legislation, officially the “The Paul Wellstone and Pete Domenici Mental Health Parity and Addiction Equity Act of 2008,” was passed by Congress and signed into law by the president on Oct. 3, as the 110th Congress recessed for the fall elections before returning for a final lame duck session this week.

In September, 1997, Ramstad teamed up with Wellstone, the fiery Minnesota Democrat senator who died in a plane crash in 2002, to introduce identical Substance Abuse Treatment Parity bills in the House and Senate. The measure was patterned after legislation Congress passed a year earlier that prohibited insurance companies from placing limits on treatment for people suffering from mental illness. Both Wellstone and New Mexico Republican Sen. Domenici had family members afflicted with mental illness.

On Thursday, Ramstad joined President Bush and Domenici, along with Sen. Edward Kennedy, D-Mass., and his son, Rep. Patrick Kennedy, D-R.I., in the Oval Office for a ceremonial signing ceremony. Ramstad counseled the younger Kennedy when he was treated for chemical dependency at the Mayo Clinic two years ago.

“There’s nothing like leaving on a high and passing this legislation on the last vote of the session,” the 62-year-old Ramstad said as he sat in his first floor office in the Cannon Building across from the Capitol surrounded by papers, photographs and other memorabilia accumulated during his nine terms in Congress.

Ramstad explained that the House version of the bill, H.R. 1424, actually served as the vehicle for the historic $700 billion final bailout package enacted on Oct. 3.

“The first bill went down in the Senate and it was sitting there and it looked like we were going to adjourn,” he said. “But I went back to my office and I said there’s a silver lining because they’ve got to bring this back as a separate bill. Then [Senate Majority Leader] Harry Reid called up H.R. 1424 and it served as the base bill for the bailout bill.”

‘Drug czar’?
And although Ramstad, who said one of the reasons he is retiring is that he was tired of commuting from his Minnetonka home, may not be done with commuting or with public service. His name surfaced this week, along with that of Patrick Kennedy, as one of President-elect Barack Obama’s possible choices as the nation’s so-called “drug czar,” or head of the White House Office of National Drug Control Policy.

“I can’t say anything about it,” Ramstad said, a sure sign that he’s either in the running for the job or wants to be. “I’m honored and humbled to be considered for this important position, but that’s all I can say.”

Although Ramstad hasn’t had a drink in 27 years, since that fateful night in Sioux Falls, he’s quick to correct anyone who refers to him as a recovered alcoholic. As he told me when I wrote about him in The Hill in August 1998, under the headline, “Jim Ramstad’s Sobering Words About Alcoholism,” an alcoholic is never free from his addiction.

“It’s recovering-ing, not recovered,” he said at the time. “Every day, I have to recover. Every day I do healthy, positive things so I won’t take another drink.”

Ramstad, a native of Jamestown, N.D., graduated from the University of Minnesota in 1968 and George Washington University Law School in 1973, and served in the Minnesota state Senate from 1981-90 before being elected to Congress that year to succeed retiring veteran Republican Rep. Bill Frenzel.

When I asked Frenzel, now a senior scholar at the Brookings Institution in Washington, about Ramstad this week, here’s what he said:

“Some Congressmen think they are hard to replace, but on every day in the last 18 years I was very proud and very glad to have Jim sitting in what I used to call ‘my’ seat. No buyer’s remorse for me with Jim in the Congress. He conducted himself like a gentleman at all times — no cheap shots and no unkind words. Because he was man of good will, he had as many on the other side of the aisle as on his own. There are not a lot of Jim Ramstads left. He will truly be hard to replace.”

Frenzel, who like Ramstad was part of the GOP’s moderate wing, said Ramstad’s “prime achievement was the passage, after 18 years, of his mental health bill, a signal success for a member of the minority.” Frenzel added that Ramstad, who inherited his seat on the Ways and Means Committee, “was strong on taxes and trade, but his signature was a voting record showing stern discipline on matters of fiscal responsibility.”

Respected in both parties
Ramstad is liked and respected by his colleagues on both sides of the aisle, and if chosen as the Obama administration’s drug czar, it undoubtedly would go over well on Capitol Hill. That was evident last week when some 400 people gathered to celebrate the passage of the “Mental Health Parity and Addition Equity Act” on Capitol Hill with Ramstad, Domenici and the Kennedys.

“It was a wonderful celebration,” Ramstad said as he accepted awards with Domenici and the two Kennedys. The emotional impact of the evening was palpable, as it was probably one of Sen. Kennedy’s last public appearances after his diagnosis and surgery for a malignant brain tumor.

“Patrick accepted the award by mimicking his dad’s distinctive speech,” Ramstad said, “He said, ‘I want to thank all of you for the great job you have done on behalf of chemical addiction and mental disease, especially Congressman Kennedy.'”

Ramstad is clearly excited about the dramatic change that is about to occur in American politics when Obama becomes president. “I’m very impressed with him. I think he will bring people together in all ways of life. But he’ll have a short honeymoon.”

Asked what advice he has given his successor, Republican Eric Paulsen, he said, “Get to know members on both sides of the aide and work in a bipartisan way.”

And his biggest disappointment? “The excessive partisanship that gets worse every year.”

But Ramstad leaves public office, at least for now, with the sure knowledge that he has done what few others in Congress have done, which is to leave a lasting mark in the history books.

“Mental health is my legacy,” he declares.