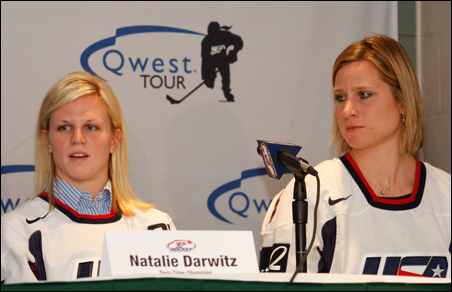 The Wild have milked the marketing logo “The State of Hockey” when referring to puck-centric Minnesota. The suggestion is that it’s more than a sport; hockey is an ingredient of the state’s culture.

But there’s a need to modify that pronouncement. Minnesota has become the “The State of Women’s Hockey,” too.

For the next 15 months, Blaine is home base for the U.S. Olympic women’s hockey team as it skates towards the 2010 Vancouver Winter Olympics.

We wrote months ago about the deal between USA Hockey and the National Sports Center in Blaine that has brought most of the nation’s top post-collegiate women players to the metro area.

Olympic trials camp likely to be based in Blaine
But Saturday night, during a news conference at Xcel Energy Center, the full impact of the Blaine training base was brought into focus: Besides practicing here regularly, the final U.S. Olympic trials camp looks like it will be held right here in Minnesota Aug. 18-23.

Although plans are still tentative, the 2010 Olympic team will probably be named here.

Two-time Olympian and former Gophers star Natalie Darwitz and three-time Olympian and Harvard star Angela Ruggiero are superb examples of the power of the residency program. They both appeared at Saturday’s news conference.

Veteran women players, such as Darwitz and Ruggiero among them, told leaders (men) of USA Hockey, the national governing body for the sport, that a strong, organized U.S. team needed a home base to train full time as a group. More importantly, they needed a site that wasn’t as isolated as Lake Placid, where many previous training camps and Olympic preparation had been held.

Post-college women needed a place where they could pursue careers, continue in graduate or professional school and live full lives.

“For me, it’s amazing,” Darwitz said. “It’s pretty much in my backyard. It allows for balance of a real life and hockey.”

She trains in Blaine in the mornings and then is an assistant coach at the U in the afternoons and evenings. She’s 25 and setting a foundation for a post-playing career.

Ruggiero, 28, who was a Hah-vahd government major, has already written an autobiography and appeared on the TV show “The Apprentice.”

Still, she wants to continue to play hockey.

“For the growth of the game there needs to be an outlet for women when they graduate from college,” Ruggiero said.

She noted that the average age of NHL male players is about 28.

“Most women retire when they’re 22, when they graduate, without reaching their full potential,” she said.

With no real pro league, Olympics best hope for women players
She wants to play. With no legitimate women’s pro league, the international game — capped by the Olympics — is the height of their game. USA Hockey and the U.S. Committee support the players; compensation unknown.

So far, the Blaine residency program seems to be paying off. With a mix of resident players and college stars, Team USA won the important Four Nations Cup title earlier this month, outdoing defending Olympic champ Canada and Finland and Sweden. This followed a victory over Canada in the world championships last spring.

Meanwhile, this commitment to building the best team possible is being financially backed by Qwest, which has signed on as the title sponsor for a pre-Olympic tour of Team USA, which will begin next fall.

Four of the 10 games leading up to the Olympics will be played in Minnesota: two at Xcel Energy Center, one in Warroad and one at the University of Minnesota’s Ridder Arena.

Hockey moms, along with their potential hockey-playing daughters, are targets of the tour, to be sure.

Corporations these days don’t invest dollars for the nice-guy points. They seek a return on their investment and on their objective. As the mature women — such as 41-year-old Olympic swimmer Dara Torres — of the 2008 Beijing Summer Olympics showed, they connect with other mature women, who make many purchasing decisions for their households.

They also connect with young girls, who may want to grow up to be just like Natalie or Angela.

So guess what Qwest has in mind to promote the tour and activate its sponsorship?

A Facebook page has been set up to share news and information about the team and its players. Text messaging will be used to deliver player quotes, scores and training tips to people who use such technology, mainly young people.

Did we mention that Ruggiero is using her time in the Twin Cities wisely? She is working towards her master’s in sports management at the University of Minnesota.

Having been on “The Apprentice” and seen Donald Trump’s hair, Ruggiero believes that one way for people to connect with the U.S. women’s Olympic hockey team is to extend the “reality show” notion.

“The Olympics were the original reality show,” she said. “It’s all about connecting with that person. ‘I want them to succeed. They’re representing our country. I know that person’ … We have to let the fans inside of what we’re doing. How about video blogs? Show how we train. What are we eating? Goofy things.”

It may seem like a long way off, these Winter Olympics, set to begin in Vancouver on Feb. 12, 2010. But for Darwitz, it’s coming right at her.

“We see the light at the end of the tunnel,” she said. “And it’s getting brighter each day.”

It’s shining all the way to Minnesota, home to the U.S. Olympic women’s hockey team.