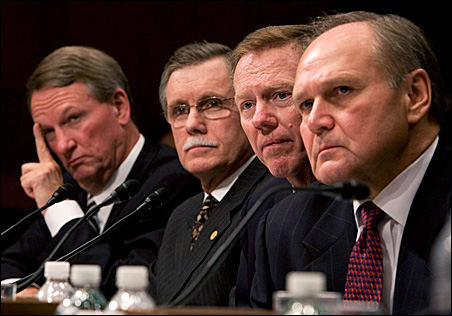 If you’ve flown anywhere in the past four years, you very likely travelled with an airline that was in bankruptcy. Gone shopping? Many big retailers, including Macy’s, have survived bankruptcy.

Why so much angst, then, over keeping Big Auto out of bankruptcy court? The question is keeping lights burning late this week on Capitol Hill as congressional leaders push for a Senate vote as early as today on a $15 billion bailout for auto makers. On Wednesday, the House approved the plan, 237 to 170.

The simple answer from backers of the bailout is that this industry is too big and these times are too bad to allow the major auto makers to fail.

But a Chapter 11 bankruptcy “wouldn’t be the worst thing in the world,” said Alfred Marcus, a professor of strategic management at the University of Minnesota’s Carlson School of Management. The companies would be forced to restructure and renegotiate their debts, and that could save them.

Indeed, the bailout bill Democratic leaders and the White House agreed upon late Tuesday night would impose restructuring, oversight and other requirements similar in many respects to what the companies could expect in bankruptcy court.

“I don’t understand the arguments against bankruptcy,” Marcus said.

Frederick Zimmerman disagrees, though, and their arguments frame the debate on Capitol Hill. Zimmerman has written books about manufacturing and he helped found the School of Engineering at the University of St. Thomas where he currently is a professor emeritus.

“You are going to put in jeopardy one of the most important building blocks of all of industrial American,” Zimmerman said.

Buying a plane ticket from Northwest Airlines or a coat from Macy’s differs by several degrees from spending thousands of dollars for a machine you expect to drive for years.

“Who is going to want to buy a car from a company in bankruptcy?” Zimmerman asked. “What is the warranty worth?”

Further, Zimmerman said, a second manufacturing tier — auto industry suppliers, including many in Minnesota — could be ruined during a bankruptcy proceeding because suppliers might not be paid for work they’ve already done and at the same time they could lose major customers for future orders.

Many Minnesota companies manufacture transmission parts and other pieces that go into auto assemblies, he said.

“Our strength here is precision manufacturing,” Zimmerman said. “Components are the things we make.”

Car dealers to taconite workers
The more chilling prospect that is driving the debate in Washington is that the companies eventually could be forced to liquidate under the more dire Chapter 7 bankruptcy if they don’t restructure now, Marcus said.

“You are dead” under that scenario, Marcus said. “You have to sell all of your factories, everything.”

The auto industries’ pension and benefit obligations are huge. And it’s not just former workers who could be at risk under a Chapter 7 liquidation but also other Americans who depend on the security provided by the government’s pension guarantee program, Marcus said. That system already is overloaded by this recession.

From car dealers to taconite workers, many people in Minnesota and across the nation have a stake in the outcome of the bailout debate and the eventual fate of the auto companies.

Thousands of Minnesotans depend on auto company pensions and other benefits, especially from the Ford Motor Company, said David Vang, who chairs the finance department at the University of St. Thomas’ Opus College of Business.

Ford announced Monday that it will not seek this round of emergency loans that General Motors Corp. and Chrysler LLC have requested from Congress. Vang said that doesn’t necessarily eliminate the prospect of bankruptcy for Ford.

“They might think bankruptcy is a better strategy” than a government bailout with all of the strings that would be attached, he said.

But Zimmerman said Ford is several steps back from the precipice where the other two are teetering.

“Ford can make it without any bailout, but it is not going to be easy in this kind of an environment,” Zimmerman said. “Ford has more cost-effective designs, higher quality and fewer turkeys in the lineup.”

The almost-done deal
Late Tuesday, the White House and congressional Democrats reached a deal that would throw a government lifeline to the faltering industry but require the auto companies, their workers and creditors to quickly negotiate a path to profitability or face the prospect of bankruptcy, the Washington Post reported.

The companies would be required by March 31 to cut costs, restructure debt and obtain concessions from labor sufficient to report a “positive net present value,” the Post said.

The Senate could take up the measure as early as today, and the companies could get their loans as early as next week. The bill faces an uncertain future in the Senate.

One sticking point is the Democrats’ desire to bar the companies from pursuing lawsuits against California and other states that are trying to implement tougher emissions standards and cap greenhouse gases. Republicans oppose that provision.

Suspense will focus on Senate Republicans who were balking at the proposal earlier this week. Some were annoyed that they had been excluded from the negotiations, the Post reported. “Others raised more fundamental objections, saying an early draft of the plan didn’t go far enough to compel the auto giants to make changes and ensure that taxpayers are repaid,” it said.

Minnesota’s Republican Sen. Norm Coleman said in a statement Tuesday that he was “deeply concerned about the economic fallout from a failure by one or more of the automakers,” but he had serious reservations about the bill as it stood then.

“Before we even contemplate providing taxpayer dollars to the auto industry, we need to see a credible blueprint for future profitability based on a fundamental restructuring that includes painful but necessary concessions from automakers, labor, creditors and dealers,” Coleman said.

With jobs on the line at Ford’s St. Paul plant, Coleman expressed relief over the company’s decision to withdraw from the emergency loan request. Coleman said it suggests Ford might have the financial means to weather the current tough times without an emergency loan.

Car czar
Under a key provision in the legislation, President Bush would appoint a so-called “car czar” with the power to set benchmarks for the automakers’ restructuring and to bring stakeholders such as unions and dealers into the process.

The debate begins with the assumption that a government official would have the wisdom to make the right decisions for an industry where so many knowledgeable people have failed.

Marcus at the Carlson School said he worries the office would be too politically driven: “The person who holds the position is going to want to save U. S. jobs for the sake of saving U.S. jobs.”

That may be an American political mandate but it wouldn’t necessarily spell the best business plan for the industry.

Still, he sees merit in the idea, at least in theory.

“There is creeping socialism in this country by necessity,” he said. “We would own part of that industry…. If you own something you should have a say in it, and you should have responsibility.”

For whatever reason, the auto companies have made bad decisions over the last 30 years, Marcus said. While they’ve paid lip service to efficiency and the need to restructure, they haven’t been able to get the job done.

With the government watching and paying part of the freight, they could be pushed into doing what needs to be done, and “if they don’t somebody will scream and holler,” Marcus said.

Vang at St. Thomas was more skeptical. There will be too much pressure for political considerations rather than for doing what needs to be done to successfully restructure the industry, he said.

“Laying off employees is never going to be politically popular,” he said, even though it might be the right business decision.

Vang also sees politics in the bill’s provisions prohibiting private planes for executives and limiting their compensation. Under the proposal, the companies would be barred from paying dividends to shareholders or bonuses to top executives.

“There will be ways to get around whatever is written into law and compensate executives,” Vang said. “When this was tried before, they came along with executive stock options.”

Zimmerman gives American auto makers more credit than many other observers. They need to slim down their lineup of models, but they still make many high-quality vehicles, he said. And the right “car czar” could help them concentrate on the pluses. His choice for the job would be former Massachusetts Gov. Mitt Romney.

“His father was in the business and he knows the business,” Zimmerman said. “He is from Michigan. He knows the ins and outs. And he is a fiscal conservative.”

The $15 billion is intended to shore up the companies through March. Unless they use the time brilliantly to pull themselves back from the precipice, they could be at the government’s doorstep in a few months, Vang noted.

“I fully expect some sort of compromise to come out that essentially punts the problem to the next administration,” he said.

Big Auto bailout: A lot at stake for Minnesota — but is it a good idea?