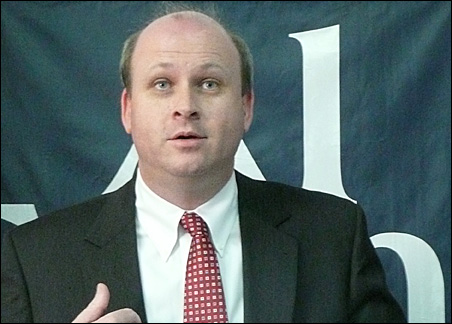 It was a quintessential “Mary Tyler Moore Show” moment this morning.

Only in Minnesota could this scene have been acted out.

Beyond the frosted windows of Al Franken’s campaign offices on University Avenue, on the border of Minneapolis and St. Paul, a good, old-fashioned winter storm howled.

It looked like the opening scene of most of the Mary Tyler Moore classic episodes.

Inside, the low-slung headquarters of the office park, at 11:30 a.m. today, another news briefing was set to begin. Weather be damned. This is Minnesota.

Franken’s lawyer, Marc Elias, stuck in Minnesota with the Washington, D.C., blues again, made a declaration as forceful as any the campaign has made since the Nov. 4 election.

As usual, he minced no words.

Canvassing Board Tuesday will add challenged ballots to totals
Elias said that come Tuesday, when the State Canvassing Board accepts the results of the 5,000 or so previously withdrawn challenged ballots by both sides and incorporates them into the recount total, Elias has no doubt that, “Al Franken will have more votes than Norm Coleman … We believe firmly that margin will be between 35 and 50 … At some point not long after that, Al Franken will stand before you as the senator-elect from Minnesota.”

But it was darn close. Victory is at hand for the Franken forces, he said, as the snow fell a full 46 days since nearly 3 million Minnesotans cast their votes for either Franken, Coleman, Dean Barkley, Mickey Mouse or the Lizard People.

Elias, a tall, friendly fellow who has been in the state so long HE may be able to vote in our next election, has confidently “projected” victory before, based on the Franken campaign’s internal analysis.

But Saturday morning, at a news conference attended by two lonely print journalists and two courageous videographers, Elias was absurdly confident and assured, even more so than usual.

Standing at a lectern in a yellow and gray-striped dress shirt — sans his typical tie and jacket — in khaki pants, Elias, who has overseen other national recounts for Democratic candidates, said, “Today I stand before you to say that we now have enough data that I can say with a very high degree of confidence that Al Franken is going to win this count.”

We’ve written about this before and about how Franken’s side has been counting.

It all goes back to tracking how election judges in each of the state’s precincts ruled on challenged ballots. Franken’s team recorded those decisions, they say, and assumed that the State Canvassing Board would, more or less, go along with the “call at the table” by election judges from Ada to Zumbrota.

That’s why, when the recount in the 87 counties was concluded, Elias claimed Franken was ahead by four votes.

That number took into account all the challenges and how Elias assumed they’d be upheld by the canvassing board, made up of two state Supreme Court judges, two Ramsey County judges and Secretary of State Mark Ritchie.

But this “between 35 and 50” vote margin he spoke of today arises because, it sure seems, the Franken side did better last week before the canvassing board than the Coleman side on winning challenged ballots.

Indeed, Franken’s side did better than even it thought it would do.

Elias says various media counts are wrong
As for the other numbers floating around various media outlets suggesting Franken is “ahead” by 260 votes or so; that’s just not accurate, Elias said today.

That 260 number doesn’t take into account the 5,000 or so previously withdrawn challenges by both sides. Those ballots will be included into the total recount come Tuesday.

“Our internal count has no uncertainty as to what will happen on Tuesday,” Elias said. “We have already allocated those votes” based on how they were called at the table, he said.

In Elias’ mind, the recount is over …. except for the counting of rejected absentee ballots. That process will be complex, and a procedure, still undefined, has been ordered by the Supreme Court.

Elias said he is confident that Franken will not lose his “35 to 50” vote lead when the 1,600 improperly rejected votes get counted.

As for the Coleman campaign’s lawsuit about duplicate ballots, especially in Minneapolis, Elias called it “speculative and hypothetical” and said, “They simply want to create an issue.”

But the Supreme Court has scheduled a hearing on the matter for Tuesday. It will weigh in on that.

But of Elias’ pronouncement today, Coleman campaign spokesman Mark Drake told MinnPost in an email: “This is just more bluster and hot air from a campaign that has been trailing for two years. While we can understand their need to latch onto their temporary lead, the reality is there’s a long way to go in this process.  We have no doubt that once this recount is fully completed, Senator Coleman will be in the lead and will be re-elected to the Senate.”

Time will tell, and time is running out.

But on this snowy Saturday, one could only think of Ted Baxter and take the hot air seriously.