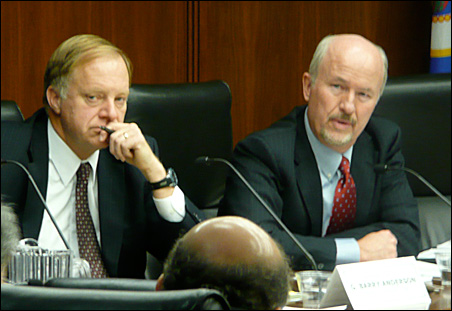 Here’s a MinnPost Q-and-A to guide you through Friday’s State Canvassing Board meeting, or as Illinois Gov. Rod Blagojevich would say, “What’s the [bleeping] deal with that [bleeping] recount?”

What’s going to be decided Friday?

Two mega-decisions rest on the shoulders of the five-member board. Both go to the basic and differing legal positions of the two campaigns.

The fifth pile includes ballots from voters who seemingly did everything right, but whose vote wasn’t counted because of an election judge’s error.

The 133 are the ballots that went missing from a Dinkytown precinct since Election Day, when tallies showed a higher number of voters than ballots that now can be accounted for.

Key question: Should the original vote on Election Night count, or should the board certify the recount vote, minus the 133?

Where do the campaigns stand on such matters?

Coleman’s lawyer Fritz Knaak says the law is clear. (See below for what Franken’s lawyer says.)

Regarding the rejected absentee ballots, Knaak argues those should be counted when the election is contested after the recount, and not now. The logic: If they weren’t ever counted, how can they be recounted?

His position on the 133 vaporized ballots: They don’t exist, they shouldn’t count … even though everyone else seems to believe they did exist and were counted on Election Night.

He still wonders whether the voting machines malfunctioned.

And can we guess that Franken’s guy disagrees?

He cites his version of the law on the unfound 133 in an affidavit filed with the Canvassing Board.

And his position on the rejected absentee ballots, including an affidavit with 62 voters who share their rejected ballot experiences.

Not to mention, a YouTube event. Franken’s side attached a DVD of its YouTube video to their legal documents so the Canvassing Board could watch.

Better than the DVD is a Pioneer Press story today that confirms the Elias assertion: There’s a bunch of improperly rejected ballots in them thar’ hills.

What about those challenged ballots from Election Night — aren’t there still a zillion of them out there?

Close. Right now, about 4,000, split just about evenly between the two sides. (The Coleman campaign today withdrew another 225 challenges.)

The board is going to take up this matter, too, on Friday. No way, no how, will the judges and Ritchie allow the campaigns to bring them that many disputed ballots when the board meets again Tuesday.

Both campaigns have said a meeting could occur to hash out all the challenges. That would be private … except for all the TV cameras stalking the lawyers.

They meet again Tuesday? You gotta be kidding …

Tuesday is the next super-duper big day of big days in the Big Recount. That’s when the board will actually begin to judge challenged votes en route to finally certifying this election, which has now been in doubt for 37 days.

OK, so there’s one of those “head scratchers” that Secretary of State Mark Ritchie has talked about — where some wayward voter’s intent is nearly impossible to determine.

How does the board make a decision?

“We would prefer to see a 5-0 vote,” said Deputy Secretary of State Jim Gelbmann.

That is, the best-case scenario would be all five canvassing board members agreeing on the voter’s intent on each challenged ballot, or all five agreeing that there can be no determination.

But, according to secretary of state communications specialist Pat Turgeon, unless the board changes its rules, majority vote is sufficient.

Thus, it’s possible that the board could give a vote to a candidate on a 3-2 decision.

“We’re just hoping it’s so clear” that the board upholds the local election judge in most cases, Gelbmann said.

But don’t expect too much clarity.

Who’s on this canvassing board again?

All the legalities aside, as this affair has unfolded, would you say the campaigns, after all these months, are beginning to get along?

To which Coleman press secretary Luke Friedrich replied: “We are standing behind the law on how recounts should be conducted and against efforts to change the rules when they don’t suit your needs.  We have consistently stated that every legally cast and counted ballot should be re-counted. The Franken campaign has made it abundantly clear that they could care less about the outcome of the recount and are instead focusing their energies on fighting the results of the election through the court system or by taking the issue to the floor of the United States Senate.”

That’s how well they’re getting along.

This could make for good TV — is it on anywhere?

On this very same World Wide Web, produced by the State Capitol TV crew. Go here for all the action, which begins at 9:30 a.m. Recount Standard Time.

Coleman-Franken Recount: 10 questions (and even some answers) about why Friday is a really — no kidding — ginormously important day