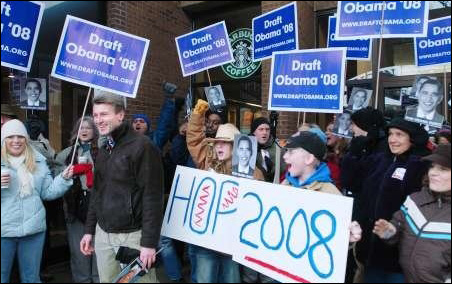 Photo courtesy of R.T. Rybak
Minneapolis Mayor R.T. Rybak, one of the earliest supporters of Barack Obama, took part in this Draft Obama March in January 2007.

In the spring of 2005, a young Illinois senator came to Minnesota to speak at a DFL fundraiser. Minneapolis Mayor R.T. Rybak, St. Paul Mayor Chris Coleman, a couple of their top aides and a smattering of kids had 15 minutes to meet with the visitor.

The session turned into a Rybak sales pitch.

“I might have been a little overboard,” Rybak recalled. “But I was determined to make the most of the time.”

Rybak didn’t let up. The others in the room stood a bit back, surprised at Rybak’s enthusiastic single-mindedness.

Rybak nodded, impatiently. When Obama finished his explanation, there was more conversation.

Rybak: “It’s not often a single person with a single action can change the world. I think you can.”

Obama: “Your eyes are really intense.”

That ended the meeting. Rybak didn’t have a chance to tell Obama that in previous elections, he’d supported former Minneapolis Police Chief Tony Bouza for governor and Bill Bradley and Howard Dean for president.

“I kept my reverse Midas touch to myself,” Rybak confessed.

Rybak didn’t hear from Obama for several months.  But through the summer of 2005, the mayor worked with a loosely connected, national “draft Obama” movement.

“I think I might have been the only elected official in the group,” said Rybak, who had become fascinated by Obama after listening to his 2004 speech at the Democratic National Convention and reading his books.  Rybak believed that Obama could touch the same nerve for a change in politics that Dean had touched in his out-of-nowhere candidacy in 2004.

This “ragtag” movement started a “draft Obama” web page. Nine months after that first meeting with Obama, Rybak wrote a piece on the site.

“I wrote something like, ‘Barack is great but we must remember, this is not about him, this is about leading a movement from the bottom up.’ ”

A day later, the phone rang in the mayor’s office.

“It’s Barack Obama!” an aide said to the mayor.

Rybak: “Is that because I’m part Kenyan?”

Obama: “You were right. This is not about me. But I can lead a movement to take the country back.”

Rybak: “The second you announce, I’ll be ready to support you.”

This was not exactly a startling revelation. Rybak had been supporting Obama for months. For example, a month before Obama announced his candidacy — Feb. 11, 2007 — Rybak had joined with a group of people at a “draft Obama” rally in Uptown.

Obama acknowledged Rybak’s early support when he stopped at the Target Center during a campaign event this summer.

“The person who knew I was running before I did,” is how Obama described the mayor.

Once Obama did announce, the mayor got seriously fired up.  At one point, he went with a van filled with University of Minnesota students to campaign for Obama in Buffalo Corners, Iowa.

“Our goal was to to knock on every door in that town,” said Obama. “What was amazing about that, here we were, knocking on doors in a small town in Iowa for a man named Barack Obama and no one was showing any concern about who he was. They wanted to know about what he stood for.”

Obama, of course, won the Iowa caucuses, a victory that propelled him to the Democratic nomination. After Obama gave his acceptance speech at the Democratic National Convention, Rybak raced to where the Iowa delegation was seated and jumped up on a chair.

“I promised them I’d never tell another Iowa joke in my life,” Rybak said.

Since the election, Rybak has not heard from Obama.

He does not anticipate job offers to join the Obama administration.

“That’s not why I was involved,” Rybak said. “I’ve got the job I always wanted.”

But couldn’t he be tempted to work for Obama?

“I suppose, for the good of the country, I could be talked into being the ambassador to Tahiti during the winter months,” Rybak said.