Pimento, the resident chicken at the Wild Rumpus bookstore, doesn’t see it.

Like poultry’s version of the Pied Piper, Pimento leads a steady stream of adoring kids up and down the aisles of the funky Minneapolis store while their parents browse and buy, browse and buy.

Let that be a lesson in perspective.

Look hard enough. Take the right view. And you can see light in the gloomy economic picture that is 2008.

Yes, Minnesota employers cut 10,500 jobs in November. But 2.7 million Minnesotans still had jobs, many of them secure with decent prospects for rising incomes next year. The blessings they can count this holiday season include 70 percent discounts in the stores, relative bargains at the gas pumps and prospects for refinancing homes at the lowest interest rates in 50 years.

Warm glow in some sectors
Like the Wild Rumpus, some businesses — both large and small — are thriving.

“There are many banks that have dodged a lot of the bullets,” in this year’s financial meltdown, said Scott Anderson, senior economist at the Minneapolis office of Wells Fargo & Co. “A number of community banks didn’t hold mortgage-backed securities . . . even the big banks like Wells Fargo and U.S. Bank were better positioned when this financial crisis hit.”

Now cheap money is flowing to those banks courtesy of Washington’s efforts to stimulate the nation’s economy. 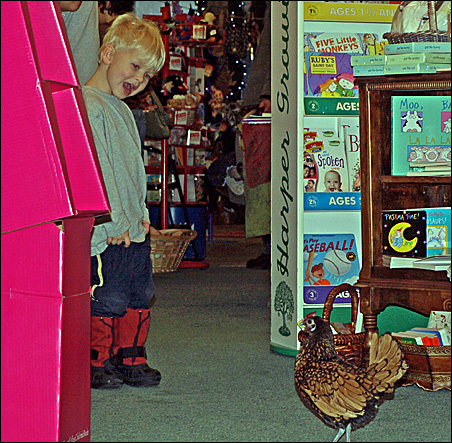 Wal-Mart is happy. So are Minnesota’s farmers who are spreading the returns from a profitable year to others in their communities.

“While there may not be many bright spots in the Minnesota economy, it seems like there are a few sectors, including agriculture, where there is still a warm glow,” said Rob Grunewald, associate economist at the Federal Reserve Bank of Minneapolis.

Blame the reporters
Follow the news and you would think the stores were as empty as Minnesota’s beaches in January. But that’s not the case. To be sure, America’s Research Group’s annual Christmas surveys found that 36.7 percent of shoppers nationwide are spending less this year. But doesn’t it follow that nearly two thirds of shoppers aren’t cutting back? We rarely see them in the headlines.

I hesitate to make this case because it inevitably leads to the familiar call to blame the media. You know the argument: reporters obsess on the bad stuff. I plead guilty. We generally don’t cover the planes that land safely — and, in this case, the workers who hold onto jobs and the shoppers who spend as freely as ever.

In defense of the media, there are compelling reasons to report this recession in its full and frightening dimensions.

The near collapse of the American auto makers is but one example of the risks that business failures will snowball taking out jobs in tiers of related industries. We would be hard-hearted grinches if we didn’t care about the millions of people who are hanging from the ends of their economic ropes with no money for the next rent payment or even the next meal. And retirees have good reason to worry whether they can trust the markets with what’s left of their nest eggs.

Further, even those with secure jobs have sobering roles to play as policy makers in St. Paul and Washington, D.C., decide how to hoist the economy out of this recession. Politicians will be watching voters nervously as they slash government spending on the one hand and while pumping billions into various bids to jump start recovery.

It is human nature for all of us to feel anxious in times like these, said Connie Wanberg, an expert on unemployment at the University of Minnesota’s Carlson School of Management.

“People can’t help but worry, ‘Is this going to hit my job?'” she said.

Savor small gems
But there has to be a point where we can turn a corner and see at least a little sunshine. The economy may take a year or more to recover, many experts say. Meanwhile many people — like George Bailey in Frank Capra’s classic film “It’s a Wonderful Life” — are learning to savor little gems in their lives that they may not have fully appreciated.

Vickie Hawkins saw “people in ditches all over the place” while she and her family drove through Saturday’s snowstorm from Coon Rapids to south Minneapolis. They came looking for the warm diversion the Wild Rumpus offered her grandkids who were visiting for the holidays.

The store holds its own, said Hawkins and other shoppers, because it is unique —  a place where the magic of books is cradled by a creative jumble of animals and art. While Pimento patrolled the aisles, an orange-tabby cat snoozed under a cage where three birds sang with gusto. A pair of chinchillas napped nearby. Anne Frank gazed from one of the book posters across comfy old reading chairs to a veritable zoo of toy tigers and bears.

“It’s getting back to the basics,” Hawkins summed up the store’s success during hard times. “People want to get out of that big box mentality.”

Chris Hahn, who teaches sixth grade in Bloomington, said his students find a good selection of books in the store along with an enchanting atmosphere: “People are making the trek to shop at a store with character.”

Laurel Severns-Guntzel from Minneapolis said her family decided not to buy a lot of gifts this year and to shop locally for those they do buy.

“This is the kind of place that we would be heartbroken if it went under,” she said. “We want to support the local economy as much as possible.”

Doug Huisken imposed the hands-in-the-pockets rule as his son — Matthew, aged 4 — stalked Pimento. In other words, no grabbing the chicken. It wasn’t easy, but Matthew did his best.

With weak economy, many businesses are deciding they’re in no mood to party hearty for the holidays
By Marisa Helms
12/10/2008