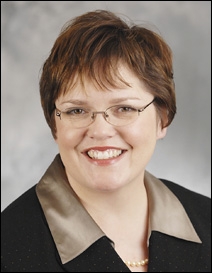 You just know at some point, the fight over how to solve the state’s nearly $5.3 billion deficit is going to get very messy. But for now, the state’s legislative leaders are still not uttering the T-word and are emphasizing cooperation with Republican Gov.
Tim Pawlenty as they begin dealing with both short- and long-range budget shortfalls.

Sitting in a large chapel with vaulted ceilings, the small crowd of about 70 students, senior citizens and a few retired lawmakers listened as the legislative leaders calmly spelled out the disastrous state of the state’s economy.

DFL leaders may have to cut popular programs
With DFLers holding strong majorities in both houses, Kelliher and Pogemiller are in the uncomfortable position of possibly having to bring the ax down on services and programs that some in the party would consider “sacred,” including education, health and human services, and aid to cities.

The House speaker said the budget situation has been a decade in the making, with lawmakers “pushing the problem down the road” and not fixing structural shortcomings along the way. Now, with the economy collapsing all around the state Capitol, and an expected $3.3 billion drop in revenue, Kelliher, quoted state Economist Tom Stinson, calling it “uncharted economic territory.”

“Every day that ticks by, it becomes harder to solve the problem,” she said.

Kelliher and Pogemiller have been talking daily with Pawlenty, who addressed the House DFL caucus over the weekend. Kelliher said the visit illustrated how very serious the budget problem is.

“It’s going to take very hard work from all of us,” said Kelliher. “And when I say all of us, I don’t mean the elected decision-makers. I mean all citizens of Minnesota. It’s going to be very hard work and, frankly, sacrifice on the part of everyone to be able to solve this situation because it is so deep and dramatic.”

Kelliher said she wants lawmakers and the public to have a voice on the budget in the immediate future because decisions will be made fast, starting with the current budget-cycle shortfall of $426 million for the current biennium, which ends in June.

Once the state spends an estimated $155 million from the reserves, Pawlenty has the authority to start cutting from currently authorized funds that haven’t already been spent. He can cut up to $271 million (the remaining balance of the 2009 budget deficit), and he technically can do that without any consultation with the legislative leadership.

“The governor could do that all on his own action,” explained Kelliher. “But I think the governor is interested, and we are very interested, in a more public process engaging legislators.”

Lawmakers avoid the issue of raising taxes
Throughout the hour-and-a-half discussion, both lawmakers brought up several ideas for government efficiencies — and even the need for targeted investments (such as infrastructure and early childhood education) — but never substantially addressed taxes or raising revenue.

“It’s the right thing to do,” said Pogemiller. “I would say the same thing if it was a Democratic governor. We can’t afford it anymore. We can’t afford too many people managing people who are doing the work. We need managers, but it has to be at a much higher level of professionalism and at a much smaller ratio.”

Pogemiller and Kelliher went over other themes they’ve talked about before, including “zero-based budgeting,” an evaluation of every aspect of government agencies and programs to see what kind of return on investment taxpayers are getting. The two say whatever isn’t working also will be on the chopping block.

Several ideas for curing the ailing budget came from audience members. Not surprisingly, taxes came up a few times. One woman suggested legislation increasing taxes on CEOs and big-income earners in the state. Another suggested halting renovation of the new prison in Faribault.

Later, toward the end of the discussion, an exasperated college student asked how it was morally and ethically permissible to not raise taxes when people are out of work, and 10,000 homeless people live on the streets. Her question drew applause from the audience.

Kelliher managed to not discuss taxes in her response, by saying “one thing” won’t solve the problem and that she honestly didn’t know what the best solution is.

There was a clear commitment to not give taxes equal weight in the evening’s budget discussion and to speak about the governor in a neutral to positive light. “We’re trying not to be critical of each other’s activities right now,” Pogemiller remarked, wryly.

“The governor has said he’s going to bring some revenue to the table – it’s not taxes apparently, so I don’t know what it is yet. But it will be interesting. But I think sitting here today, I don’t see – and we’re supposed to be careful how we say this, right, Madam Speaker? – but it’s hard to see how you can balance a deficit without revenue — I don’t see how you can do that. But we’re going to try in the next couple of months.”

Sabo said little during the presentation.

Afterward, when asked what he thinks of the current economic crisis, he said in his nearly 50 years of public service, he couldn’t recall the economy in as much trouble as it is today.

“We’ve had recessions before,” said Sabo. “But the combination of recession and massive deflation of real estate values, I don’t think any of the slowdowns since 1960 have been anywhere as severe and troublesome as this one.”

It had been a long day for Kelliher and Pogemiller. They were both on MPR’s “Midday” show with Gary Eichten  – which turned out to be a rehearsal for the Augsburg event with many of the same issues surfacing.

They’re continuing their “budget road show” in coming days. Today, they’ll be speaking at two budget forums — one in a Bloomington hotel and the other at the State Office Building this afternoon.