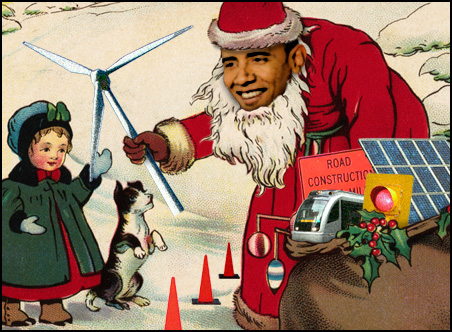 From school safety barriers in Grand Marais to wind farms near Rochester to a sewer system in Blue Earth County, Minnesota has a long list of projects ready to go as President-elect Barack Obama’s proposes to stimulate the nation’s economy with massive investments in public works.

At this point, though, it is pure guesswork to say which of Minnesota’s billions of dollars in worthy projects might win support.

Obama has pledged to put at least 2.5 million people to work by “making the single largest new investment in our national infrastructure since the creation of the federal highway system in the 1950s.”

He outlined his vision in sketchy terms: To gin up jobs in a hurry, priority would be given to “shovel ready” projects already in the pipeline. To also serve his energy agenda, public buildings would be made more energy efficient. Schools, libraries and hospitals would get better internet connections.

While specifics of any plan are months away, state and local officials already are compiling lists of road, bridge, water and energy-related projects that could be started quickly should the funding fall their way.

But the massive plan is sure to hit road blocks and speed bumps in Congress.

Supporters of such public works spending say it is a surer way to create jobs than tax rebates. As crafted by Obama, it also would serve multiple goals by repairing the nation’s crumbling infrastructure, conserving energy and improving schools.

In addition to providing “an immediate stimulus,” Obama said, the projects would be “down payments on the kind of long-term sustainable growth that we need.”

Christopher Phelan is skeptical, though. He is a professor of economics at University of Minnesota and a consultant to the Federal Reserve Bank of Minneapolis.

“The problem with roads and bridges is that by the time you actually start to build them the recession might be over,” Phelan said.

Building and repairing infrastructure is one of the responsibilities we expect government to shoulder, and the United States is overdue for the work. But risks of waste are high if massive sums are handed out in a hurry, Phelan said.

Also high are the odds that priorities will be grounded in politics rather than the merits of each project.

At this point, no one knows how big the pot of money will be, let alone the priorities and rules for spending it.  Some estimates peg it at $500 billion.

Highways and bridges
The Minnesota Department of Transportation has identified 200 projects worth $950 million that could be ready to start within 180 days.

Obama didn’t say what he meant by “shovel ready,” but he did suggest there will be a deadline for getting started: “If a state doesn’t invest the money in roads and bridges it will lose the money.”

Congress could change the parameters — say, call for projects that could be started in 90 days. If that happened, Minnesota’s list would change a lot, said Abigail McKenzie, who directs MNDOT’s Office of Investment Management.

“If we had 90 days we would do quite a bit of pavement rehabilitation, low-cost safety improvements . . . maybe one or two expansion projects where we have a right of way,” McKenzie said.

If the timeframe expanded, larger projects could be candidates, she said.

“It’s all about what are the requirements and the timelines,” she said.

MNDOT has identified $4.7 billion in bridge, highway, road and transit projects that need funding by 2012, and it must count on the federal government for a good share of that investment. So there is no shortage of candidates, McKenzie said.

Whatever the parameters, a burst of brand new highways and bridges is unlikely, said David Levinson, a researcher in the University of Minnesota’s Center for Transportation Studies.

Obama plans to improve the transportation system already in place rather than start from scratch, Levinson said.

The average age of  the United State’s highways and bridges is about 40 years, he said, and many of the bridges were designed for just 40 to 50 years of use so they are due for major repairs or replacement.

Minnesota’s need for investment was made dramatically clear when the I-35W bridge collapsed in 2007, Levinson said. To be sure, there were technical reasons the bridge went down, but it also suffered from the fact that “nobody had invested enough to do proper inspection and modeling,” he said.

Shaken by that disaster, Minnesota already is replacing and repairing dilapidated bridges as fast as funding will allow.

Light rail also is a priority in the Twin Cities. Levinson predicted that light rail and similar transit will be funded “outside the stimulus package” but that the pace of funding for that too will be stepped up.

That effort could create thousands of jobs for workers with an array of skill levels, said Dave Sparby, president and CEO of Northern States Power Co.-Minnesota, an arm of Xcel Energy.

“A whole host of people” are needed to retrofit a commercial building, Sparby said, including engineers and specialists in lighting, heating and air conditioning as well as the people who hang insulation and change light bulbs.

And the energy saving could be substantial.

“There is a wide spectrum of outcomes depending on whether it’s a new building or an old building, but it’s not unreasonable to think of energy savings of up to 30 percent on average,” he said.

Upgrading America’s power grid and modernizing the transmission infrastructure to accommodate renewable energy is expected to be part of the proposed stimulus package. One of Obama’s oft-stated campaign pledges was to create the capacity to capture wind energy in places like North Dakota and transmit it efficiently to population centers like Chicago.

Xcel is “well along in the path of meeting his objectives,” Sparby said, with a program to bring wind energy from the Dakotas, western Minnesota and the Rochester area to the Twin Cities metro area.

Xcel would not expect to get cash grants for such work, but it does rely on tax credits that could be enhanced under the stimulus package.

And Minnesota would be well positioned to take advantage of any incentives the stimulus package might offer to add more renewable energy capability in wind and solar, Sparby said.

Water and sewer
Communities across Minnesota already have identified billions of dollars worth of projects needed to repair and upgrade water and wastewater treatment facilities.

For wastewater alone, the state has a priority list of 260 projects needing $1.8 billion in funding, said Jeff Freeman, who is deputy director of the Minnesota Public Facilities Authority.

Some projects are ready to go, Freeman said.

“We are looking ahead to the possible additional federal funds and being ready for that,” he said. “We are surveying these projects, making sure we know the status and where they are with final designs. The list is somewhat fluid, and we have the ability to add projects which we may do if we get additional money.”

“I want to see how it’s structured,” Pawlenty said. “We’ll see. I don’t want to just have the money go out without some reform in how it’s spent. I don’t want some committee chairman to cherry-pick his pork-barrel project.”

Repeating an unconfirmed rumor that Pawlenty plans to run for president, Levinson at the Center for Transportation Studies said: “I would be surprised if he turned down the money. That would be a political non starter for him.”