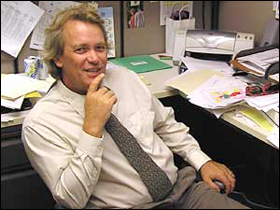 With the nation’s jobless numbers hitting a new high today, what lies ahead for Minnesota’s economy and unemployment picture?

In an interview today with MinnPost, Steve Hine, research director for the state’s Department of Employment and Economic Development, talked about the day’s big news and where Minnesota sits in the national economic picture.

The U.S. Bureau of Labor Statistics reported  an additional 533,000 workers lost jobs in November, bringing the nation’s total number of unemployed to 10.3 million, or 6.7 percent. It’s the biggest monthly increase in 34 years.

Minnesota’s employment numbers for November won’t be released until Dec. 18, but the state’s unemployment rate stood at 6 percent in October.

At both the national and state levels, the actual number of unemployed is substantially higher because of discouraged people who have stopped looking for work or who are no longer eligible for benefits.

Here is the question-and-answer session with Hine:

MinnPost: People are saying the new unemployment numbers out today are signaling that the country’s in what could be the longest recession since the Great Depression. How do today’s jobless numbers fit into the history of past recessions?

Steve Hine: It was only just recently declared that the recession started in December last year, so we’ve just completed a first year of official recession. That’s not as long as some of the recessions in the past — in particular, 1981 and ’82 were longer than that. As was the recession in ’73, ’74, ’75. One comparison that has been made to past recessions that’s accurate is: The one-month loss of 533,000 jobs is the largest one-month loss that we’ve seen since 1974.

MP: The recession is a result of a kind of economic virus, starting with the housing crisis, right?

SH: The housing crisis was certainly the first, at least the most obvious, early indication we had of pending difficulties. People have had difficulty buying and selling homes and then getting credit and mortgages. We’ve also seen a dramatic decrease in the wealth that people have accumulated in their homes, and of course that’s tumbled into the stock market and other kinds of financial assets. So you’ve got a number of things impacting consumers’ ability to spend money. And businesses won’t hire if consumers aren’t buying. We’re seeing that most markedly right now in the retail sales figures that have just come out with some pretty dramatic declines in over-the-year sales at a very important time for the retail sector.

MP: The Bureau of Labor Statistics report today says the job losses are “large and widespread” across industry sectors. But retail is definitely among the hardest hit.

SH: It is being hard hit. Of course, other sectors took a brunt of the hit earlier, construction being the obvious example there. Here in the state, we saw the impact spilling over into areas like wood products manufacturing, windows, things that go into building houses. We’ve seen difficulty in transportation, particularly air transportation with higher fuel prices earlier.

And now there’s a lot of restructuring going on in the airline industry.  So, there are different impacts that some of these events are having on different sectors, and certainly retail right now is going to get a lot of attention because it is an important time of the year for the retail sector to turn a profit.

But, there are very few sectors — with the exception of health care services — that have not felt the impact of the recession. That sector’s made up of doctor’s offices, hospitals, nursing care facilities. All of those have managed to continue to grow, although at a slower rate more recently than they did throughout the 2000-2001 recession. So even there, although the health care sector remains up over last year, the rate of growth has been diminished.

SH: Very closely, yes. We’ve been going downhill right in lockstep with the nation in terms of jobs. It’s too early to tell what the November number will look like and whether we’ll lose jobs with the same order of magnitude. But, we’re interlocked with the national economy, and we’re not going to move in the opposite direction for very long. And so, with the job losses now at the national level covering 11 straight months now, we’re certainly seeing the impact here in Minnesota.

MP: Aside from health care, are there any other sectors holding up in Minnesota?

SH: One area that we’ve continued to do well in, relative to the nation — and by that, I mean we’re adding some jobs — is in financial activities. We’ve got a fairly strong financial sector here, not prone to some of the same weaknesses and instabilities that have plagued other parts of the country like New York. Although the precipitous decline we’re seeing nationally is certainly great enough that that may change. Although, it’s early to say right now.

MP: Given the $5 billion state deficit announced yesterday, what should the state response be to help with this bleak job picture?

SH: The department (DEED) does have a lot of programs meant to identify appropriate job opportunities for job seekers to get them matched, and get them employment. Even in times when we’re losing jobs at a fairly brisk rate like this, it’s still the case that people are hiring, people are finding jobs.

A dynamic economy continues to create jobs. It may not do so at a rate adequate to absorb the people that are simultaneously losing them, but a lot of the programs are designed to try to match people as quickly as possible with jobs that are created even in the worst of times. Of course, a lot of the programs here, too, are meant to provide unemployment insurance benefits [and] income support to those people while they do search for work.

MP: Minnesota’s jobless rate in October was 6 percent (about 175,000 people). What do you predict for your November numbers?

MP: So, it’s likely to be higher than 6 percent in November?

SH: Yeah. I think anybody would have to expect that, with over half a million jobs lost nationally, that some of those job losses occurred in Minnesota.

Help for job seekers
Looking for work? Here’s a list of tips (PDF) from the Minnesota Department of Employment and Economic Development.