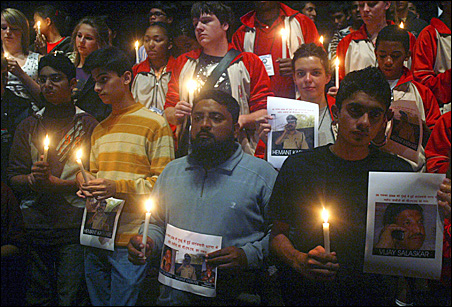 REUTERS/Pawan Kumar
Students from Pakistan hold candles inside a Lucknow school auditorium in memory of those who were killed in the Mumbai attack. The recent terrorism has further complicated relations between India and Pakistan.

While last month’s murderous attacks on Mumbai fade from the headlines, pressure rises on President-elect Barack Obama to confront underlying problems  — not in India, but in Pakistan, where the bloody assaults allegedly were plotted and controlled.

Obama inherits a vexing contradiction in U.S. policy toward Pakistan. Since 2001, Washington has treated it as a key ally in the fight against terrorism. But the Mumbai attacks lend evidence to the charge that Pakistan also is command central for terrorism in the region and a safe house for dangerous leaders of terrorist groups.

Obama has a real opportunity to defuse tension in the region, said Prakash Puram, of Edina, who advises companies on trade between the United States and India.

But Obama also faces incredibly complex challenges in the nexus between two nuclear powers that have battled each other for years.

The deaths of more than 160 people in Mumbai serve as grim notice that nothing has been accomplished by Bush Administration demands that Pakistan’s leaders crack down on militant radical groups, said Professor William Beeman, a scholar of the region who chairs the University of Minnesota Anthropology Department and also has been a consultant for the United Nations and the departments of State and Defense.

“They now flourish in parts of Pakistan that are outside the control of the central government,” he said.

The group that Indian officials have accused of masterminding the Mumbai attacks is Lashkar-e-Taiba, or Army of the Pure and Righteous. A Lashkar spokesman has denied the charge, but it is widely supported by officials and analysts outside India.

Founded as part of a movement to oppose the Soviet presence in Afghanistan in the 1980s, the organization presumably fought on the same side as the United States at one time. Over the years, though, the group’s prime focus has been on the Pakistani-Indian conflict over Kashmir, and it’s prime goal has been to establish Islamic rule throughout South Asia, said a U.S. Congressional Research Service report. (PDF)

Now, the group is on the State Department’s list of terrorist organizations.

Lashkar’s leaders have “spread ideology advocating terrorism, as well as virulent rhetoric condemning the United States, India, Israel and other perceived enemies,” said a State Department report. Among other charges, the United States claims that Lashkar has collaborated with al-Qaeda. Abu Zubaydah, a senior al-Qaeda lieutenant, was captured at a Lashkar safe house in Faisalabad in March 2002.

Under pressure from Washington, the Pakistani government officially banned the group in 2002 and froze its assets. But it has continued to operate more or less openly while al-Qaeda leaders hid in caves. It is armed with assault rifles, light and heavy machine guns, mortars, explosives and rocket-propelled grenades, the State Department report said.

Beeman is among many foreign policy analysts who agreed last week with the Indian government’s claim that Lashkar is linked to the Pakistani Intelligence Service (ISI).

“The difficulty President-elect Obama faces is that the Pakistani Intelligence Service has been complicit in supporting Islamic extremists ever since the (Afghan-Soviet) war,” Beeman said. “They were in direct support of the Taliban. The groups exist as kind of a law until themselves … independent in some ways but also allied to the Pakistani military.”

Pakistani officials have denied any connection to the Mumbai attacks, and U.S. Secretary of State Condoleezza Rice said over the weekend in an interview with CNN’s Wolf Blitzer, “I don’t think that there is compelling evidence of involvement of Pakistani officials.” But Rice added: “I do think that Pakistan has a responsibility to act. And it doesn’t matter that (the perpetrators of the attacks) are non-state actors.”

Other U.S. officials, though told the New York Times that Lashkar has “quietly gained strength in recent years with the help of Pakistan’s main spy service, assistance that has allowed the group to train and raise money while other militants have been under siege.” The Times report on Monday quoted mostly unnamed  American intelligence and counterterrorism officials.

“The ISI has shared intelligence with Lashkar and provided protection for it,” the Times said. “American spy agencies have documented regular meetings between the ISI and Lashkar operatives, in which the two organizations have shared intelligence about Indian operations in Kashmir.”

Lashkar expanding influence with Islamic militants
One major concern arising from the siege at Mumbai is that Lashkar is expanding its influence on Islamic militants outside Pakistan. And authorities are investigating alleged support Indians provided to Pakistani perpetrators of the killings in hotels and other Mumbai sites.

“The Mumbai attacks, which included foreigners among its targets, seemed to fit the group’s evolving emphasis and determination to elevate its profile in the global jihadist constellation,” the New York Times said.

Leaders of Pakistan’s security forces said Monday that they had raided the camp of the militant group responsible for the Mumbai siege and seized at least one leader, Reuters reported.

But it remains to be seen during the first few months of Obama’s presidency how effective any government crackdown will be.

For years, the central government in Islamabad has tried to play it both ways, Beeman said, appearing to cooperate with the United States while allowing militant groups to operate in the shadows. Former President and Prime Minister Pervez Musharraf raked in millions of dollars worth of U.S. aid while making a show of hunting al-Qaeda leader Osama bin Laden and banning groups like Lashkar.

Musharraf, who had seized power in 1999 in a military coup d’etat, cleverly played double agent between the United States and the militant groups, Beeman said.

“He knew that if Osama bin Laden was captured, that would mean the end of the money from the United States,” he said. “So he prevaricated … diddled and daddled and dawdled and kept the money.”

The truth probably was that even strongman Musharraf lacked the power to break up the groups.

“Once these extremist groups were well established within the framework of Pakistani society, he couldn’t do anything to stop them,” Beeman said. “He didn’t have any mechanism for curtailing their activities.”

Zardari’s hold on the country is so precarious that it would be futile for Obama to insist he assert control over the militant groups.

“Zardari can’t,” Beeman said. “He has absolutely no power.”

Short of working behind the scenes with Pakistani military leaders who do have some power, Obama has few options.

If he ended support for Zardari’s government, it could collapse. There is grave danger that extremists on two fronts — those who direct violence toward the West and others galvanized by the conflict in Kashmir — would overwhelm the country, Beeman said.

“When Musharraf was in power and the United States was shoveling millions into supporting him, I was part of the vanguard saying don’t do it,” Beeman said. “So, now what do we do? The answer is, ‘You shouldn’t have done what you did to begin with.’ “

Obama facing pressure to support India
Meanwhile, Obama will be under pressure to ratchet up American support for India as it moves to punish the Pakistani groups. With both nations nuclear-armed, the tension is dangerously high.

Washington’s warm relations with the Pakistani government have made no sense to India, said Puram of Edina. He serves on an economic council for President Bush and also sits on a business advisory council for the Federal Reserve Bank of Minneapolis.

“The United States has done everything to take sides with Pakistan,” Puram said. “Now President-elect Obama is faced with the dilemma: Do I take sides with India at the risk of alienating Pakistan?’.”

Obama can’t afford to shun India, a democracy and a rising economic power, he said.

“We should give India the importance it is due because it is the only way to restore our credibility in the world community, and it’s the right thing to do,” he said. “To continue to support the wrong person, the bad guy, is like kids supporting the bully.”

Puram respects Obama’s tough tradeoffs, given that Pakistan controls access to its mountainous Wazristan region, where bin Laden and other militant leaders hide and stage their operations.

Obama is moving to step up American forces in Afghanistan, and he has pledged to hunt down bin Laden. But Waziristan, not Afghanistan, is the “epicenter of the terrorism universe,” Puram said.

“If we turn off Pakistan and support India, how do we get access to Waziristan and what will President-elect Obama do about bin Laden?” he asked.

Obama’s only real solution is to work to bring Afghanistan, Pakistan and India together, Puram said.

“We need all three parties, and we need harmony between the three of them,” he said. “If we don’t do it, the Russians will come in and do it, or India eventually will try to go in and clean out Pakistan.”

As part of a peace process, Puram calls for the United States to help mediate Indian-Pakistani differences over Kashmir. Before he was elected, Obama signaled an interest in playing mediator in some capacity in the long-standing conflict. Many informed observers say that could be a mistake for the United States, and Beeman doubted greater Pakistan would honor any agreement forged by the weak leadership in Islamabad.

But Puram insisted that all sides have powerful reasons to cooperate: India could stop the terrorist attacks that have killed tens of thousands of its civilians in this decade, Pakistan could have a chance at greater stability and true democracy and Afghanistan could concentrate on beating back the Taliban.

“This presents one of the greatest opportunities for America in this century to show global leadership,” he said.

Economic ties between Minnesota and India promise to be a busy two-way street
By Dr. Bruce Corrie
11/13/2007

An opportunity, but a vexing contradiction awaits Obama on Pakistan policy