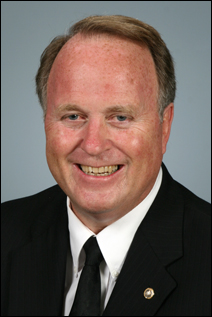 Before he even was asked a
question, Dean Barkley had an answer.

“No, I don’t want to be the senator of Illinois,” the Independence Party’s candidate for Senate said. “But with Franken’s fundraising ability, he’d be a natural.”

Barkley, who in recent years has
been a campaign manager, the owner-operator of a car wash, a
Metro Mobility bus driver, a chief executive of a bus company, a U.S. senator (for a brief time), a state government administrator, a political candidate, is going back to his roots as an attorney. Barkley has accepted a position in the Bloomington law firm of Villaume and Schiek.

“I’m going back to the real world and work at saving the world one client at a time,” he said.

Barkley, who received 15 percent of the vote in the U.S. Senate race without end, doesn’t know if his days as a candidate are over.

And he says he has nothing new to say about Minnesota’s Political Story of the Moment: the continued recount squabbling between the campaigns of Al Franken and Sen. Norm Coleman.

Last month, Barkley told MinnPost  of his unhappiness with how the race is turning out. “It’s kind of like getting dog stuff on your shoe,” he said in an interview then. “You can wipe it off, but you just can’t get away from the smell.”

He said at the time that the recount drama is “a fitting end to the worst campaign in Minnesota history, the campaign that will not go away. It’s no different than the campaign. It’s the hatred both of them have with each other. And it’s going to get worse before it gets better.”

Barkley, 58, said he does hope to become active in the hierarchy of the Independence Party.

“I’ve volunteered to be on the executive committee,” said Barkley, who essentially founded the IP movement in Minnesota when he ran in 1992 as a candidate for Congress under the banner of the then-Reform Party. “I’ve been out (of the party apparatus) for about 10 years. If they want to have me back, I’d be glad to offer guidance.”

He’d like to help Independence Party strengthen fundraising
The biggest area of concern is strengthening the party’s ability to raise money between elections so “each candidate doesn’t have to start from scratch.”

In his case, Barkley entered the race with nothing and spent most of October attempting to raise money. His goal was to raise $500,000, which he thought would allow him to put up some statewide commercials in what was the costliest – and ugliest – Senate race in the state’s history. He didn’t come close to reaching that goal.

Additionally, Barkley will help push the IP goal of implementing an Instant Runoff Voting system in Minnesota. That system might have spared the state the current recount – and it might have made Barkley the winner because there’s a strong chance he would have been the second choice of the majority of Minnesota voters.

“I would have been the best golfer in the Senate,” said Barkley.

But he doesn’t spend much time on the might-have-beens.