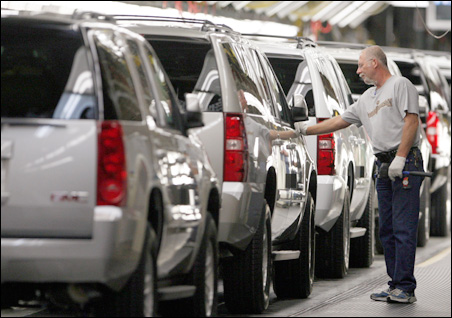 A plan to bail out Detroit’s automakers broke down in the Senate last night over when wages of union workers would be cut to the same level as those paid to nonunion workers at U.S. plants of foreign automakers such as Toyota and Honda. The Senate’s rejection of the bailout is prompting bitter reactions and dire predictions.

Senate majority leader Harry Reid of Nevada: “It’s over with,” Reid said Thursday night. “I dread looking at Wall Street tomorrow. It’s not going to be a pleasant sight. This is going to be a very, very bad Christmas for a lot of people as a result of what takes place here tonight.”

Senate Republican leader Mitch McConnell of Kentucky: “We have had before us this whole question of the viability of the American automobile manufacturers. None of us want to see them go down, but very few of us had anything to do with the dilemma that they have created for themselves.

“The administration negotiated in good faith with the Democratic majority a proposal that was simply unacceptable to the vast majority of our side because we thought it frankly wouldn’t work.”

The Financial Times of London: “The growing crisis for America’s carmakers has pushed some European governments into emergency arrangements for their affiliates on the continent. ‘The only government not helping right now is the US,’ said Nelson Silveira, a spokesman for GM Europe in Zurich.”

Columnist David Howes writing in the Detroit News: “Now a federal bailout for Detroit’s automakers appears close to dead, delivering a crushing blow to a Michigan economy reeling from high unemployment, skyrocketing home foreclosures and sagging tax revenue. The obstructionists: southern Republicans determined to use a financial crisis to rework corporate balance sheets and rewrite collective bargaining agreements on their terms and timetables.

“Paybacks can be hell when business meets politics, as union leaders, their members and tens of thousands of folks associated with the Detroit-based auto industry are seeing clearly in the wrangling to craft an emergency bill to throw lifelines to beleaguered General Motors Corp. and Chrysler LLC.

“Stripped bare and put in the regional context of union vs. nonunion and domestic vs. foreign, the toughened conditions pushed by Sen. Bob Corker, R-Tenn., are legislative cruise missiles aimed directly at Detroit’s business model, the UAW’s Solidarity House and 70 years of Big Three bargaining tradition.

“How could they be anything else? Immediately match the pay and benefits of foreign-owned automakers operating in the South, his terms say. Reduce your expectations for Big Three contributions to the barely funded retiree health care fund and take some in stock. Eliminate the Jobs Bank and supplemental unemployment benefits.”

Naftali Bendavid writing in the Wall Street Journal: “Sen. Richard Shelby, a jut-jawed lawmaker embodying the hostility many in Congress feel toward the Big Three auto makers, has emerged as the face of the opposition during the debate over aiding the industry.

“Mr. Shelby’s objections are rooted in the interplay of long-held principle and home-state interest. The Democrat-turned-Republican has always been opposed to bailouts and big government. At the same time, his state of Alabama is home to manufacturing outposts of several foreign auto makers — including Toyota Motor Corp., Honda Motor Co., Hyundai Motor Co. and Daimler AG’s Mercedes-Benz — that have competed successfully with U.S. auto companies.”

Columnist Tom Walsh writing in the Detroit Free Press: “None of the logical arguments made by, or on behalf of, Detroit’s auto industry seem to resonate with certain congressional critics.

“No, to the most adamant auto-rescue opponents in the Senate, Detroit doesn’t make cars people want. It’s a dinosaur not worth preserving.

“Could the opinions of these senators be colored by the fact that the foreign-owned plants of Toyota, Honda, Hyundai, Kia, BMW, Nissan and Volkswagen — which compete with the Detroit Three — are located in their states?

“Nah, let’s not even go there.

“Let’s just say that since logic hasn’t worked, we should fall back on a simple moral argument.

“If you see a fellow American is drowning, gasping for air, do you quiz him for a while about whether he’s drunk or why he never learned to swim better? Or do you throw him a life buoy and ask questions later?

“That, it seems to me, is where we are with America’s car companies.

“You have done nothing and failed them, senators.”

Editorial in Detroit Free Press: “The final sticking point apparently was when — not whether — UAW workers would have the same wages for as the foreign automakers pay. That will seem like an incredibly minor dispute in the face of an industry collapse, and — in many people’s eyes — an anchor to hang around organized labor for the rest of recorded history.”

White House press secretary Dana Perino: “Congress spoke last night. They don’t have the votes to do anything. They didn’t get it over goal line and so we have to consider what other options we would take.”

Jim Mitchell blogging in the Dallas Morning News: “Has Bush, who just a week ago said some automakers might fail, changed his view at this late date? Or was the past week of mostly Republican opposition to the bailout more political theater while the economy burns?

“In other words, did Bush give Republicans lawmakers, who will eventually have to stand for re-election, the political cover to reflect public opinon and rail against the bailout in the full knowledge that Congress wouldn’t act and that this would leave Democrats out on a limb?”

Roger Buoen is a MinnPost managing editor. He can be reached at rbuoen [at] minnpost [dot] com.