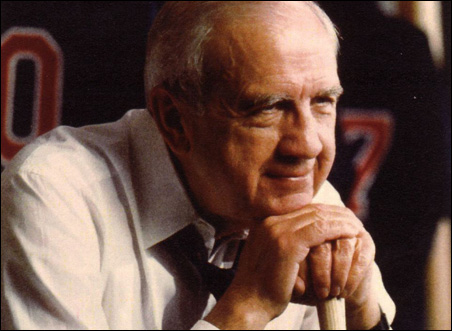 Courtesy of the Pohlad family

The glory of the sun shined through the spectacular stained glass of the Basilica of St. Mary this afternoon, the downtown Minneapolis sanctuary filled with 1,200 celebrants of the long, abundant, complicated, tough and oft-times controversial life of Carl Pohlad.

Pohlad’s 93 years took many paths, from poor Iowa kid to college boxer to World War II GI to banker and dealmaker extraordinaire, from father, husband and grandfather to bad guy in business and, as time wore on and history might one day record, good guy for baseball in Minnesota.

The different aspects of his life were on display today, as Hall of Famer Harmon Killebrew sat in one pew, businessman/partner Irwin Jacobs sat in another, Hennepin County Commissioner Mike Opat, who fought for a new Twins ballpark, sat in another still, as did (former?) Sen. Norm Coleman and Tony Oliva and Paul Molitor and Pohlad’s close friend, baseball commissioner Bud Selig.

The three Pohlad sons — Bob, chairman of Pepsi Americas; Bill, the film producer; and Jim Pohlad, who has been overseeing Twins business for years now — each offered touching eulogies.

Jim spoke of his father’s passion for work.

Bill spoke of his father’s ability to tell scary bedtime stories and talked of “the media assault” on his father as Twins owner.

Bob, the most eloquent and emotional, talked of four words to describe his father: successful, complicated, simple and heart.

He talked of their brief family vacations: “We once went to Europe, six countries in five days.”

The church exploded in laughter.

“Our dad is the American dream, so much from so little; yet to many, he was the rich guy,” Bob Pohlad said. “Few bothered to know he came from far less than most who wanted to make him a bad guy because he was so rich.”

They all remembered their mother, Eloise, who died five years ago.

In a remarkable moment, Bob Pohlad called out the names of 20 caregivers who worked ’round the clock to take care of his parents in their final days. He asked each person to stand. Many were in tears.

If there were ever any doubt that the Pohlad family was somehow going to fade as a powerful force in the Twin Cities, that was laid to rest with the patriarch today.

Jim Pohlad said like “parachutists waiting in line to jump … it is our turn,” and he meant the three sons and the many grandchildren to carry on the Pohlad legacy.

For a man who had been so blasted by the public during a decade of stadium debate, it was clear from the attendance today that he was, indeed, a public person. And, yet, as we are all wont to forget, even one-time public villains are full-time fathers and husbands.

It should be noted that the Twins were mentioned rarely during the service, among the references one by Bill as he spoke of the excitement his father felt buying them, and another by Archbishop John Neinstedt, who ended the service with a baseball-laced prayer.

As the lovely music was sung, as the grandchildren offered prayers, a person’s mind could wander and gaze off into the stained glass.

I got to thinking about the first time I met Carl. It was at his former Marquette Bank headquarters on the skyway level of the IDS building, a short walk from where his coffin lay today.

Doug Grow, my colleague then (and now), and I conducted an interview with Pohlad soon after he bought the Twins in 1984. 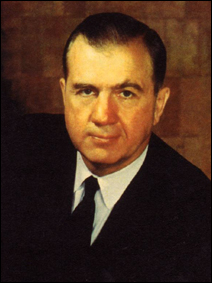 He was a chipper 70-year-old then, more spry than stylish, his hair a bit over his ears, with bushy sideburns. He seemed then the part of a Hollywood producer, not a Minnesota banker with roots in Iowa.

He was positively driven about selling tickets for a team that had been failing under former owner Calvin Griffith. But owning the team was just one of his jobs. As his sons pointed out, the man was known to work all the time.

I asked him what he did besides work. He offered me his toothy, crooked grin. And then he went on to answer in his mumbly revealing ramble.

“Well, now, when you say work, I was in California last month and I spent 45 minutes to an hour talking with [former ITT chairman] Harold Geneen,” Pohlad said then. “We got talking about the business of working. It isn’t money. It’s a way of life. It’s a disease … I dread the thought of going to Florida or Arizona because all I see is a bunch of old guys with the Wall Street Journal under one arm and the mail in the other, and they don’t have anything else to do the rest of the day. This is just my way of life.”

And, of course, he did go to work every day until, just recently, when he couldn’t.

Only zeroes
I flashed to another personal moment with Pohlad.

Time and the baseball business had moved on. The Metrodome became economically obsolete for a modern baseball franchise, and politically charged stadium battles ensued. Pohlad and his advisers made their share of errors. Pohlad, as his son noted, became the “bad guy,” an image he’d acquired in the Twin Cities because of some earlier non-sports deals, too.

For all sorts of reasons in 1997, Pohlad feigned as if he were about to sell the team to a fellow named Don Beaver, who would move the team to Greensboro, N.C.

Believe me, that was never going to happen, but Pohlad went through the motions to leverage support for a ballpark in Minnesota.

There were Major League Baseball owners meetings in Atlanta, and I covered them. At those meetings, Pohlad and Beaver conducted negotiations.

By then, soon after back surgery, Pohlad, in his early 80s, needed a walker to get around the lobby of the Ritz Carlton in Atlanta.

One night as he headed towards the elevator, he motioned to me.

“Call me tonight,” he said. “I might have something for you.”

The man was crafty. But during these meetings, he was in his heaven. You should know that by the late ’90s, he had become the last of an ancient breed: the single owner in baseball with his own money in his team. Mega-corporations, media conglomerates and diverse partnerships were buying up baseball teams.

But Carl Pohlad stood proudly alone in a game much more fun than banking.

And, unlike that sometimes tarnished reputation in Twin Cities business circles, he was truly beloved and respected in the baseball industry. It was an odd disconnect.

As it turned out, Pohlad didn’t see me until the next morning when he told me that he and Beaver were dickering on a price for the sale of the Twins.

Big news. No dot-com then. Had to hold it for hours for the old newspaper.

“How do you do that?” I asked him of setting a price on a supposedly moving baseball franchise. “I’ve never been involved in such a big deal.”

I told him, I think, that the biggest deal I ever struck was to refurbish my kitchen.

He leaned over his walker and got real close to me, as if to tell me a secret, as if to teach me not to be intimidated by a big deal.

His deal with Beaver never happened.  The Twins were more than a row of zeroes to Pohlad.

What would you do?
Which leads to the last full interview I conducted with him, a decade ago.

A little bit more than a year after the Atlanta event, the stadium debate lingered, and I was working on my soon-to-be not-very-best-selling book, “Stadium Games.”

Pohlad agreed to see me in his new offices, high above downtown Minneapolis and he was in a frustrated mood. He was getting whacked in the media by smart-alecky columnists and portrayed as Mr. Cheap.

“I’m only human,” he told me of his feelings on hearing such attacks.

We began chatting about the knickknacks in his office, of Western art and replicas of jet airliners when he asked me, then — and even more in retrospect — an amazing question: “What would you do?”

He meant, if I were Carl Pohlad and were in the spot he was, how would I handle it?

Looking back, I’m shocked I didn’t laugh out loud. Instead, I cleared my throat and told him I’d improve the Twins, make the team a worthy product and then I’d pay for the new stadium myself.

He was too shocked to smile. He cocked his head crookedly. His back was hurting him.

He didn’t yell at me. He was simply stunned I was so stupid. 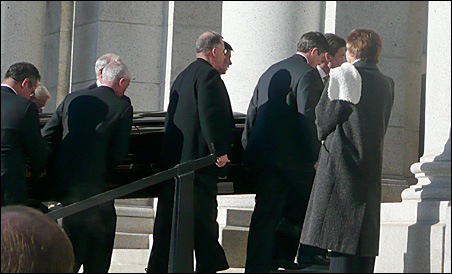 It took another eight years for a Twins ballpark bill to pass. In the end, Pohlad invested about $167 million into the $517 million project.

The priest sang “Danny Boy,” and the casket moved up the aisle, out the door, into the hearse. Nearby a freeway buzzed. A few blocks to the north a structure was rising, a baseball stadium, “a ballpark,” he insisted on calling it.

I’m told a few months back, Carl Pohlad, in his wheelchair, got to see that edifice known already as Target Field. I’m told a construction worker showed him around. The American dream, indeed.