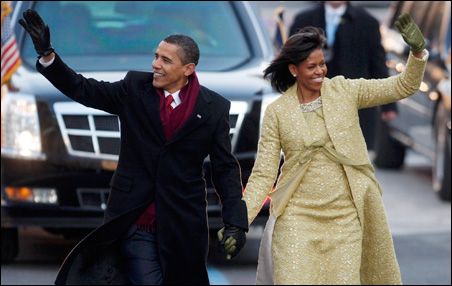 By now all 100 tons of inaugural garbage have been removed from the Washington Mall, a sign that the collective dust has settled.

Malia and Sasha are back in school, and their dad has gone to work.

The party is over.

And so a week after the frenzied whirlwind of inaugural celebrations, I had a moment to think about what Barack Obama’s presidency means to me, personally.

The answer extends far beyond the obvious responses of race and genealogy. Yes, I was and still am greatly moved by the inauguration of this country’s first African-American president. But what struck me more was his wife.

As soon as she emerged from Blair House I started to weep. The image of her perfectly coifed tresses caused me to think back to all the times as a black woman I have called or walked into a hair salon only to be told, “We don’t do ethnic hair.” As if somehow my thick and curly locks belonged to a subset not worthy of the masses. The issue of black women and their hair has always been a sensitive one (as illustrated by the now infamous Don Imus quip).

To hear “We don’t do ethnic hair” hurts. But maybe that will change now that the hairdresser to the first lady of the United States of America does. Stylist Johnny Wright has already inked his own reality TV deal, appealing to producers who recognized the lack of people of color in reality-style shows.

(In all fairness, one of the best blow combs I ever received was from a lovely blonde-haired, blue-eyed stylist in Wayzata named Amy Jo — who, unlike her colleagues, had taken the time to learn how to style textured hair.)

It’s not easy being green
Then there was Michelle Obama’s wardrobe.

I have never owned a pair of green shoes in my life. Or green gloves. And I probably never will. While the fashion pundits went back and forth before deciding that Michelle’s  Isabel Toledo’s inaugural frock was a pick and not a pan, I’m of the opinion such discussions are irrelevant.

What spoke most to me about Michelle Obama’s ensemble was that it represented what fashion was meant to express in the first place: individuality and personal style. From the jeweled neckline and overcoat of her daytime outfit to the white ball gown with playful sparkling tufts, the first lady’s choices represented a willingness to be true to herself irrespective of style “experts” who had hoped for something else. Yes, we can thank Jackie O for the pillbox hat and timeless strand of pearls. But I thank Mrs. O for daring individuality.

First mom
This is where I really get choked up; when I see images of Malia and Sasha Obama. Good looks and great genes notwithstanding, these two little girls have an inner sparkle that, as a mother, speaks volumes to me. That’s something that can’t be faked. Absent is the telltale listlessness we too frequently see in children, a subtle and sad indicator of an inner void not yet filled. The constant twinkle in 7-year-old Sasha’s eyes and 10-year-old Malia’s mature-beyond-her-years self-assuredness is no accident, but rather hallmarks of intentional parenting.

Somehow during the odyssey between Chicago, Springfield and Washington, Barack and Michelle Obama’s little girls have managed to maintain their innocence and a sense of self. Credit Michelle or Michelle’s mother or both. Credit Barack. Credit the family. It is evident to me from my very distant vantage point that somebody in that family understands that “parent” is a verb.

Mrs. Manners
And finally, a white box tied with a red bow was presented as a gift to outgoing first lady Laura Bush from incoming first lady Michelle Obama. That box was also a symbol of what we appear to have gotten away from: good manners.

You bring a present when you’re invited to someone’s house. Show appreciation.

We all know about house-warming and hostess gifts. We’ve learned how important it is to be gracious and considerate of each other. But do we do it?

Last Tuesday NBC News Anchor Brian Williams commented on how President Obama would go out of his way to open his wife’s car door. Williams then added that we, meaning men, are all in trouble.

I would proffer that we, meaning all of us, already are.

Get off the phone. Close the laptop. Pay attention … to the little things.

Let’s treat ourselves and each other well. Last Tuesday was a bright and shining example of both.

Beyond race: What Michelle Obama means to me