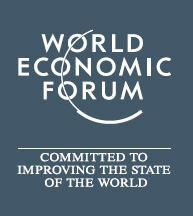 Excerpts from some of the better accounts of the annual World Economic Forum in Davos, Switzerland, that’s happening this week:

“A deep recession for 2009 is already baked into the cake,” says Kenneth Rogoff, a Harvard University economics professor and Davos speaker who calls the fiscal-stimulus packages a necessary but temporary boost. “We’ve had an asset bubble burst that’s not going to turn around no matter how much governments spend,” he says.

The greater risk is that the global contraction lasts several years — a scenario that could materialize if governments don’t complement fiscal stimulus with equally ambitious plans to clear banks’ books of bad assets and get credit flowing through the system.

Only about a third were very confident about growth in the next three years, down from 42 percent last year. Almost seven in 10 said their companies will be affected by the credit crisis, and 70 percent of those said they will delay planned investments as a result.

Just 13 percent of U.S. executives said they were “very confident” about revenue growth in the next 12 months, compared with 36 percent last year, while 15 percent in Western Europe expressed the same sentiment, down from 44 percent.

“I don’t think anybody’s going to come through this with even a moderate reputation intact,” said Charles Geisst, a finance professor at Manhattan College in New York and author of “Wall Street: A History.” “Everyone’s going down with the boat. No one seems to have seen this coming.”

U.S. Treasury Secretary Timothy Geithner’s call for China to loosen restrictions on its currency was criticized by economists and policy makers at the World Economic Forum.

Renewed clashes over the yuan threaten to stoke tension between two of the world’s biggest economies and undermine cooperation to counter the global recession.

For wonks: “The Future of the Global Financial System: A Near-Term Outlook and Long-Term Scenarios,” World Economic Forum report (PDF)