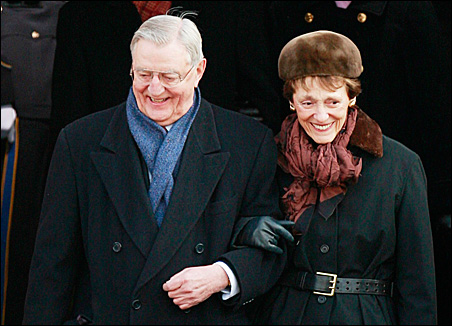 The new president had just been inaugurated, and now all the VIPs were gathering inside the Capitol to get warm and have lunch.

Former Vice President Walter Mondale and his wife, Joan, were seated at a table with the ancient one, West Virginia Sen. Robert Byrd, and with Ted Kennedy.

Like everyone else in the room, they all were trying to put into words what they’d just witnessed. Sitting up there on the platform behind the lectern where President Barack Obama had delivered his address, they all had had incredible views.

“Joan, just look at this,” Mondale had said to his wife as he looked at the sea of people.

Still moved by events two days later
Two days later, there was still a tightness in Mondale’s throat as he tried to describe the scene.

“It was stunning,” he said. “You see this vista all the way down the mall. It was packed as far as you could see. I’ve been around that town since 1960, and I’ve never seen anything like that. It wasn’t just the crowd. It was everything about the crowd. It was multi-ethnic. Multi-colors. All different ages. And there was this buoyant spirit.”

During the ceremony, the Mondales had been seated with other former vice presidents and their spouses. The Gores and the Quayles.

“The first George Bush was there, too,” said Mondale, laughing,  “but he got to sit with the former presidents.”

Anyhow, the Mondales and Byrd and Kennedy all talked about the crowd for a while and then started “sharing old war stories.”

Kennedy was at his best. 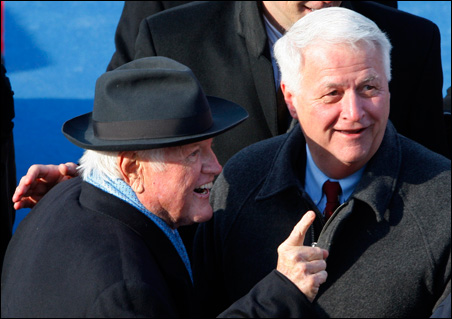 Everybody was laughing as Kennedy told the story, including Byrd, who kept saying, “Hallelujah!”

And then, suddenly, Kennedy became very quiet. Something was wrong. People, including the new president, rushed to the table. Kennedy quickly was taken out.

Lunch continued. But the laughter was gone.

“So relieved to hear that he’s doing OK,” said Mondale in a conversation Thursday morning. “So relieved.”

Before leaving for Washington on Monday, Mondale and Joe Biden had shared several long conversations about the role of vice president.  Mondale, of course, could speak from experience about his time as vice president to President Jimmy Carter from 1977 to 1981. Historians often note that Mondale remade the job from its largely ceremonial duties to become a close adviser to the president.

Mondale won’t get into the specifics of what he and Biden talked about.

What he told the new VP
“I told him he can be a general adviser,” said Mondale. “I told him, ‘You’re the only other elected official around the president. You’re not speaking on behalf of some department. You go where the action is. You go to the Hill, you go to Pakistan, you’re the president’s trouble-shooter. You can soothe egos in the Cabinet and on the Hill. You can save the president a lot of time and trouble.’ ”

Mondale said he’s hopeful that Biden and Obama will have the relationship of respect and trust that he and Carter had.

During the inauguration festivities, the Mondales and Carters spent time together, laughing and sharing a few memories.

Mondale had a couple of shorter conversations with Biden during his stay in Washington, but his conversation with Obama was brief.

“At the luncheon he stopped by,” said Mondale. He just said,  ‘Hello. Nice Day, wasn’t it?’ He was workin’ the room.”

The Mondales skipped out on the Inaugural balls.

“No tux and gown for us,” Mondale said. “We celebrated in the typical Mondale way. We went out for dinner with some friends and then went back home and watched on TV.”

“I learned a few steps in Elmore,” said Mondale, referring to his boyhood home. “But I don’t think they do those anymore.”