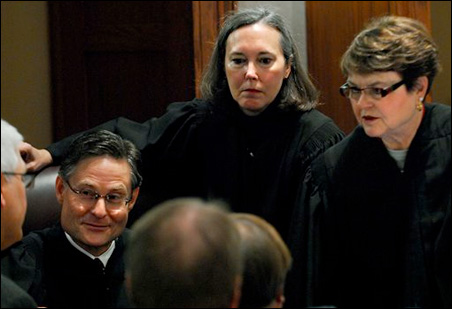 Sometime soon there will be a big bang.

It may come after the thwack of a gavel against an oak desk in Courtroom 300. It more likely could arrive in the silence of an email directing lawyers to a document in which the political fates of Al Franken and Norm Coleman will rest.

It will be an order of great power from three previously little-known judges who, for now, are the most important jurists in Minnesota.

The order will inform Minnesotans of the size of a mindboggling concept that could well determine the outcome of the 2008 U.S. Senate election.

The concept: “The Universe.”

The bang: How large a universe of uncounted votes will Judges Elizabeth Hayden, Kurt Marben and Denise Reilly allow to be counted to bring this election contest trial to conclusion?

‘Universe’ at center of attention
Other than the words “absentee ballots,” “your honor,” and “objection,” “universe” may have been the most uttered word by Norm Coleman’s and Al Franken’s lawyers during Week One of the Senate election contest trial.

After a week of testimony, a layperson can conclude a few things about where Coleman’s case stands – and remember he’s got to prove that the 225-vote margin Franken holds is not correct.

Coleman said it again today when he told reporters: “The number 225 is irrelevant … This race is not over.” He’s not giving up, that’s for sure.

But here’s what an average guy knows after Week One: Some votes weren’t counted that should have been; election officials in Minnesota did, generally, a fine job and, generally, followed the rules as laid down by state law or a Supreme Court decision in December; mistakes were made, but how many?

Coleman’s side – more than Franken’s – has shifted its position on the inclusion of absentee ballots,  but it always wanted the issue to be raised in this contest forum. The task of examining and, maybe, recounting all 11,000 absentee ballots that Coleman wants likely would take weeks, a time frame these judges don’t have.

So, how many votes are in play?

A handful? That’s what Coleman lawyers said was the universe of improperly rejected absentee ballots way back when in November?

The numbers game
Up to 1,600? That was a round number Secretary of State Mark Ritchie suggested was the group of absentee ballots that may have been wrongly rejected by election officials.

About 1,000 to 1,300? That was Franken lawyer Marc Elias’ initial prediction in mid-November.

Or 654? That’s how many Coleman’s side have said were in question when it filed its election contest motion on Jan. 6.

(If they took one minute to analyze each absentee envelope, it would take about 23 days of eight-hours of work. And one minute isn’t enough to analyze and count.)

That’s all of the absentee ballots that county officials may have wrongly rejected, the Coleman side says.

That the number is forever changing was made clear when Coleman lawyer James Langdon told the judges during a pre-trial hearing a week ago: “The universe isn’t done yet.”

This moving target is a notion that the Franken side disputes with much ferocity, in its legal documents and its public statements.

Franken lawyer Marc Elias, whose displays of disbelief at the Coleman side’s shifting are constant, told reporters the other day:

Wait a second. It’s time to consult with an expert. We called Shaul Hanany , a University of Minnesota professor of physics.

Professor Hanany specializes in … you guessed it, the universe.

And he wants to tell lawyers for both sides that, yes, the universe as a whole does, in fact, expand, “but nothing within our galaxy or solar system either expands or contracts.” So, the playing field “of the Minnesota recount is relatively stable because of the forces of gravity.”

We may be talking about 11,000 votes being in dispute for nearly three months now. But the real universe is 18 billion light years big and 13.7 billion years old. (Presumably, this trial won’t last that long.)

But here was Hanany’s major analysis of the recount, and he is nonpartisan: “The only meaningful issue is how large is the part of the universe we can see. Beyond what we can see, we don’t know.”

But, in his view, it seems as if the Coleman side wants “another experiment.” Because, to this point, it looks as if the universe we’ve seen of this election is what’s been determined already.

In the alternative, the professor recommended the lawyers for both sides go back to physics graduate school.

The Coleman side believes it’s made its case: the Coleman lawyers are trying to show in a few examples that there has been a general neglect of thousands of voters.

But the Franken side has shown – and county officials have backed them – that the mistakes are rare, not massive.

“At some point, we may have made our point,” said Coleman lawyer Joe Friedberg. “We may have made it now, but we can’t just look up at the judges and say, ‘How are we doin’?”

Yes, Friedberg said, both sides eagerly want a ruling from the judges.

“And they know we do and they know it’s a major, major issue in this case,” he said. “I think it’s a difficult issue for them.”

Indeed, these three judges, in their black robes, with their best wisdom, have to get their arms around the universe of ballots that should be re-examined.

If it’s 654 – the number the Coleman side once said was the universe – Coleman can’t win the recount. No way. One of his lawyers last month said of those 654 absentee ballots to be rechecked, perhaps fewer than 50 might be accepted.

Even if all 50 went to Coleman, that won’t undo his 225 deficit. Assume even that all 654 were actually counted. Coleman would have to win that group 440-214, assuming all the votes went to either Coleman or Franken and not to third party candidate Dean Barkley or others.

Will the judges narrow the universe by specific categories of rejection? Judge Marben has hinted in a couple of questions that he has an interest in signature verification.

Will they narrow the universe by picking one of the operative numbers out there? Judge Reilly today expertly asked a lawyer about “the 1,346”? That’s the number of rejected absentee ballots that came to the State Canvassing Board to count. Is she focused on that?

They are, clearly, cautious judges, but they know the narrowing of the universe is a political decision, too.

Today, when the legal work was over, the two sides met with the judges in chambers to work out scheduling for next week. Friedberg, the sly, friendly fellow with the everyman approach to questioning witnesses, walked out of the meeting first.

He walked past the assembled gaggle of reporters awaiting its daily nourishment of end-of-the-day quotes.

“We settled,” Friedberg said, as he wandered by. “Barkley’s going to the Senate.”

Now, that would truly expand the universe, wouldn’t it?

Coleman-Franken trial: After Week One, questions about ‘the universe’: How big is it, and when will the judges decide?