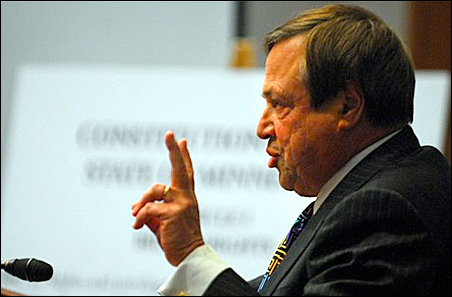 Elias, tall as an NBA forward, stood-then-sat, rose-then-sat, jumped-up-then-sat to object to Friedberg’s questions so often, he looked as if he were in an aerobics class.

In the end, the three-judge panel overseeing Minnesota’s extraordinary election contest sided with Elias, and the Coleman legal team was scrambling for witnesses, evidence and things to do for Tuesday’s Day Two.

Longer or shorter trial?
Whether the historic trial will go on longer than originally thought — or be cut shorter — because of today’s machinations remains to be seen.

A key ruling by judges Elizabeth Hayden, Kurt Marben and Denise Reilly this afternoon could extend the trial for weeks because new evidence will need to be gathered statewide.

Or it could signal that the judges are poised to limit the number of rejected absentee ballots to be examined … which would severely abbreviate Coleman’s case, which relies heavily on doing over the counting of absentee ballots.

It sure was a baffling blast-off for a day everyone knew was coming for the past month — and apparently confusing even for the judges, who seemed increasingly impatient as the day wore on.

They must have been wondering what they ever did to Supreme Court Justice Alan Page to get appointed by him to what already looks like a thankless job.

When the legal razzmatazz ended – at about 5:30 tonight – lawyers for both sides were still haggling over which witnesses will be called Tuesday and to what they will be able to testify.

The legal day began easily enough, and with a surprise lawyer seating at Coleman’s counsel table. It was none other than Sen. Norm Coleman, who would say later, he was there because, “This is important to me, it’s important to Minnesota, I devoted 32 years, almost my entire adult life, to service and I respect the system and the process … I wanted to be here … I put my heart and soul into public service … I’m thrilled to be here.

A Franken spokesman said Al Franken has no plans to attend the trial.

Friedberg in his opening statement, was, frankly, short on specifics and long on urging the judges to “do the best you can to level the playing field.”

He was relaxed, and it felt as if your Uncle Morty was chatting with some old friends up there in the robes. Friedberg showed that some counties rejected a higher percentage of absentee ballots than did other counties. He argued that such a discrepancy showed there had been “equal protection” violations, which brought up that marvelous case known as Bush v. Gore. 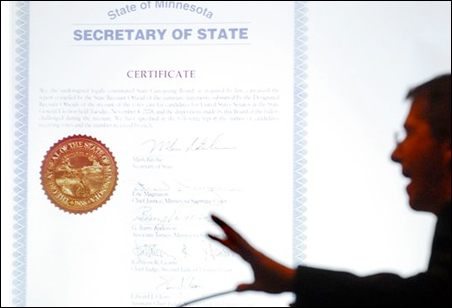 But, in the end, the core of Friedberg’s introductory argument was that he wanted to bring in about 5,000 or so rejected ballot envelopes and have the judges evaluate them.

He wanted them to help him solve Coleman’s problem and, in his view, the state’s problem: letting every vote count.

“If you do the best you can to do it in a reasonable way,” he said, “and if you are willing to open and count those … then we waive any complaint we have under equal protection.”

Focus on  absentee ballots
While Friedberg made mention of the potential for duplicate ballot counting and spoke briefly of the 133 missing votes in Minneapolis, it was abundantly clear that his case and Coleman’s fate rest with the outcome of how the previously rejected absentee ballots are going to be treated by Marben, Hayden and Reilly.

Soon after, Kevin Hamilton, a Seattle lawyer who helped in the 2005 recount trial for Washington Gov. Christine Gregoire, stood to make Franken’s opening argument. His style and approach couldn’t have been any more different from Friedberg’s.

In a steady and sweeping review of the arc of the case since Election Day, Hamilton systematically explained the Coleman side’s changing position on the counting of absentee ballots and the counting of alleged duplicate ballots.

But his major point was made visual with a blowup copy of the State Canvassing Board’s signed certificate earlier this month. It declared that Franken garnered 225 more votes than Coleman. Hamilton, staring authoritatively as the judges, said the three of them would have to engage in a “breathtaking exercise of judicial power” to overturn the Canvassing Board’s ruling.

For the judges – one from St. Cloud, one from Minneapolis, one from Thief River Falls — it must have been a burdensome and sobering statement.

And then the trial went tipsy.

Friedberg, it seemed innocently enough, called Kristen Fuzer to the stand as his first witness. It seemed all he wanted her to testify to was the validity of some massive three-ring binders that he wanted to introduce into evidence. In those binders were copies of previously rejected absentee ballots that Coleman’s side wants counted.

But Fuzer has been the political director of the Coleman campaign and has been involved in developing the copies of the ballots. Earlier, she was an observer at the recount and personally rejected some ballots.

Elias, who was annoyed that the Coleman side didn’t tell him that Fuzer would be a witness until about three hours before the trial started, was able to show that in December Fuzer signed an affidavit that, in fact, there were only 654 absentee ballots in question in this recount, not the 5,000 or more that Friedberg said were in doubt. (That 5,000 figure represents the most likely countable ballots of a pool of 12,000 that previously were  rejected.)

Besides, some of the ballots she helped to copy didn’t accurately reflect the copies sent to the campaigns by county auditors. The evidence was marked or redacted.

Amid a series of objections, Fuzer survived Elias’ cross-examination, and the relevance of some of his questions was questioned by Friedberg. The judges even upheld some of Friedberg’s objections. At the start.

But that was the beginning of a downward spiral for Friedberg. Because his next witness, Gloria Sonnen, stirred the pot a bit more.

Friedberg wanted her to begin to introduce into evidence a broad collection of questionably rejected absentee ballots. They began to recite the names of voters from Anoka County whose ballots had been rejected.

But Elias was able to show – and Sonnen admitted – that some of the copied ballots in the loose-leaf book had been altered by Coleman staffers; some with writing, some by being poorly photocopied, some by removing post-it notes from county election officials. It wasn’t all that clear why ballots were rejected.

It was all very confusing.

There weren’t allegations of shenanigans but just the appearance of tainted evidence.

Ultimately, after a recess, Hayden, Marben and Reilly ruled that none of the evidence on absentee ballots that Friedberg wanted to introduce would be accepted.

Indeed, any ballot envelopes he wants examined have to be the originals, which he’ll have to get from local election officials. (This is something Coleman’s side sought last week, but the judges denied. Franken’s side claimed it was a fishing expedition in search of votes.)

Exactly how much time getting the original ballot envelopes to St. Paul for this trial will take — and even if the judges will allow the introduction of 5,000 ballots — remains to be seen. In their election contest petition earlier this month, the Coleman side stated there were only 654 in doubt.

Afterward, Coleman spokesman Ben Ginsberg accused the Franken campaign of raising objections to stop votes from being counted. (Although, in November, at the start of the recount process, the Franken side said all absentee ballots should be counted.)

“By nature, looking at a lot of ballots, can be a confusing process,” Ginsberg said. “When you go ballot by ballot and the other side doesn’t want the votes counted, you can throw up procedural objections.”

Still, it was the judges who halted Coleman’s efforts today.

The legal symphony was so marvelous that, even after the post-game news conferences and after some of the journalists left the Minnesota Judicial Center, lawyers for both sides returned to the courtroom for a sort of legal coda.

There, in a contentious “in-chambers” session, the two sides and the three judges tried to figure out where this case is headed. With Coleman unable to introduce the bulk of his absentee ballot evidence until originals come from so many counties, the courtroom drama could be slim pickins’ the next few days.

But you never know.