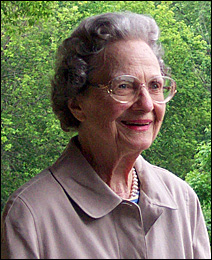 I first met Olivia Irvine Dodge eight years ago, when she was 82. She showed me around the Dodge Nature Center she’d founded in West St. Paul. We walked through the barn with her 6-year-old granddaughter, also named Olivia Dodge.

The little one said the cow was her favorite. Or maybe the horse.

The grandmother smiled; this was what she’d envisioned when she founded the center more than 40 years ago: introducing children to nature and animals.

Olivia Irvine Dodge died Saturday at age 90. The family will hold private burial services but promise a celebration of her life in the spring.

I wrote about her in my Star Tribune column in 2001. She’d grown up in the St. Paul home that is now the Minnesota Governor’s Residence. Her father, Horace Hills Irvine, was president of the Weyerhaeuser Timber Co. and built the Tudor home at 1006 Summit Ave. in 1911.

Olivia and her sister, Clotilde, donated the home to the state in the 1960s, after their mother died.

Hod Irvine, of St. Paul, said his Great-aunt Olivia was “as passionate and energetic as ever about her family and the nature center” in her later years. “The word spunky was created for her,” he said.

Over the years, she also developed one of the nation’s largest collections of memorabilia about Franklin D. Roosevelt. She started collecting material in 1945, shortly after his death, and in 1975 donated it all to the University of Minnesota, according to the U of M Libraries’ website.

Olivia and her late husband, Arthur Dodge, bought a home on 36 acres in West St. Paul in 1964. She bought up many small truck farms in the area as they went out of business and, by 1967, had more than 120 acres of rolling land on the quarter-section bounded by Wentworth, Delaware and Marie avenues and Charlton Street.

She wanted to preserve the land in an environmentally sound way, so she created the nature center; the West St. Paul School District immediately began field trips and projects. The bucolic center, which also runs a pre-school program, is only four miles south of downtown St. Paul.

“You can’t do something like this alone,” she told me in 2001. ” If you get an idea that does good for others and you really believe in, you draw to you the right people who can grab onto it and carry it forward. That’s what happened here.”

“She was our spiritual and intellectual leader, and, really, the mom of the nature center,” he said.

Eight years ago, Dodge talked with me about her legacy:

“People always tell me I must be so proud of the nature center, and I am, but I don’t think of it that way anymore. Each part of life is a chapter; it takes place, then you pause and move to the next part,” she said.

“Life goes by in such a flash, and you don’t appreciate that when you’re young. My daddy used to say: Why are you in such a hurry to grow up? Take your time and enjoy it.”

As she strolled the grounds with her granddaughter, Dodge said the nature center has grown even beyond her expectations.

“The world changes fast; we have to keep up,” she said. “Thank goodness that new generations have stepped in to run things, to keep them fresh and growing.”