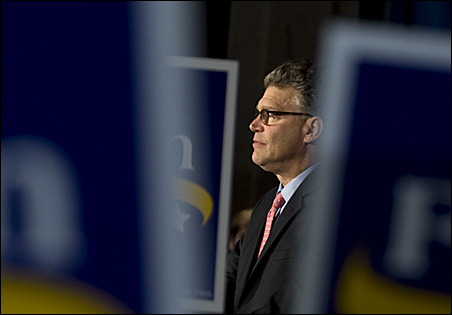 It was practically hypnotic.

Hear the word “Franken” 481 times and it will make you dizzy.

If you’re Norm Coleman and his advocates, it will definitely get your head spinning and your mood changing.

“Obviously … I’ve had better days, and so have we,” said Fritz Knaak, Coleman’s top lawyer, after today’s tabulation of formerly rejected absentee ballots.

At that time, he had said, “An election challenge is inevitable. There’s no doubt in my mind, that’s the case.”

Barely 24 hours later, he said, “If necessary … we are prepared to go forward to take whatever legal action necessary to remedy this artificial lead …”

Was he suggesting the end-game litigation by Coleman won’t happen?

“You always give yourself a little wiggle room,” Knaak said, still adding that, really, yes, they were going to take this to court.

Still, he added even more, “You always allow yourself a chance to reflect.”

Like a good soldier, he said, “We’re still expecting to come out on top.”

But exactly how remains the mystery of the weekend because today was a very bad day for Norm Coleman.

Al whips Norm in today’s count
That’s because Al Franken — to use a sports term, sorry — pummeled Coleman today, when the previously rejected absentee ballots were counted, 481-305, enough to lift his overall lead to 225 votes.

He’s no Jimmy Stewart, but with today’s count, “Mr. Franken Goes to Washington” may be the former comedy writer’s next sketch.

The 225-vote margin is what the State Canvassing Board will see come Monday. Barring an unforeseen interception by another Minnesota Supreme Court ruling, it appears as if Franken will have the most votes when the board meets.

“It was a very important and great day,” said Franken lawyer Marc Elias. “We are confident since there are no ballots left to count that the final margin will stand with Al Franken having won the election … It is not a large margin, but a comfortable margin … 225 votes is a real victory. One vote is a real victory, but 225 votes is a close election but it is a fairly clear victory.”

But back to the dizzying Saturday, which started at 9 a.m. and meandered all the way to 5:45 p.m.

For the final hour or so, it was as if Secretary of State Elections Director Gary Poser was some sort of guru, and his mantra was “Franken, Franken, Franken.”

That’s what the 40 or so spectators in Room 10 of the State Office Building witnessed as Poser counted what turned out to be 933 previously rejected absentee ballots that have been at the center of this recount.

It is a recount that in 48 hours, may be, could be, possibly, over.

The numbers could even make it difficult for Coleman to take the matter to court, an inevitability that many of us have been writing and chattering about for weeks.

But Secretary of State Mark Ritchie had a prediction today after the count ended.

“I don’t think there will be a contest,” Ritchie said. “I’ve said it from the beginning. This is so accurate and done so carefully that person with the least vote is going to say, ‘I’m disappointed, I’m sad, but I came in short this time.’ ”

It fit into the itsy-bitsy hedge mode that Knaak displayed.

The day
In the end, it took nearly eight hours for envelope opening and some legal wrangling to hear what Al Franken’s side suspected all along. That they’d be ahead.

But even Elias, who has been eerily correct on the numbers in this marathon, said he was surprised by how much Franken took the absentee ballot pile.

He also sought to link up the top “secrecy” envelope with the inner ballot envelope to keep track for future legal contests.

After an hour of consultation with the attorney general’s office, the handling of ballots began … but first envelopes were separated and matched and then ballots were removed from the envelopes. It was tedious, but it was done to protect the privacy of voters.

That took nearly six hours, with lunch in there somewhere.

Meanwhile, at 11:01 a.m., Sen. Norm Coleman went into hiatus. His term ended with the 110th Congress. There is no one in the Minnesota Senate seat … for now.

After more fastidious opening and examining of ballots by lawyers for both sides, at about 4:50, Poser began reading the ballots:

Franken was winning these absentee ballots as if his last name were Obama.

On the right side of the seating section in Room 10, the Coleman operatives grimly looked down at their legal pads and laptops. The results must have been disheartening.

The Franken group — some in the front rows, some in the back — silently tallied the spoils of the voters who chose to cast their ballots early or from distant locales.

What’s next?
What’s left is that potential legal challenge to it all from the Coleman side. Some Supreme Court rulings. Then a meeting Monday afternoon of the State Canvassing Board.

The basis of Coleman’s potential legal contest in the courts?

Lawyer Tony Trimble raises the issue of 600 or so absentee ballots that weren’t counted. He says the Franken campaign has stopped them. But Ritchie and others note that the Minnesota Supreme Court allowed each campaign to reject some ballots. Besides, the 600 or so votes Trimble is talking about weren’t approved by local election officials either.

Then there are the 133 missing ballots from the Minneapolis church polling place. And the alleged duplicate ballots.

The Coleman lawyers said there “could be” as many as 300 or 400 votes out there for their guy.

It’s not a measly 46. It’s three digits. It’s a mile for Coleman to catch up with only one big step for Franken to take Monday.

Which raises the question: Will Coleman challenge this now?

Saturday, Coleman’s lawyers declared — with a noticeable stepping back on the rhetoric — that it was a no-brainer that a legal contest was nigh. Knaak said the decision wouldn’t be his, but he’d recommend the challenge. He’ll have to be more enthusiastic when he does so with Sen. Coleman.

But if the former St. Paul mayor, gubernatorial candidate and (now seriously trailing) Sen. Coleman wants to run again in this state, does he really want to take this election to court?

Is it worth the time and money and possibility of looking like a sore loser?

It will be difficult to say the election was “stolen,” although some partisans will. Maybe even Coleman will.

But, as Ritchie said today, the difference between this recount and Florida’s Gore vs. Bush recount is “apples and oranges” … make that HoneyCrisps and oranges, sir.

Will this all end Monday? Or should Coleman’s campaign take the last, final, politically dangerous step?

It’s a question that must now be sadly floating in the conversations of Coleman advisers, supporters and the senator himself whose seat became vacant at 11 a.m. today and might — just might — be changing ownership soon.