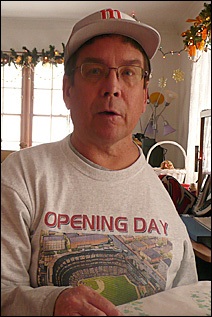 When baseball-loving Michael Samuelson protested the creation of the Metrodome in the late 1970s, he’d already undergone two kidney transplants to save his life.

His day job was as a 20-something left-wing community organizer. As one of the leaders of the adamant “Save the Met” group, he vowed never to watch a Twins game at the damned Dome.

When “Sammy” — a Twins diehard to the max — began testifying on behalf of a new outdoor Twins ballpark a few years back, he’d already received a third transplanted kidney.

To keep things interesting, the now 53-year-old housing code inspector was fighting off cancer, too.

When the Twins’ Target Field opens in 2010, Sammy plans on keeping his season ticket and being there … minus his amputated left arm.

Samuelson, Twins cap on head, dangling left long sleeve, will be there on St. Paul’s Harriet Island Saturday night, too, when a raucous crew of beer-swilling, cigar-puffing baseball aficionados gathers for the 26th time for Minnesota’s most down-to-earth Hot Stove League Banquet.

Baseball event could get emotional
Amid all the kibitzing, it could get seriously emotional.

To hear Julian Empson Loscalzo tell it, the affair — a major organizational headache but a terrific fundraiser for St. Paul’s Dunning Little League — is being staged because Samuelson forced it.

Last year, Loscalzo, a longtime state Capitol lobbyist, Twins fan and stadium-finance critic, had decided the era of the yearly banquet with a couple of hundred people and some local baseball celebrities was over.

Twenty-five banquets was enough. Too much work. Too little help.

Then, a few things happened.

Some folks believed their community needed one more banquet to honor Nelson.

Then Samuelson chimed in.

“Julian, gotta do another banquet, ” Samuelson said. “It might be my last one.” 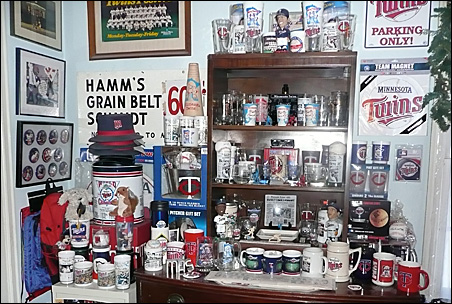 MinnPost photo by Jay Weiner
A spare bedroom at Michael Samuelson’s house is a shrine to all things related to the Minnesota Twins.

Softy Loscalzo caved. OK, he figured let’s do it. For Sammy. He figured it was yet another item on Sammy’s “bucket list”; you know, the list one compiles of things to do before kicking the bucket.

So Loscalzo corralled a few sponsors. The banquet was set for this Saturday. And then Loscalzo got to thinking.

“It dawned on me — the guy’s been dying since I met him,” Loscalzo said. “They’re probably going to put on a banquet five years from now, Sammy’s gonna be emceeing, and it’ll be my ashes in an urn on the table. You know, he’s a real pain in the butt.”

Pals just like Ralph and Ed, or Felix and Oscar
They’re like Ralph Cramden and Ed Norton, like Felix Unger and Oscar Madison, Russ Feingold and John McCain. They’re an odd couple that just can’t help loving and yelling at each other.

A major falling out came a few years back, when Samuelson testified at the Legislature in support of a new Twins ballpark. Loscalzo, who was always skeptical of public money for a stadium without some public ownership and who felt ticket prices were sure to soar in a new stadium, railed at Samuelson’s shilling for the team.

As usual, they got over it.

“This guy has struggled his entire life, and usually does it with a smile on his face,” Loscalzo said. “But if I asked the guy for his kidney, he’d probably give it to me.”

Let’s not go there.

Samuelson knows more about kidney transplants and their effects than a person deserves to know.

He told his story the other day at the dining room table of his St. Paul home wearing his silver Twins cap and his “Opening Day 2010” T-shirt, with a drawing of Target Field on it. Upstairs in a spare bedroom lives a shrine of Twinsiana: posters, photos, drinking glasses, banners.

As he sat there, his left sleeve had no arm in it. Samuelson had it amputated last September, the culmination, really of more than 45 years of health issues.

“I’ve been sick since I was a kid,” Samuelson said.

It started at age 7. He contracted a staph infection in his kidney.

Here came kidney transplant No. 1, the right one, when he was 11 years old in 1966. It came from his mother. That lasted eight years. Then he needed a second transplant. That was his left one. That came from his father.

“That was my second lease on life,” he said.

His dad’s kidney lasted for 30 years, a remarkable span for a donated kidney, a span in which he fought the construction of the Dome, went for a while to nursing school and became a community organizer in several Twin Cities neighborhoods, from Elliott Park to Powderhorn to Frogtown.

But five years ago, that 30-something kidney started to fail.

“So I had to do the old go-around and ask people for a kidney thing,” he said.

His siblings couldn’t or wouldn’t. But his sister-in-law Marcy Leland would. She’s the sister to Samuelson’s wife, Kiki Sonnen, the former St. Paul City Council member.

“Yeah,” said Samuelson. “What do I give her for Christmas now? And the joke is we have to move to Arkansas because now I’m related to my wife.”

The guy can laugh about it. But it was no laughing matter. This transplant was a bear. And the drugs he had to take to fight against rejection began to attack him and the kidney.

The side effects: the development of skin cancers.

First, last May, he had to have a finger amputated on his left hand.

A change of heart
He continued to go to Twins games, in great seats near the visiting dugout, where he and friends have gone to as many as 50 games a season for the past 20 years. The principled fan/citizen who once said he’d never walk inside the Dome now says he “loves” it.

“Sammy’s never been one for consistency,” Loscalzo, in a separate interview, barked.

But by last Sept. 9, as the cancer spread to the bone in his arm, after being told by a Mayo Clinic doctor, “You’re going to die,” Samuelson had his left arm amputated to his shoulder.

Community organizer that he is, he’d walk up to other amputees at doctors’ offices or at the Dome and ask them about their lives, their experiences. They were doing fine. They were alive.

It gave him strength. If he’s out and about and can’t open a bottle of soda, he’ll ask a stranger for some assistance. There’s no arm there, but it still gets cold and there’s no way to warm it.

Said Loscalzo: “This is pretty tough stuff.  I mean, all the suffering he’s gone through, and I mean suffering … I’m just cherishing my time with my friend … even though half the time we’re arguing with each other about something and calling each other jerks.”

Tickets are still available for the 2nd Annual Last Hot Stove Banquet and Charity Auction, which begins at 5:30 p.m. Saturday at Harriet Island Pavilion, St. Paul. They can be purchased for $30 at Anodyne Coffee in Minneapolis or Golden Thyme Coffee in St. Paul or by email at ballparktours@qwestoffice.net. It’s for the benefit of St. Paul’s Dunning Midway Little League.

Hot Stove Banquet: An affair to celebrate baseball and, this year, to root for ‘Sammy’