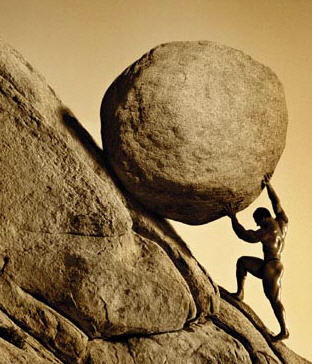 William Greider on the stones in President Obama’s passway:

Three large obstacles are blocking Obama’s path. The first is one of scale: his nearly $800 billion recovery package sounds huge, but it is perhaps two or three times too small to produce a turnaround. The second is that the financial system–still dysfunctional despite the bailouts–requires much more than fiscal stimulus and bailout: the government must nationalize and supervise the banks to ensure that they carry out the lending and investing needed for recovery. This means liquidating some famous nameplates–led by Citigroup–that are spiraling toward insolvency. The third is that the crisis is global: the US economy cannot return to normal unless the unbalanced world trading system is simultaneously reformed. Globalization has vastly undermined US productive strength, as trade deficits have led the nation into deepening debtor dependence.

Since Greider wrote that, we have learned that the going figure on the stimulus package is $825 billion, and that the president appears to have no interest in a temporary nationalization of the institutions in the biggest trouble; the official discussion about the solvency crisis still seems very much centered on pulling worthless assets off of banks’ balance sheets and into a “bad bank” underwritten by the American public. This is essentially a scheme for bailing out investors without any guarantee that it will solve a credit freeze-up that is driven as much or more by the financial system’s damaged credibility as its damaged liquidity.

As for the stimulus package itself, well, don’t expect miracles. Paul Krugman’s Sunday NYT column does a nice job of countering GOP talking points on the evolving legislation.

But let’s keep the scale and the policy thrust of “Obama’s New Deal” in perspective. At present one-third of it consists of tax cuts, and the proceeds from tax cuts will tend to be saved, especially in a climate like this. Their stimulative effect on spending, which after all is the point of the stimulus package, will be negligible. But tax cuts, in Team Obama’s view, are part of the price of blunting Republican dissent, and it’s entirely possible that they will make up an even larger portion of the overall package by the time it’s completed.

That leaves about $550 billion in direct spending measures over a period of 18-24 months, or roughly $275 billion a year. As a portion of the $13 trillion U.S. economy, it’s not much. For comparison’s sake, it’s less than half as much as American consumers pumped into the economy each year by borrowing against their home equity at the height of the housing bubble. That figure topped out at around $600 billion a year, which amounted to 6 or 7 percent of consumer spending at the time.

The administration’s estimates regarding the number of jobs the plan will create or save has ratcheted steadily upward, from 2.5 million to 3 million to 4 million. Even if we take the high-end number at face value, however, it’s likely to fall well short of the cumulative U.S. job losses in 2008-09, which numbered 2.6 million last year and are expected by many economists to look similarly grave in ’09.

But New Deal programs did a lot to ameliorate the situation on the ground for millions of working Americans. The greatest disappointment of the Obama plan, economically as well as socially, is that the overview released by the White House contains nothing for the Americans at ground zero in this crisis: the millions who have already lost their homes, and the millions more who are now under water on their mortgages–owing more than their homes’ current market value–and facing the prospect of losing their jobs or seeing their Alt-A loans reset.

For what it’s worth, the president’s main economic adviser, Larry Summers, is pledging that there will be $50 to $100 billion worth of “foreclosure mitigation” money in Obama’s plan for using the second half of the $700 billion in TARP funds approved by Congress last fall. That’s a woefully inadequate sum, but better than nothing. Let’s see if it actually happens.