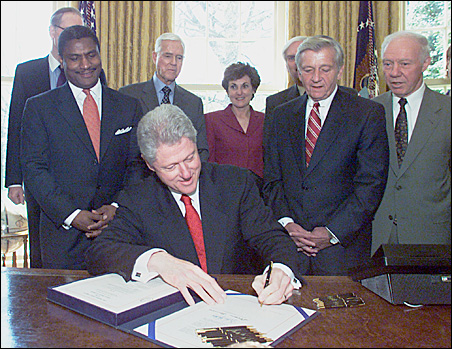 In his more than four decades on Capitol Hill, no one has accused Jim Oberstar of cutting a dashing figure on the Washington stage. At 74, he still carries the rugged look and gait of his Iron Range boyhood. Only when he begins to speak in melodic tones — his storehouse of knowledge spilling out in encyclopedic detail, his command of numbers assuming a cadence almost of poetry — do you get the sense that here is an influential man.

Indeed, no one may influence the lifestyles of early- to mid-21st-century America more than Oberstar.

As chairman of the powerful House Committee on Transportation and Infrastructure, he will write the public-works portion of the stimulus/recovery package that Congress expects to pass in the first weeks of Barack Obama’s presidency. Later this year he will write a reauthorization of the basic federal transportation law due to expire in September. Both efforts could leave a major imprint on how the nation pulls itself out of its economic tailspin and rebuilds itself at a critical moment in history.

The opportunity for a legacy
Global forces are dictating changes in the way Americans live and move around. A warming climate, unstable energy prices and excessive dependence on foreign oil supplies figure to move U.S. policy in a new direction, one that encourages less driving and more compact community design with alternative modes of travel. Add to that the urgent need to repair the nation’s crumbling infrastructure — including roads, bridges, urban rail systems, harbors and waterways — and you begin to see both the enormity of Oberstar’s task and the opportunity for an Oberstar legacy.

After 34 years in Congress, and 12 years before that as a congressional aide, the Minnesota Democrat is at the pinnacle of his career. 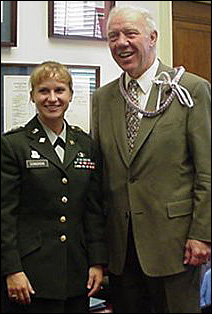 “I try not to think of this as a high point for me, I try to think of this as public service,” he said last month while dashing from one meeting to the next. Sorting out the nation’s transportation needs is considerably more complex now, he said, than in the in the 1960s and early ’70s, when he worked for his 8th District predecessor, Rep. John Blatnik. Blatnik also rose to chair the same House committee, then called Public Works.

But nowadays there’s little time for reflection on the path his career has taken. Everyone wants Oberstar’s ear: road contractors, shipping companies, airlines, state officials, environmentalists, unions, manufacturers, traffic engineers, realtors and urban designers all have ideas for how best to spend the public’s money.

Asked to summarize what he hopes to accomplish in the new transportation law, Oberstar said, “It comes down to one word: livability.”

The current economic meltdown makes progress on infrastructure investments more compelling. “We have to put people back to work,” he said, “and we have to get our economy in shape to compete.”

Norman Ornstein, resident scholar at the American Enterprise Institute and one of the nation’s top experts on Congress, has known Oberstar for decades. “He just kind of snuck up on us as a powerful figure,” Ornstein said.

“His style is very Minnesota; to look at him and chat with him you wouldn’t think he’s a powerhouse. But spend a little time with him and you realize that he’s a really nice guy and a very smart guy. He speaks French fluently. He knows the issue of transportation upside down. And he really cares. The issue has kind of come to him. It used to be that transportation was just pork. Now it’s clear that it’s vital to the economy and it affects our daily lives in big ways, and that Oberstar is at the center of something important that will affect our lives for a very long time.”

More impact as committee chairman
Ornstein said it’s probable that Obama considered Oberstar for his Cabinet. But the transportation post went to Republican Ray LaHood, a former member of Oberstar’s committee. “Oberstar would probably have turned it down; he’ll have more impact where he is,” Ornstein said.

Oberstar views his big enterprise as two phases: The first part is the stimulus package aimed at expediting projects ready for construction in a matter of weeks. He cautions that the list must be limited to those that will produce jobs very quickly. The list also must be free from any hint of political favoritism. Obama has insisted that pet projects (earmarks) will be forbidden. Phase two is the bigger, broader transportation rewrite that could transform U.S. policy.

Oberstar opened a window into his thinking last month when, as part of $85 billion in transportation spending being considered for the stimulus plan, he suggested a 60-40 split in funding for roads and transit; $30 billion for highways and bridges and $12 billion for buses and trains. That ratio would push transit’s share of federal gas-tax revenues considerably upward. For years, the split has favored cars and trucks, with roads getting more than 80 percent.

His approach would mark major shift
If Congress and the new president agree, the new ratio would reflect a major shift in federal policy. Transportation would be more clearly defined as moving people, not just cars. Concern for climate change, the environment, foreign oil dependence and traffic congestion would be reflected in funding formulas.

Oberstar has also tipped his hand on other matters. “We need to think bigger and more inclusively than in the past,” he said. 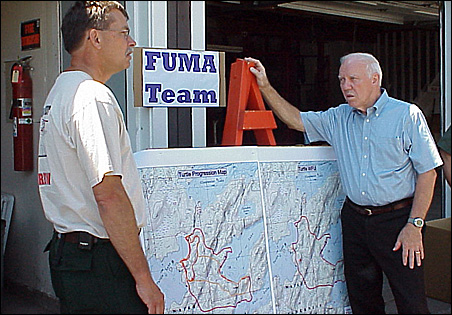 oberstar.house.gov
Oberstar at a U.S. Forest Service briefing in Ely regarding fires in the BWCA.

For example, he wants to relieve highway congestion in coastal areas by offering shippers better opportunities to move freight over water, even for relatively short distances. Likewise, he favors the building of high-speed rail corridors to lure drivers out of their cars for midrange trips — such as from the Twin Cities to Chicago. He wonders if electric utilities couldn’t be coaxed into running streetcar systems, as many once did. He ponders ways to charge vehicles for highway use by weight and distance as a way to augment faltering gasoline-tax revenues. And he favors flexible travel arrangements by which a traveler in small-town Minnesota could buy a single ticket that would take her seamlessly by bus to a regional airport and then by air connections to anywhere in the world.

The broader benefits of travel
It was travel, after all, that expanded Oberstar‘s own horizons. He grew up in Chisholm, the son of Slovenian immigrants. His father, a miner, saved $2,500 in quarters to send young James off to the College of St. Thomas in St. Paul. He graduated with honors in French and political science in 1956 and promptly set off for grad school in Belgium. He earned a master’s degree in European studies at the College of Europe in Bruges in 1957. After further studies in Quebec and at Georgetown University, he taught English and French in Haiti before landing a job as Blatnik’s chief of staff in 1963.

Oberstar won election to Congress in 1974 and, despite failing to get his party’s Senate nomination in 1984, has never lost an election. His politics, says the National Journal, reflect a liberal Catholic outlook: conservative on issues like abortion and gun control but liberal on socio-economic matters. Oberstar believes in an active government and is skeptical that the market can provide a fair enough distribution to move people forward. 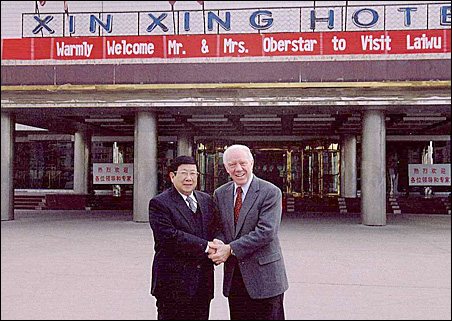 During his long legislative career, he has made himself an expert on the airline industry. He has championed domestic steel and adoption as favorite issues. Another emphasis has been physical fitness as a way to reduce obesity in children. Oberstar is himself an active cyclist (both in Minnesota and near his home in Potomac, Md.), and has influenced federal policies that include biking and walking as a transportation choice. His “safe routes to school” program encourages communities to build bike paths and sidewalks as healthy options for kids.

An old-school politician
While scholarly in manner, Oberstar is an old-school politician. He doesn’t apologize for using his status to deliver generously for his district and state. For him, earmark is not a dirty word. Within days of the 35W bridge collapse in Minneapolis, Oberstar had secured $250 million in federal money for a replacement.

“It’s the biggest earmark Minnesota ever got, and nobody complained,” said former Rep. Martin Sabo, a Democrat who served alongside Oberstar for 28 years. Asked to assess Oberstar’s success, Sabo credited his dogged persistence and his talent for working with Republican colleagues.

Ornstein agreed. “I don’t know anybody who doesn’t like him,” he said.

Not always patient
Oberstar is not always a patient man. He has sharply criticized Gov. Tim Pawlenty for failing to raise state funds to meet federal matches for transit and other infrastructure projects. “If these people had their way, we’d still be traveling by horse and buggy,” he once quipped.

On a weekday last month, the congressman ducked into a meeting with real-estate developers, local officials and others in downtown Minneapolis.

“We have an enormous challenge ahead of us,” he began. “But, in a terrible economy, people now see the benefit of updating our infrastructure,” he said, not only to add jobs but to sharpen our competitive edge. He said that states have already identified about 4,000 highway projects.

Over the longer term, however, public heath and land use must have more influence over transportation policy, he told the gathering. Cities like Dallas and Phoenix have been able to generate hundreds of millions of dollars of real-estate investment along their light-rail lines, for example, offering people a chance at healthier lives.

“We need a new direction,” he said. Then, quite suddenly, he was off to his next meeting.

Oberstar at the pinnacle: Minnesota congressman expects to put his imprint on the recovery — and on America’s livability