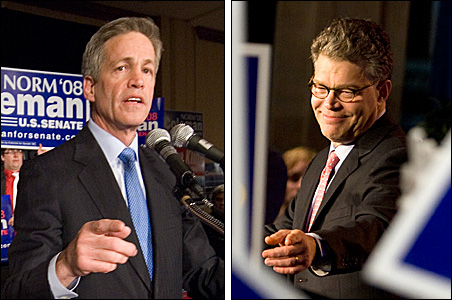 In an effort to feed the habit of Recount Geeks — who must now become Election Contest Groupies in the Al Franken-Norm Coleman matchup — we’re emptying our notebooks and offering you some notes and quotes, dribs and drabs, dots and dashes …

And let’s say it goes all the way to the seven-member Minnesota Supreme Court.

Which side can we expect the five remaining justices to be on?

Early in the recount, some Franken boosters rubbed their hands with joy when Chief Justice Eric Magnuson and Associate Justice G. Barry Anderson joined the State Canvassing Board.

The view from Franken’s corner was that by removing conservatives Magnuson and Anderson from the Supreme Court roster, the remaining five justices included three “liberals” — Alan Page, Helen Meyer and Paul Anderson.

With only two “conservatives” remaining — Lorie Gildea and Christopher Dietzen — Franken would have a 3-2 edge.

Not true, says William Mitchell College of Law Prof. Peter Knapp, who is the state’s leading authority on the Minnesota Supreme Court. Knapp is such a geek that he keeps Supreme Court stats the way some wackos keep track of Nick Punto’s on-base percentage.

In Knapp’s analysis, it is true that since Dietzen joined the court last year, he and Gildea have “been quite consistent.” Indeed, the two of them have agreed in every case in which there’s been a dissent over the past year.

But, Knapp said, “As a practical matter, there really has not been a consistent block of voting on civil matters with respect to the other three justices. They just don’t line up consistently.”

For those of you scoring at home, in 2008, out of about 100 cases, there were only 19 with dissenting opinions. (The Supreme Court is very agreeable.) But in those cases in which there were dissenting views, Gildea and Dietzen were never on opposing sides of a case.

But, in those same 19 split decisions, Paul Anderson and Page were on different sides nearly 80 percent of the time, said Knapp.

“In civil matters, in this court, it just doesn’t line up left or right,” Knapp said, “in part because the questions they’re answering tend to be fairly technical.”

So, Frankenphiles, don’t be thinking a Franken appeal to the State Supreme Court is a slam dunk. — Jay Weiner

Partisanship watch continues to whiff
The state law on election contests empowers the chief justice to appoint a three-judge panel to hear such cases. No law required Minnesota’s Chief Justice Eric Magnuson to recuse himself from that task in the Coleman contest, as he did on Tuesday. But it was reasonable for him to do so, since he had been a member of the Canvassing Board, and the board’s rulings will be second-guessed during the contest.

It was only the latest in several examples of players in the recount taking steps to avoid an appearance of partisanship, the biggest of which may have been Secretary of State Mark Ritchie’s acceptance of two presumably Republican justices for the Canvassing Board. Magnuson nominated himself (and Republican appointee G. Barry Anderson) for that assignment but the law gives Ritchie power over those appointments.

Not only is Magnuson a recent Republican appointee to the court, but his recusal put Alan Page as the senior member of the court (first elected 1992), in charge of appointing the panel. I’m not sure what Page may have done earlier in his career (other than being black) to leave the world with the impression that he is a DFLer. Page doesn’t wear the partisanship of an original appointer because he was elected to a rare open seat on the court. I do know that he has been rumored as a possible DFL candidate for several major statewide offices and is believed to have DFL leanings. (Can’t blame him for rumors, but he was never rumored to be mulling a bid for office as a Republican.)

If the assumption is correct, it adds to the importance of Magnuson’s recusal, since it amounts to a transfer of that appointment power over the three-judge panel from a Republican to a Democrat. So far, the ability of judges and election officials to avoid blatant partisanship in the recount has been impressive. Certainly Page’s appointees will be closely scrutinized along those lines.

Professor and election law expert Edward Foley of Ohio State University has been writing about how well this step was handled in the famous recount of Minnesota’s 1962 Andersen-Rolvaag gubernatorial election, when the then-chief justice got the two contestants to agree in advance to the lineup of judges. That basically made it impossible for either side to argue that the panel had been stacked against them. A full-fledged MinnPost guest piece by Foley on how that was accomplished, and how it contributed to the final outcome, is here. — Eric Black

Norm and the national GOP
When Norm Coleman made his decision to contest the recount, what kind of national or local pressure did he get from the GOP faithful?

Did Coleman get pushed by the leaders in D.C. or the boosters locally to pursue the legal battle?

Wondering, we asked that of state GOP Chairman Ron Carey. He responded via a brief statement through a party spokeswoman, but we’ll take whatever we can get.

“This decision was Senator Coleman’s to make and we supported him fully in his decision.” Carey said, suggesting there wasn’t any pressure.

But another GOP party insider had this take: Once the Coleman/Franken seat was no longer the possible 60th Democratic seat in the Senate, the national GOP pols didn’t exert as much influence or express as much concern.

Meanwhile, this insider said, Coleman and his backers took at face value the Canvassing Board and Supreme Court’s rulings that his complaints would get a better airing in the election contest phase.

But, clearly, Coleman wasn’t alone in deciding, not with about 150 chanting supporters at his announcement Tuesday. — Jay Weiner

Reid’s ‘friendly’ advice to Coleman
In his opening remarks on opening day of a new session, the Senate majority leader traditionally discusses any problems with the elections of members waiting to be sworn in. Democratic Leader Harry Reid followed that tradition Tuesday, discussing why neither Roland Burris of Illinois nor Al Franken would be seated that day.

Reid had hoped that Al Franken would be seated, provisionally, while awaiting court action in the recount. But Senate Republicans would not agree to seat Franken without a final certificate of election. So Reid announced in his opening remarks that “Democrats will not seek to seat Senator-elect Franken today.”

By referring to Norm Coleman as “former senator” and to Franken as “senator-elect,” Reid gave no credence to the idea that Coleman might win his court case. While acknowledging that Coleman is “entitled to the opportunity to proceed however he feels appropriate,” Reid stated flatly that “the people of Minnesota — they’ve chosen a new senator, Al Franken.”

It’s not clear how Reid plans to make that stick, if the court battle goes on for months.

Reid spent several minutes counseling Coleman to concede, reminding Coleman that he himself had once lost a Senate election by just 524 votes (this was in 1974, when Reid made his first Senate bid and lost to Republican Paul Laxalt) and that he had accepted the result of the recount without going to court. He added that he had also won an election by just 428 votes (this was 1998, when Reid barely survived a challenge from Republican John Ensign and Ensign had called on him to concede before the recount was finally done.)

Reid was speaking a few hours before Coleman announced that he would contest the recount. I can’t believe Reid’s appeal made much difference to Coleman, who had already made up his mind to go to court, but here’s what Reid said:

“I say to my friend Norm Coleman: Watch what I’ve said, and watch what has taken place in the past. The Senate race in Minnesota was very close — very, very close — one of the closest in history.  A bipartisan state Canvassing Board and Minnesota’s election officials have done an exemplary job of handling the recount. [Note that reference to the bipartisan make up of the board.] No allegations of partisanship or unfairness on either side, that I am aware of, and I’ve followed it every day for six weeks. [There certainly have been allegations of partisanship, mostly directed a Democrat Mark Ritchie, the secretary of state.]

“Even close elections though, have winners. I can testify to that. After all votes have been fairly counted Al Franken is certified the winner by the state Canvassing Board and he’s the Senator-elect from Minnesota. Democrats will not seek to seat Sen.-elect Franken today. We understand the sensitivity on both sides to an election this close.

“This is a difficult time for former Senator Coleman and his family. And I acknowledge that.

“He’s entitled to the opportunity to proceed however he feels appropriate, but for someone who has been in the trenches in a number of elections, graciously conceding like his friend John Ensign did, would be the right step.

“This can’t drag on forever, I understand that. I hope that former Senator Coleman and all of our Republican colleagues choose to respect the will of the people of Minnesota. They’ve chosen a new senator, Al Franken, and his term must begin and will begin soon…” — Eric Black

Football  fan Elias knows how to fill ‘timeouts’
Franken lawyer Marc Elias, who grew up in suburban New York City, is a rabid New York Giants fan who has retained his Giants’ season ticket even though he lives now in the Washington, D.C. area. Occasionally, during breaks in the tedious Canvassing Board hearings, Elias would seek out a sportswriter in the peanut gallery to chat about the Giants’ running game and the rising cost of Giants’ season tickets … — Jay Weiner

By Jay Weiner and Eric Black