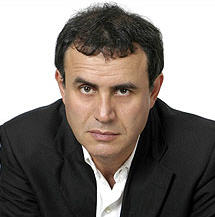 As promised last week, here’s a summary of the 2009 U.S. economic forecast (free registration required) from Nouriel Roubini, aka Dr. Doom, the man who back in 2006 predicted the mortgage morass and the credit crisis it engendered. These numbers reflect Roubini’s “benchmark” scenario, but bear in mind a couple of other factors: He told CNBC there was roughly a one in three chance that the United States will still wind up in a long-term deflationary stagnation akin to the Japanese meltdown of the ’90s or the U.S. experience in the 1930s; and he has followed this forecast with worrisome words about China, where a worse-than-expected downturn could increase the pain in America and in other developed countries.