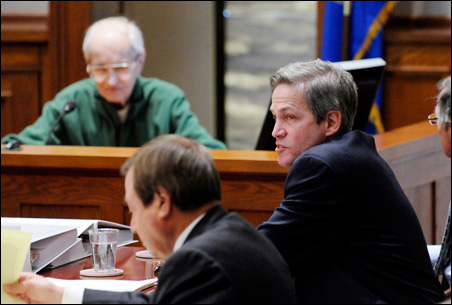 The thick, blue three-ring binders with the impersonal Excel spreadsheets and the thousands of copies of questionable ballots sat today on desktops and in bankers’ boxes.

The lawyers’ rhetorical and logical magic was, for a few minutes, set aside.

Judges Denise Reilly, Kurt Marben and Elizabeth Hayden stopped taking notes. They gazed over their glasses to the proceedings below them.

For an hour today in the room where the Minnesota Supreme Court usually convenes, a half-dozen relatively average people from St. Paul to Zimmerman, from Waite Park to Rosemount, took to the witness stand on the right side of the third-floor courtroom.

Under questioning from a Coleman lawyer – with all acknowledging they were invited to the trial by Republican Party operatives – these concerned voters wondered why their votes hadn’t been counted on Nov. 4.

One man, Gerald Anderson, 75, is blind, hard of hearing, and needed a wheelchair to enter the Minnesota Judicial Center. He said he had voted every year since casting his first vote for President Dwight Eisenhower more than a half-century ago.

Anderson of St. Paul testified that he voted by absentee ballot last November, but, he said, his vote wasn’t counted. Seems there was something wrong with the signature on the envelope of his absentee ballot.

“I couldn’t believe that it could happen to me in America, that they could take my vote away from me,” he emotionally told Coleman lawyer James Langdon, the three-judge panel and a half-filled courtroom gallery. “As far as I know, they still haven’t given it back to me, have they? …I want it back. I’m entitled to my vote.” 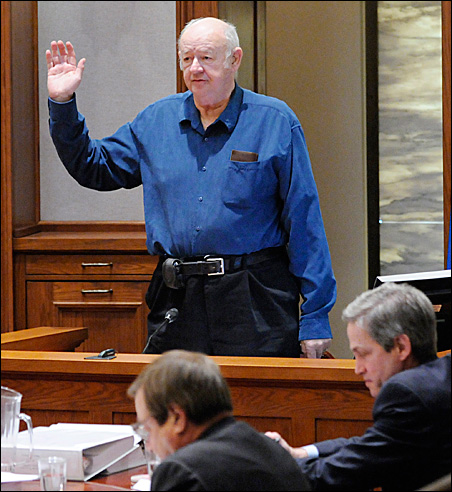 Six witnesses, six stories
Anderson was the first of six witnesses called by the Coleman campaign. It was difficult to tell from the exchanges with Langdon exactly why their absentee ballots had been rejected, but many centered on the inexactness of their signatures.

Eugene Markman of Waite Park said he thought his ballot was rejected because “the ‘n’ on the end of my name has one lump, not two lumps.’’

But no one knows for sure.

When asked to read the note on the envelope that explained its rejection, Markman found that judge’s note difficult to read.

“Whoever wrote this didn’t know how to write either,” said Markman, and there was a moment of laughter amid the messy work of democracy.

And so it went with four others. They voted by absentee ballot. Their votes were rejected. But, it seems, that other voters in other counties who might have made similar errors on their absentee ballot envelopes had their votes included.

(One witness admitted his girlfriend signed the absentee ballot application – not him – and that weakened his grievance.)

Still, the Coleman campaign was trying to prove – not through still pieces of paper in silent looseleaf binders, but through breathing human beings – to the three judges that there have been inconsistencies in the way votes were counted in Minnesota.

“Today, we saw the human side of this,” Sen. Norm Coleman, who watched from his lawyers’ table for the second straight day. “We had Minnesotans come forward who didn’t have their votes counted, and they were pretty emphatic they want them counted  … For me, it was heartwarming.”

Ben Ginsberg, Coleman’s legal spokesman, added, “Under Minnesota law, it is the power, the duty and the obligation of the three-judge court to be sure that there are consistencies in the way that similar ballots are handled.”

Ginsberg said the citizens who took the stand illustrated how different votes were counted differently in different precincts.

Now for the other view …
But as compelling as most of the six voters’ stories were, there are other people whose stories will be told in this trial, too.

They are the election officials who decided to reject the ballots of voters, including some of these six. They are officials who tried their best to follow the law and the limited categories within state law that approves or rejects absentee ballots.

Their stories will get their day in court sometime soon, too.

We know that of the nearly 3 million ballots cast, there was a pool of 12,000 rejected absentee ballots.

We know that the Franken side has long said that out of that batch of 12,000, there are perhaps up to 1,600 wrongly rejected envelopes that should be counted; that is, the rest were probably rejected for good and lawful reasons.

We know that, after a ruling from the Minnesota Supreme Court in December, about 1,300 absentee ballots were closely  examined by both campaigns and that more than 900 were included in the final recount, the one that Franken won by 225 votes before the State Canvassing Board.

It is that margin that Coleman is contesting in this trial.

We also know that earlier this month, when the Coleman side filed its election contest petition, it said there were about 650 rejected absentee ballots that should be counted.

The Franken side said about another 770 previously rejected votes should be examined by the judges.

But more recently, much to the frustration of the Franken lawyers, the Coleman universe of absentee ballots to be considered has ballooned. First, a few days back, it returned to the 12,000 figure. Today, Ginsberg said the Coleman side has reduced its request – at least for now – to 4,549 absentee ballots that the three judges should examine and, perhaps, count.

But another witness, also called by the Coleman side, put the stories of the angry, disenfranchised voters into a different sort of perspective.

After the voters told their touching tales, James Gelbmann, a key deputy to Secretary of State Mark Ritchie, explained how parts of the recount were conducted.

In the course of that, he said he had “100 percent confidence” in county election professionals, hardworking men and women who made informed decisions on what ballots were rejected.

“Each one of these rejected absentee ballots has a story behind it,” Gelbmann said. “And you really would have to go out to the local election official” and get the details for why a ballot was rejected.

That, in fact, is the Franken campaign’s point of view.

How can it be, they wonder, that when all the county auditors and elections’ officials in the state did their duty and counted and recounted all the votes, they only came up with about 1,300 ballots that they thought might have been wrongly rejected?

But now the Coleman campaign wants as many 12,000 brought back into the count, all of which were presumably examined and set aside as rejects once, twice and maybe more.

Ginsberg says he wants the judges’ six eyes to see all 12,000 in-question ballots to ensure uniformity.

Of the Franken campaign’s reluctance to recount again, Ginsberg has asked, “What are they afraid of?”

Pool of contested votes in flux
But Franken lawyer Marc Elias counters that the Coleman side’s ever-changing pot of ballots to be counted is like trying “to chase this rabbit around the hole.”

Elias’ colleague, Kevin Hamilton, told the three judges as today’s court session ended, that four of the six witnesses who testified for Coleman today weren’t even among the initial list of 654 that Coleman’s side previously said needed re-examination.

That is, the Coleman stable of aggrieved voters is still in flux.

Hamilton called Coleman’s revolving list of aggrieved voters and its size “a constant game of shuffling the deck … there’s something wrong going on here.”

Elias said Coleman’s lawyers “want to make this about generalizations,” but it is the specificity of the reasons for rejected ballots that’s at play in the trial. And it is the election judges statewide who are “the best judges of why a ballot was rejected or why a ballot was accepted,” he said.

To be sure, there are thousands of stories in RecountLand. Some belong to voters who were wronged. Others belong to election judges who looked, looked again and rejected ballots the best they knew how.

Today we learned that it will be up to Judges Reilly, Marben and Hayden to determine which of those stories will matter the most.