RED LAKE, Minn. — Cuts, retrenchment, caution — those may be the guiding words across most of Minnesota these days as the economy shudders. But the Red Lake Band of Ojibwe Indians is betting on expansion.

Betting is the key word. 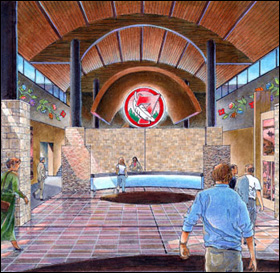 With a $31 million loan from the Shakopee Mdewakanton Sioux Community, Red Lake has broken ground on a new Seven Clans Casino at the southern edge of the reservation, hoping to draw more gamblers from nearby Bemidji and the surrounding region.

The new casino will be just seven miles closer to Bemidji and U.S. Hwy. 2, but positioned at the border it may seem less intrusive to visitors as well as residents of the often insular reservation. It will replace a small, makeshift gambling hall, a former community center at the heart of Red Lake.

The casino project, scheduled to be completed by the end of this year, also will provide the isolated reservation with a hotel and upscale restaurant, among other amenities long lacking here.

Band operates two other casinos
Red Lake operates Seven Clans casinos in Thief River Falls and Warroad, Minn., and recently paid off loans that had financed expansions and upgrades there. The three operations reported a combined net income of nearly $6 million in 2007 while employing nearly 900 people.

“We have three small operations, but we seem to be doing all right,” Red Lake Tribal Chairman Floyd (Buck) Jourdain said. “We haven’t been so affected by what’s happening with the economy.”

A little more than two-thirds of the $31 million loan will go toward the new casino complex, to be built according to a traditional Ojibwe “long house” design. It will include the all-suites hotel, restaurant and banquet hall, as well as an entertainment center and gift shop. A later development could wrap a golf course and powwow grounds around the complex.

Jourdain said the project won acceptance from the 6,000-member band “because it’s not all centered on gaming.”

The hotel, restaurant and meeting areas will nurture other businesses on the reservation, he said, and the project as a whole “will create more employment and allow us finally to do a lot of infrastructure work that we’ve needed, including new roads and a new water system.”

Will pay off other debts
About $9.2 million of the loan will allow Red Lake to pay off debt on other recent projects, including a law-enforcement center and a new greenhouse, and to return the existing casino to its original purpose as a family-friendly community center.

The project’s primary aim is to boost visitor traffic and gaming revenue, but “this is going to be for us, too,” Jourdain said. “Right now, you can’t buy a steak anywhere on the reservation.” The restaurant, hotel, meeting rooms and other areas will be accessible to Red Lake members “without ever setting foot inside a gambling hall,” he said.

Like the restaurant, the 40-suite hotel will fill a void on the 1,259-square-mile reservation, while the new greenhouse continues a traditional Red Lake activity. The band has operated one of the largest tribal greenhouses in the United States for 60 years, growing red and white pine, white spruce and other varieties for reforestation, part of the tribe’s long-running timber industry.

This isn’t the first time the Shakopee Mdewakanton Sioux, operators of Mystic Lake Casino in Prior Lake, have extended a hand to the Ojibwe of Red Lake. Over the past decade, the southern Minnesota tribe has given more than $130 million to charitable organizations and other American Indian tribes, including recent grants of $1 million for a Boys and Girls Club at Red Lake and $1 million toward revival of the band’s fishing industry.

The $31 million loan for the new casino and other projects was offered under terms “a little more lenient” than would be available from other lending sources, Jourdain said.

“They’re going to make money on the deal,” he said. “It’s business. But no one else is going to do” what was offered by the Shakopee Sioux.

Remote location, less spectacular success
Steven Light, a nationally recognized expert on Indian gaming who has testified before Congress, said that the metro-neighboring Shakopee tribe “is at the high end of what we call the ‘spectrum of success’ in Indian gaming,” while the more remote Red Lake band has been “closer to the other end.”

Light, 40, who teaches in the political science department at the University of North Dakota in Grand Forks, is cofounder of the university’s Institute for the Study of Tribal Gaming Law and Policy.

With their small enrollment numbers and the success of their gaming and related operations, the Shakopee Sioux “have been at the forefront of charitable giving in Minnesota,” he said, and many of their grants and low-interest loans have gone to less fortunate tribes.

“They provided a loan and grant to the Rosebud Sioux in South Dakota for a tribally owned grocery store, and they made a large loan to the Oglala Sioux in 2004 for a casino expansion,” Light said. “So this is not unprecedented, though it would seem pretty risky to sink that much money into a new casino at a time of such economic uncertainty.

Gaming revenue growth slows
“Gaming revenue overall has flattened out in the last couple of years. Las Vegas is running scared right now, and its hotel occupancy rates are down. In a relative sense, Indian gaming is still doing OK — revenue has way out-paced commercial and charitable gaming in the past 10 years. But the growth has slowed there, too, from 15 percent growth in 2005 to 10 percent in 2006 and 5 percent in 2007.”

Around the country and especially in more rural areas, the recession has kept some gamblers from casinos and forced cuts in casino hours and staff. On Mississippi’s Gulf Coast, the Choctaw tribe recently announced layoffs of 550 employees at its Golden Moon Hotel and Casino, which will operate now only on weekends.

The Red Lake project “still makes sense,” Light said, because of the emphasis on nongambling amenities and the move closer to Bemidji.

“Every new casino is increasingly dependent on non-gaming revenues,” he said. “The tribal casinos that are still doing well are those that have those amenities and are close to urban areas.” And for Red Lake’s purposes, Bemidji (pop. 12,758) “counts as an urban area.”

The Palace Casino, operated by the Leech Lake Band of Ojibwe, still will be a few miles closer to Bemidji than the new Red Lake casino, but Red Lake is counting on the appeal of what’s promised to be “a classy place, family friendly with a lot of amenities,” Jourdain said.

The Treasure Island convention center, with a 3,000-seat showroom, “allows us to contend with entertainment venues around the state,” general manager Allan Kronberg said at the time of the August 2008 opening.

Those improvements and the Red Lake project appear to be the right strategy, Light said.

“Anyone who has been to Las Vegas recently knows that the trend is to upscaling,” he said. With Red Lake’s new all-suites hotel, each suite with a fireplace, plus an upscale restaurant and perhaps a golf course, “the band is exactly tracking what’s happening in Las Vegas.”