Much has been made of Barack Obama’s basketball-playing skills.

And much has been said of this: An African-American president can be a powerful role model for young black men, even more so than athletes (or, at least, that’s the hope). 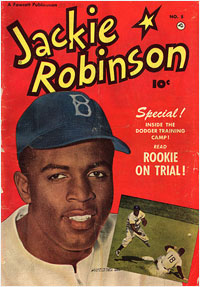 But George Vecsey, one of my sportswriting heroes, put the inauguration, Obama’s rise to the presidency and racism in sports in special perspective in a terrific column in Sunday’s New York Times.

It is a classic Vecsey column: well-reported, nicely reasoned, a teaching session and with a writing touch as light as a feather.

As sports fans watch any game this inauguration week, consider the power and courage of Jackie Robinson and other civil rights pioneers in sports.

Sports and the inauguration: A link worth reading