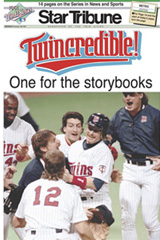 The Star Tribune, long the largest newspaper in the Upper Midwest, filed for Chapter 11 bankruptcy (PDF) Thursday night after months of struggling under a debt load created when the current owners bought it in 2007.

The bankruptcy filing occurs after the newspaper missed payments to its lenders and less than two years after Avista Capital Partners bought it for $530 million.

Because the filing is for a Chapter 11 reorganization rather than liquidation of the company, readers may not notice any immediate difference, said Edward Adams, a University of Minnesota law professor who specializes in bankruptcy.

“They can carry on as usual with business,” Adams said. “The public may not see any change for a few weeks or longer.”

In a statement last night, Harte said the filing would have no impact on home delivery, advertising, newsgathering or any other aspects of the paper’s operations.

“We intend to use the Chapter 11 process to make this great Twin Cities institution stronger, leaner and more efficient so that it is well positioned to benefit when economic conditions begin to improve,” Harte said.

(According to a report in the Star Triibune, the newspaper has assets of $493.2 million and liabilities of $661.1 million.)

In the petition, the Star Tribune checked a box that said “debtor estimates that, after any exempt property is excluded and administrative expenses paid, there will be no funds available for distribution to unsecured creditors.”

The largest unsecured creditor listed in the petition is newsprint company Abitibi/Bowater of Greenville, S.C., claiming $1,004,543 is owed to it (described as a trade debt).  The second largest is APAC Customer Service Inc. of Chicago, a telephone-based marketing services company, claiming $133,218, also a trade debt.

Other unsecured creditors include McClatchy Interactive of Raleigh, N.C., with claims of $91,160, and the Minnesota Timberwolves with a claim of nearly $58,000.

The Minneapolis newspaper is the nation’s 15th largest daily paper and 10th largest Sunday paper based on circulation. Other major papers around the country have been struggling too as advertising moved online.

Detroit’s two newspapers recently slashed home deliveries to three days a week. Owners of the Seattle Post-Intelligencer announced last week that the newspaper is for sale and, if a buyer cannot be found, the paper may go all-digital or shut down, the Associated Press reported. The Tribune Company, owner of the Chicago Tribune, Los Angeles Times and other newspapers, filed a Chapter 11 bankruptcy in December.

The Star Tribune’s financial problems may have been deeper because of debt the owners took on when they bought the newspaper in March 2007. The company that bought the newspaper from the McClatchy newspaper chain, Avista Capital Partners, is a private equity firm which currently has investments in 22 companies, 17 of them involved in energy and health and five in media.

The owners indicated last summer that they had borrowed for more than 80 percent of the $530-million purchase price. In May, the Star Tribune reported that the owners had written down their $100-million investment by 75 percent. At the time, the owners denied a New York Post report that the newspaper may file for bankruptcy. The newspaper had hired Blackstone Group, a financial advisory and restructuring firm, to analyze its options.

In a release shortly after the bankruptcy petition was filed, the newspaper said that it earned about $26 million in 2008 before making interest, taxes and debt payments, about half of what it earned in 2007.

Without debt-related payments, the newspaper would have been profitable through 2008, but less and less so.

“Since Avista bought us, they’ve run us into the ground, gotten us into too much debt. It’s not any of the union contracts that forced the Star Tribune to file for bankruptcy,” Guild co-Chair David Chanen told MinnPost’s David Brauer.

One fourth of the newsroom employees (including this writer) have taken buyouts or resigned since Avista bought the Star Tribune from the McClatchy newspaper chain.

Sharon Schmickle reports on foreign affairs, science and other topics. She can be reached at sschmickle [at] minnpost [dot] com.

Statement from the Minnesota Newspaper Guild Typographical Union, CWA Local 37002, regarding the Chapter 11 bankruptcy filing today by the Star Tribune