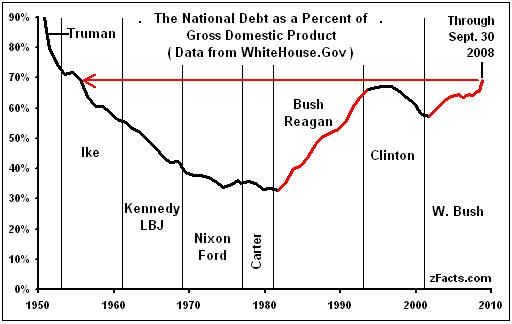 U.S. national debt through September ’08: How much of the nearly $10 trillion in bailout guarantees will wind up here? (zfacts.com)

Do you remember those quaint days, not so long ago, when the prospect of spending $1 trillion or so over many years to shore up Social Security was deemed ruinously expensive? Or, for that matter, when the word “trillion” only arose during the occasional spell of hand-wringing over the national debt? Events are moving so fast that it’s easy to forget we’ll spend many, many years with the decisions our government is making. I’m not just talking about the success or failure of efforts to keep the credit and banking system from total collapse. It’s also a matter of the massive volume of bad debt that’s being socialized in the process, and the further upward transfer of wealth that it implies.

[I]n truth, the plan assumes trillions more from the Fed, based on the Fed’s seemingly infinite capacity to backstop almost anyone putting up almost any collateral. The idea is to lure private investors into buying up the banks’ toxic assets, by having the Fed limit their downside risks. If private investors pay too much, the Fed picks up the tab.

Taken as a whole, this is hardly a model of transparency. To date, the Fed has already committed some $2.5 trillion to rescuing the financial system, yet no one outside the Fed knows exactly how or where this money went. The Fed is subject to almost no political oversight. Yet if the trillions of dollars the Fed has already committed and the trillions more it’s about to commit can’t be recouped, the federal debt explodes and you and I and other taxpayers are left holding the bag.

In other words, Geithner and Fed Chair Ben Bernanke continue to do pretty much what Hank Paulson and Bernanke did: They hide much of the true costs and risks to taxpayers of repairing the banking system.

Earlier this week, Bloomberg News updated its estimate of the total public guarantees proferred in the crisis by lending, spending and loss-backstopping assurances on the part of the U.S. government, the Federal Reserve Bank, and special guarantees by the FDIC. Counting the $800 billion stimulus package and the whole $700 billion for TARP (half of which is not yet formally committed), Bloomberg reporters Mark Pittman and Bob Ivry now put the number at $9.7 trillion. For the sake of perspective, this figure is more than double the total U.S. national debt as of the end of 2006, when it stood at about $4.5 trillion. Or: If you take the 9.5 million souls who live in the sprawling Chicago metro area, it’s a little over $1 million apiece.

More comps, from the Bloomberg story: “The $9.7 trillion in pledges would be enough to send a $1,430 check to every man, woman and child alive in the world. It’s 13 times what the U.S. has spent so far on wars in Iraq and Afghanistan, according to Congressional Budget Office data, and is almost enough to pay off every home mortgage loan in the U.S., calculated at $10.5 trillion by the Federal Reserve.”

And thanks to the ways the money is being used–to keep the banks in private hands and their shareholders out of harm’s way–the chances that these unthinkable sums will actually prevent continuing disaster appears to diminish by the day. As Martin Wolf of the Financial Times wrote in his Tuesday column, there has been an ongoing debate as to whether the crisis is one of illiquidity (money isn’t moving in credit markets because everyone is afraid) or insolvency (the major banks’ liabilities are worth more than their assets; they’re broke). The U.S. response presumes the problem is illiquidity, or confidence; a growing number of economists think the banking system is simply broke.

The new plan seems to make sense if and only if the principal problem is illiquidity. Offering guarantees and buying some portion of the toxic assets, while limiting new capital injections to less than the $350bn left in the Tarp, cannot deal with the insolvency problem identified by informed observers. Indeed, any toxic asset purchase or guarantee programme must be an ineffective, inefficient and inequitable way to rescue inadequately capitalised financial institutions: ineffective, because the government must buy vast amounts of doubtful assets at excessive prices or provide over-generous guarantees, to render insolvent banks solvent; inefficient, because big capital injections or conversion of debt into equity are better ways to recapitalise banks; and inequitable, because big subsidies would go to failed institutions and private buyers of bad assets.

Why then is the administration making what appears to be a blunder? It may be that it is hoping for the best. But it also seems it has set itself the wrong question. It has not asked what needs to be done to be sure of a solution. It has asked itself, instead, what is the best it can do given three arbitrary, self-imposed constraints: no nationalisation; no losses for bondholders; and no more money from Congress. Yet why does a new administration, confronting a huge crisis, not try to change the terms of debate? This timidity is depressing.

But are the constraints on the administration really “arbitrary” and “self-imposed”? The ultimate peril of our monstrously overgrown financial sector–which, pre-crash, accounted for about 20 percent of GDP and 30-40 percent of U.S. corporate profits, proportions that are absolutely unprecedented in U.S. history–is that government has a veryhard time seizing control of the banking system when the banking system, for practical purposes, has seized control of the government.