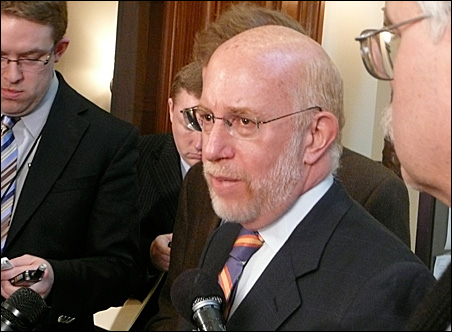 With more and more possible votes washing away in court today, Ben Ginsberg’s attack on the decisions of the three-judge panel overseeing the Norm Coleman-Al Franken Senate recount trial intensified.

The high-powered, high-priced, high-IQ’d lawyer from Washington, D.C., is crafting the message and policy of the Coleman legal team.

Ginsberg, who has notches on his belt from the 2004 Swift Boat case and the representation of George W. Bush in 2000 Bush v. Gore case, has worked for Coleman for six years, counseling him on election law and other matters.

The target today was — scary music, please — “the Friday the 13th ruling.” The implication — as if we didn’t know it already — is that the Coleman side is poised to appeal, should Franken retain his lead in the recount.

“Friday the 13th” references have come to pepper Ginsberg’s news briefings: images of omen and doom.

For Coleman’s side, that is.

Doom and gloom for election’s fate?
But, also, to hear Mr. Ginsberg speak, it’s doom-and-gloom for the three-judge panel in this case and, indeed, for the 2008 U.S. Senate election.

The “Friday the 13th ruling” is how Ginsberg, a publicly pleasant fellow with a sharp, stabbing and poetic tongue, is referring to the order set down Friday by Judges Elizabeth Hayden, Kurt Marben and Denise Reilly. That’s when the judges eliminated 13 of 19 ballot categories that have been offered as evidence in this trial. Poof. At least 1,000 potential absentee ballots proposed for inspection were swept away.

On Monday, the Coleman campaign asked to get the chance to petition the court to reconsider that ruling.

Today, in the most succinct ruling of the trial, the tribunal wrote, “Denied.” (PDF)

The judges, writing that there was no “systemic” problem in the election, don’t want to hear from Coleman’s side on these ballot issues.

Today, in an impromptu session with journalists and at two formal briefings, Ginsberg asserted that the judges had stepped into “legal quicksand” and, with controlled anger, said the judges have brought “fatally flawed” inconsistencies to the case.

Ginsberg’s main point: Their ruling Friday eliminated some ballot categories that were already included in other parts of the recount.

For instance, he claims, 100 of the 933 previously rejected absentee ballots opened and counted Jan. 3 by the State Canvassing Board would have been tossed out under the judges’ Friday the 13th ruling.

He’s not saying those 933 should be uncounted. Indeed, both sides and the judges already have agreed — “stipulated” in legalese — that the 933 are untouchable.

But Ginsberg is saying the application of state law to those 933 should be used for other still-unexamined ballots.

“The judges contradicted their own signed stipulation,” he said. “You can’t have it both ways, and you can’t count illegal votes in a certified election.”

He added: “We want this process to be finished with credibility.”


Ginsberg hammering other issues, too
Also, Ginsberg is hammering away at other categories the court hasn’t addressed, such as whether witnesses of absentee ballot applicants must be registered. Some counties cared. Others didn’t.

One county that blocked ballots was Carver County, to the tune of about 180 ballots.

Coleman won that county (55 percent to Franken’s 29) so it’s no wonder Mr. Ginsberg wants Carver County to loosen up its stranglehold on that kind of rejection.

Yes, you’ve heard this theme before. It goes to the notion of “equal protection,” which triggers the mention of the 2000 Bush v. Gore election, Florida’s the mother of all recounts without standards.

But the Hayden-Marben-Reilly troika hasn’t seen any systemic problems and expressly rejected a Bush v. Gore comparison weeks ago in a ruling.

“Their window is closing, and that universe is shrinking and they’re looking to build a record for appeal … however non-meritorious that may be,” Elias said.

Ginsberg wouldn’t reveal his side’s specific appeals strategy, but they probably have to ride out this case before seeking help in a higher court. Probably.

Ginsberg insisted that Coleman is determined to win in this Minnesota court because there are, in his view, now more illegal votes in the recount than Al Franken’s margin of 225 votes.

Elias swatted away the notion that there’s been an overabundance of inconsistency in the election, although a layperson sitting through it comes away with one conclusion: Minnesota’s absentee ballot evaluation process needs a major overhaul.

It sure seems as if county election officials — when it comes to absentee ballots —  didn’t consistently follow the rules.

“Some mistakes happen … and variances in elections,” Elias said, a bit too casually for this layperson. He said that locally run elections are what we do as a nation. “It is both the beauty of federalism and the inconvenience of federalism.”

If Coleman and Ginsberg have got an issue with that, Elias said, there’s always the U.S. Senate for their next forum.

Still, Elias reasoned, because one county made a mistake or mistakes under the law, that doesn’t mean votes in other counties should be wrongly counted or barred.

But, just in case, the Franken side submitted a memorandum this afternoon asking the three judges to rule proactively that Coleman’s “equal protection claim is deficient as a matter of law.”

Franken wants to “put the nail in the coffin” of the Bush v. Gore matter, Elias said.

At the end of his noon briefing and the repeated references to “Friday the 13th,” I jokingly asked Ginsberg if other bad things had happened in his life on Friday the 13th.

As he returned to the courtroom, he turned and smiled. (Yes. Ben Ginsberg has a bright smile.)

“I didn’t consider this a bad thing, strangely,” he said.

It might be Elias’ view that the window is closing on Coleman. But it seems to be Ginsberg’s view that — because these three judges stepped in quicksand — the door to other courtrooms elsewhere might just as surely be opening.