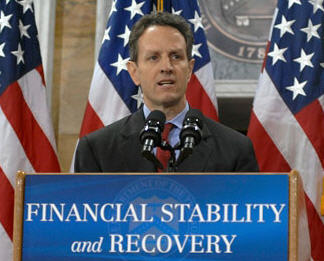 The details of the Treasury Department’s plan for stress-testing America’s 15-20 biggest banks are emerging, and the news is dispiriting. It’s not because the economic scenarios envisioned by Treasury are so dire; it’s because they aren’t.

The purpose of the stress tests is to make judgments about how much federal money will be necessary to restore the banks to solvency so that their level of capitalization ceases to be a central limiting factor in the credit crunch. Toward that end, there is every reason to do rigorous exams that test the capacity of the banks under worst-case economic conditions as well as more moderate ones. But Treasury’s worst case at present is a 2009 unemployment rate that does not exceed 8.9 percent, and an additional drop in housing prices of no more than 22 percent for the year. The benchmark scenario–the one planners claim to expect–is an 8.4 unemployment rate and a 14 percent house price decline. That’s just silly. (Dean Baker thinks we’ll pass that unemployment figure by March.)

Add it all up and the projections reckon that at worst, the U.S. economy will contract by 3.3 percent in 2009.

You get the sense that the government’s stress testing, which is supposed to be completed by sometime in April, is an exercise in public relations as much as contingency planning. Like all the other half-measures employed so far to scuttle talk of nationalizing the biggest banks, it seems predicated on the wishful assumption that government endorsement of the banks’ relative health will go a long way toward assuring the financial system that they aren’t effectively broke. “It sure sounds to me like they are designing this to make it sound like the banking system is in great shape,” one bank stock analyst told the New York Times.

Let’s hope the damage wrought this year stays within the specified worst-case ranges, but something worse is at least plausible and probably likely.

Consider first that the Bureau of Economic Analysis released a revision this morning of fourth quarter 2008 GDP contraction. The initial number had been -3.8 percent; now it’s -6.2 percent. “And if the data on new unemployment claims are any indication (which they are),” writes Krugman this morning, “the economy is continuing to plunge at least as fast.”

Consider second that new home prices dropped 10 percent from December to January. Dean Baker points out that the data here is volatile–but, he writes, “even if the decline was only half this large, a 5 percent single month decline in house prices is enormous. This suggests that house prices are in a free fall.”

Consider third these words on the employment outlook from an analyst quoted at the Wall Street Journal’s Real-Time Economics blog: “The trend in claims is sharply upwards, reflecting the depth of the recession, and we see no reason for it to peak anytime soon. Indeed, adjusted for population growth, claims are still well short of the peaks seen in the mid-70s and early 80s; to match them now would require the weekly numbers to breach the 1 million mark. We fervently hope that does not happen but we are not confident. Companies are throwing in the towel as they recognize that no sector is safe. On the back of these data we have to expect the rate of fall of payrolls to rise further; 750,000 monthly declines are looming.“

And finally, regarding the nexus of employment and housing, add a sprinkling of common sense. As one former Twin Cities real estate exec put it to me recently, “What’s the most important thing when we’re looking at housing now? Employment. There’s no way the housing market stabilizes or recovers while unemployment is rising hand over fist. It can’t happen.”