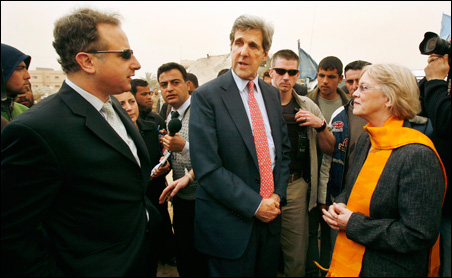 REUTERS/Suhaib Salem
Sen. John Kerry, who along with Reps. Keith Ellison and Brian Baird, made a rare trip to Gaza today.

WASHINGTON, D.C. — Against the advice of the U.S. State Department, Rep. Keith Ellison traveled to the Gaza Strip today to view the recent destruction by Israel and to help inform policy he hopes to develop as a newly appointed member of the House foreign affairs committee.

The Minnesota Democrat, who was accompanied by Rep. Brian Baird, D-Wash., was one of the first members of Congress to enter the area since the Islamic militant group Hamas took power nearly two years ago. Sen. John Kerry, chairman of the Senate Foreign Relations Committee, also toured Gaza today. Kerry, D-Mass., entered the Gaza Strip separately from Ellison and Baird.

“As a member of the U.S. Congress, it is critical that we see it,” Ellison said by phone. “We make decisions about this part of the world all the time from Washington, D.C., and yet we were the first people from the American government to come here in three years.”

Ellison and Baird, who were escorted by native Minnesotan and U.N. worker Stephanie Fox, met with residents of Gaza and relief workers for most of the day on Thursday.

The trip came hours after Israel declared that it would not open Gaza’s blocked borders until Hamas militants freed a captured Israeli soldier. The State Department had warned the Congressmen about security concerns in the region.

Ellison said that he found the conditions in Gaza “shocking.”

Both Congressmen roamed the rubble for hours, moving from destroyed homes, to a ruined cookie factory, to a school that had been bombed, killing the caretaker inside.

Emotional experience
The experience was an emotional one for Ellison. “I was just shaking, and I found myself a little speechless,” he said.

Ellison, the first Muslim elected to Congress, has made multiple trips to the Middle East, including a trip to Israel, since joining Congress.

Before entering Gaza through Jerusalem, Ellison and Baird met with Riad Maliki, the foreign minister of the Palestinian Authority, in Ramallah.

On Friday, he plans to travel to the Israeli town of Sderot, the site of numerous rocket attacks by Hamas, which is considered a terrorist organization in the United States.

Israel launched its offensive on Dec. 27th in what it said was an effort to stop Hamas attacks against Israeli communities along the border.

On Thursday, Ellison suggested that the restrictions that Israel had placed on items that could enter Gaza had impeded recovery in the region.

“What the Israel government defines as humanitarian goods is very narrow,” said Ellison. “You can’t get macaroni or lentils or reconstruction materials in.”

In January, Ellison was among 22 Representatives who voted “present” for a resolution that reaffirmed U.S. support for Israel and Israel’s right to defend itself against attacks.

At the time, he indicated that the resolution did not go far enough in acknowledging the tremendous human suffering in Gaza.

More needs to be done
While Ellison has praised President Barack Obama’s efforts in the Muslim world so far, he said that more still needed to be done in the Israel Palestine region and that the stakes were high.

“I think President Barack Obama is off to a phenomenal start, but it is going to take all he has,” said Ellison. “The resolution of the Israeli Palestine conflict will resolve much more than that. It will improve our relationship throughout the Muslim world.”

Ellison said that he would like to see legislation this session that recognizes and rewards Palestinians who choose not to engage in the warfare.

“There hasn’t been enough reward for people who stick with the negotiation process,” said Ellison. “Throughout the Gaza crisis you didn’t see any rockets coming from the West Bank and that is because the Palestinian Authority maintained order. But what do they get for this?”

“I think the Israel government would be a lot more careful with the welfare of people in Gaza if American Congressmen were watching with their own eyes and not from a distance,” Ellison said.

Steve Hunegs, executive director of the Jewish Community Relations Council, called Ellison “a friend of Israel” and said that he would like to hear Ellison’s impressions of what he saw and heard once he returns.

In an interview late Thursday, Hunegs said: “He is discharging his responsibility as a member of the foreign relations committee. It is important for anyone in this situation to learn as much as they can.”