You might have heard that the McKnight Foundation, Minnesota’s largest private foundation and leading arts funder, lost $700 million or 30 percent of its endowment because of the plummeting stock market in 2008.

What does such a staggering loss mean for Minnesota’s arts organizations? This year, it means the foundation will award $8.6 million in arts grants, down 14 percent from $10 million in 2008, says Vickie Benson, arts program officer for McKnight. There is no firm number yet for 2010, but Benson expects the cuts will be somewhat deeper.

Consider that the McKnight Foundation’s annual arts-grants budget has come close to the Minnesota State Arts Board’s $10.2 million budget, which the governor wants to slash, and you’ll understand why arts groups are rattled. (His budget envisions a phase-out of the board’s budget, with a cut to $6.9 million in 2010, to $3.4 million for 2011 and zero after that.) And even though the Clean Water, Land and Legacy Amendment is expected to yield about $50 million for the arts starting in 2010, there’s another battle on how the money will be allocated and to whom.

“I think that everyone expects that there would be some sort of trim from the governor’s budget, but the 50 percent definitely seems like taking early advantage of the funds promised by the constitutional amendment,” Benson said. “And the idea to turn the State Arts Board into a nonprofit indicates that the governor didn’t exactly hear the loud statement by voters when they overwhelmingly chose to support the constitutional amendment. Minnesota is known throughout the country as an arts mecca, and to not have a state agency supporting the structure doesn’t make sense to me.”

Meanwhile, there are whispers in the arts community that McKnight has been declining letters of inquiry from potential applicants or has been “uninviting” organizations to apply for grants. “I’ve been hearing the same whispers,” Benson told MinnPost in a recent interview.

“There will be very, very few new organizations [i.e., new applicants to McKnight] that will receive funding,” she acknowledges, “but we haven’t stopped taking new letters of inquiry because we always want to make sure that we don’t miss an opportunity for a great fit.”

Benson wants to set the record straight on a few other things.

Still committed
“I want to be clear that the McKnight board has not lessened their commitment to the arts,” she said.

Minneapolis-based McKnight is not cutting arts funding any more severely than other programs, she says. Although the Internal Revenue Service requires tax-exempt foundations to spend a minimum of 5 percent of their asset base or endowment each year, McKnight has said it will spend above the minimum to lessen the blow to its grant programs. 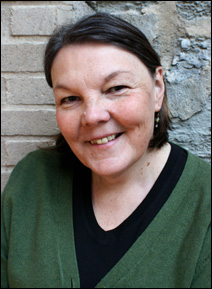 The foundation’s net assets were about $2.3 billion at the end of 2007, and it awarded $111.6 million in grants, according to the latest records on file with the Minnesota Attorney General’s office. Assets grew by $103 million in 2007, but how quickly things can change in a year: McKnight has said it lost $700 million in 2008, meaning the base is now worth about $1.6 billion. Under IRS rules, the foundation is required to spend a minimum of $80 million between grants and foundation expenses in 2009.

So, what else can individual arts organizations expect from McKnight in a rocky economy, with $1.4 million less to give this year and a further reduced budget next year?

Besides the difficulty first-time applicants will have getting a foot in the door, some grantees may not receive funding when they come up for renewal, and others will see a trim from previous grant amounts, Benson said. “No one will see an increase in this kind of time.”

Nonetheless, all current grant commitments will be fulfilled, she said.

“The largest part of our program is for general operating support and that hasn’t changed,” she said. “Now the percentage will change obviously because we’re down, but our focus is still about professional artwork and public access to quality art.”

Explaining the process
What about all the confusion over the letter of inquiry and the “uninviting” of grant applicants?

The letter of inquiry is a two-page summary of “how we get to know organizations that we haven’t met,” Benson explains. If the letter of inquiry looks like a “great fit” with McKnight’s mission, a full-blown proposal is requested, she says, adding that it takes about three months to make a decision on a grant. Still, it’s no guarantee money will be awarded.

Another misconception, Benson said, is that McKnight recently instituted a two-year funding cycle for arts grantees as a direct result of the recession. In the past, McKnight has funded three-year cycles, but the two-year cycle was implemented before the economic slide, she said.

The shorter cycle was set up as part of an ongoing evaluation of McKnight’s arts-funding program by William Cleveland, director of the Center for the Study of Art and Community and author of “Art and Upheaval: Artists on the World’s Frontlines.” His evaluation, which Benson says will include “the state of the arts ecosystem” in Minnesota, is expected at the end of February.

Hearing a lot of fear
Meanwhile, Benson says she and her staff have been fielding a lot of phone calls from arts groups fretting about McKnight funding and the worsening economy because consumers tend to cut discretionary spending on the arts.

“I’m hearing a lot of fear — a fear of the unknown,” she said. But recently she’s been hearing “gratefulness” because of a roundtable discussion that McKnight’s president had with arts grantees in January to listen to their concerns.

This certainly isn’t the first time McKnight cut back its arts funding. Though it doled out $11 million-plus at one point annually in the late 1990s, it ratcheted back to $7.6 million in 2003 after stock market declines and the Sept. 11, 2001, attacks. McKnight has been gradually building up to the $10 million spent last year (as well as in 2007) as the stock market improved and its asset base grew.

Benson understands that it’s hard to keep perspective in the midst of cuts. She’s having some difficulty herself.

“I would like to say that while we are dealing with this relatively large cut to our budget, the positive aspect is that it’s still $8.6 million, and I have to remind myself of that as well because I can get bogged down by the bad news,” she said. “But McKnight is still the largest foundation in Minnesota, and it’s still committed to Minnesota and the arts.”

Heads up to nonprofits: Foundations expect 4-percent decrease in grant-making in 2009, by Scott Russell, Jan. 9, 2009

How deep will McKnight cut grants to the arts?