It’s not perfect, not even close. Coverage in traditional news media skews almost exclusively to men’s sports. Girls still fight an uphill battle in getting the same respect as boys in the world of sports.

Still, at places like the University of Minnesota, facilities have been built for women. Some sports, such as women’s basketball and volleyball, have established a strong base of fans, bringing in thousands of ticket buyers who care about women athletes. High schools, generally, embrace girls sports.

Which brings us to today, National Girls and Women’s Sports Day.

An event at the State Capitol at noon marks the day.

It also brings us to the Twin Cities sports marketplace’s enigma: the Minnesota Lynx.

The Lynx are the lone major-league women’s professional sports team in the state, but a franchise going through yet another transition as it fights — after a decade — to broaden its niche among basketball fans.

The Lynx — who play basketball indoors during the most pleasant months of Minnesota’s spring and summer — have struggled for more than a decade to be a relevant product in our cluttered sports market, which — like other consumer sectors — is feeling the pinch of the economy. Remember, even the Vikings had trouble selling out many games this past season.

For this day that celebrates the accomplishments of women on the field of play and ponders the road ahead, we checked in with … a guy.

Why? Because Conrad Smith is the fellow whose job it is to elevate the Lynx. 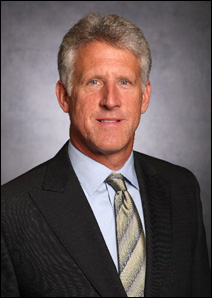 Smith, 52, may be the new face operating the 11-year-old franchise from day to day, but Smith is an old guy around sports sales in this town, having worked for the North Stars, Twins and Timberwolves. He knows the sports marketing and corporate sales ropes.

This is good. While the Lynx are owned by Timberwolves owner Glen Taylor and have, from the very top, been run by Taylor son-in-law and accountant Roger Griffith, clearly it’s a lack of ticket sales that’s been harming the team.

The Lynx have had trouble cracking average attendance of 7,000 the past three seasons after attracting more than 10,000 fans per game in the team’s inaugural season in 1999. They languished near the bottom of the WNBA’s attendance rankings.

Just last spring, we reported on a fancy, expensive ad campaign to alter the Lynx image a bit.

There was a theory then, trickling down from the marketing geniuses at WNBA headquarters in New York that, as someone told me, the “male is the gatekeeper to athletic events in the household.”

An expensive branding, image campaign ensued for the Lynx.

“Last year, the league went more towards the male consumer thinking that the male is the one that controls the purse strings, and I think that was a terrible mistake,” Smith told MinnPost the other day. “The idea was, ‘Let’s go after the basketball fans.’ You got to go a lot farther than that. That was a misstep on our part.”

A $10,000 billboard may have caused buzz among the media intelligentsia, but, Smith knows, maybe only 10 percent of the commuters who saw it would ever consider going to a Lynx game.

“That means nine thousand of those dollars are wasted,” he said.

That’s a lot of dough when the entire Lynx player payroll is about $800,000 … or what NBA star Kevin Garnett makes in three games. (Equal pay for equal work doesn’t apply in the sports world yet.)

Despite ads on buses, billboards and the web, Lynx attendance didn’t grow. No-shows at games were super high. The team finished in last place in the Western Conference.

For the 2009 season, which begins June 6, Smith, who was promoted to Lynx chief operating officer last November, is going to get down to the nitty-gritty of sales.

Lynx players made nearly 200 personal appearances to community and corporate groups. But rarely did they result in ticket sales and fans in Target Center seats. From here on in, if a player goes to a school or a community center, a Lynx ticket or corporate sales rep will accompany her.

Direct mail, web ads, focused phone lists, special half-time and post-game concerts will be part of the mix.
Could the Lynx play an outdoor game come 2010 in the new Twins ballpark, just across I-394 from Target Center? It’s a thought. Twins-Lynx ticket packages or, at least, a marketing link are being discussed.

The base has to broaden beyond the small core of 1,700 season-ticket-holders. The value, in this economy, has to be perceived as real.

“These are the best women basketball players in the world, there’s no doubt about it,” Smith said.

So, it seems that Smith, the WNBA and Lynx are drifting back to the notion that the league is as much a social cause as it is a viable entertainment option, a sort of “I am woman, watch me roar … and drive to the hoop.”

“I would hope that would always be part of the message and always will be,” Smith said. “I have two daughters. One of things as a parent I’ve done is to really work with their self-esteem … To say, ‘You can be anything you want to be.’ I think that’s an important message to get out there. I think there’s a void [for girls]. I think there’s an opportunity for our players to send that message, too. Girls may not have that support at home.”

From eating disorders to dating to exercising. Maybe Lynx players can make a difference, said Smith, who also has a son.

If it seems odd that a man is now driving the business of a women’s franchise, know that Smith has been working for the Lynx financial success since Taylor brought the team here.

While heading corporate sales and then business development for the Timberwolves, he also helped sell Lynx corporate packages to Verizon, Target, Best Buy and Treasure Island, bringing in $1 million a year in corporate support.

The Woburn, Mass., native came to the Twin Cities 25 years ago, first with the old Minnesota Strikers soccer team. He moved to the North Stars hockey franchise, selling sponsorships and then the Twins in 1991 before joining the Timberwolves in 1995.

How will the Lynx break through? Can Smith change the market’s appetite?

“Educated, intelligent, concerned, committed women” is how he describes the players. “People need to get to know them … I think it’s a viable entertainment option.”