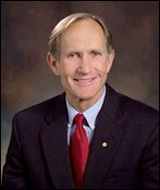 Dr. Peter Agre joked Monday morning that he was hiding in fear in his Chicago hotel room at the annual meeting of the American Association for the Advancement of Science. Within an hour of our phone conversation, he was to become president of the prestigious organization.

But hiding is exactly the opposite of what the Minneapolis native has done since 2003, when he shared the Nobel Prize in Chemistry for his team’s discovery of the microscopic channels that allow water molecules to pass through cell membranes.

In 2007, Agre flirted with a run for the U.S. Senate seat that now is locked in limbo while Norm Coleman and Al Franken dicker over absentee ballots. The Minnesota DFL did not encourage Agre, and he pulled his hat from the ring.

Agre said Monday that his interest in the race had been serious: “I’d rather see a scientist or a medical doctor in the seat than a comedian or a lawyer.”

My Nobel for your bully pulpit
Instead of running for the Senate, Agre helped found and promote Scientists and Engineers for America, which encourages researchers to run for local office and to thrust science issues into political debates.

He also was a science adviser to the campaign of now President Barack Obama.

Agre even appeared on Comedy Central’s “Colbert Report,” where he proposed an outrageous swap: He offered to let Stephen Colbert hold his Nobel Prize for two weeks while Scientists and Engineers for America would take over the show and use it to trumpet their issues.

Agre, who is 60, would like you to know “that this is not a midlife crisis.”

He has long been engaged in civic life.

“Since I won the Nobel, people just started noticing it more,” he said.

While a student at Minneapolis Roosevelt High School he started an underground newspaper, attended school board meetings and generally stirred things up. (He got a D in chemistry.)

Tom Sawyer’s science
I’ve interviewed Agre several times, starting with the day in 2003 when he got a phone call from “a very polite gentleman with a Swedish accent” informing him the Nobel Committee had chosen him and Dr. Roderick MacKinnon of the Howard Hughes Medical Institute to share the prize in chemistry.

While writing science stories over the years, I’ve often thought of our conversation that day and how Agre summed up the vocation of the scientist. The stereotype of the cold-hearted, aloof scientist is all wrong, he said. Scientists are Huck Finns and Tom Sawyers, adventuring on nature’s great river with their eyes open for surprises around every bend.

In that spirit, taking the helm of AAAS is not by any means a withdrawal to a world of secluded laboratories. The nation’s largest science organization operates very much in the civic arena. Indeed, a theme the organization is promoting this year has to do with strengthening bridges between science and society.

“We hope that as scientists, we can do things politicians can’t do,” he said. “We are there to talk about science in terms of agriculture and medicine and other everyday things — things peaceful.”

Rather than pull back from the civic arena, Agre sees his new role as that of an ambassador for science, says the AAAS profile of the organization’s new president.

“Because climate change and the financial crisis open the door to an era of innovation and transformation, he sees an opportune moment for researchers to reach out to schoolchildren and their teachers, local and national policymakers, and (science and technology) colleagues overseas,” it said.

AAAS also is deeply engaged in promoting science diplomacy around the world, much the way that U.S. scientists did during the Cold War by opening discussions with their colleagues in the Soviet Union and China. This time, the efforts at détente are aimed at the Arab and Muslim world and also North Korea.

The international reach fits Agre’s global interests. After he earned his bachelor’s degree in chemistry at Augsburg College in Minneapolis in 1970, he traveled around the world by rail and foot.

“There is so much potential for science in terms of diplomacy,” he said Monday.

Norwegian BlackBerry
In the midst of outlining his visions for AAAS this year, Agre accidentally cut off our phone call. He called back right away. These BlackBerry phones must be made by Norwegians, he quipped. (He’s Norwegian.)

Agre was born in Northfield, Minn., where his father — Professor Courtland Agre — was chairman of the chemistry department at St. Olaf College before he moved on to the same position at Augsburg and the family settled into a house near Lake Nokomis.

While most of his relatives still live in Minnesota and Wisconsin, Peter Agre left for the Johns Hopkins School of Medicine in Baltimore, where he earned his medical degree in 1974 and later became a chemistry professor. He worked for a time as vice chancellor for science and technology at Duke University Medical Center. Now he is back at Hopkins, where he heads the Malaria Research Institute.

Agre hasn’t forgotten Minnesota though. He comes back often. Last week, he was here to give a chemistry lecture at Concordia College in Moorhead, ski the Vasaloppet cross-country race in Mora and celebrate his mother’s 84th birthday. This summer, he is scheduled to participate in a science workshop for Augsburg and St. Olaf colleges.

“My job keeps me elsewhere, but Minnesota is my home,” he said.

Sharon Schmickle covers science, foreign affairs and other topics and can be reached at sschmickle [at] minnpost [dot] com.