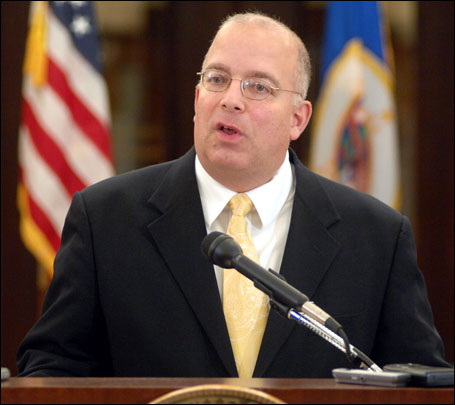 Photo by Craig Lassig
Tom Hanson: “Implementation will be a challenge, but it will be successful.”

Tom Hanson, commissioner of Minnesota Management and Budget, might be the most important man in the state right now.

Hanson’s job, which he has held since December 2006 under the appointment of Gov. Tim Pawlenty, was important enough before he was tapped by the governor on Jan. 30 to be the state’s “Federal Stimulus Coordinator.”

Now, as the President Barack Obama’s stimulus package becomes law, Hanson holds all the purse strings — to the tune of what he figures to be $4 billion into 2011.

Hanson is a 45-year-old native of Mahnomen and a graduate of Concordia College in Moorhead, Minn. After a stint at George Mason University, where he earned a law degree, he came back to Minnesota to work with the state House Republican caucus in 1994. There, he worked his way up first through the caucus administrative ranks, then took a number of advisory roles in the Pawlenty administration beginning in 2001.

He is not, it should be noted, an economist, and that — combined with his sudden dual roles — has caused some DFL lawmakers to squawk about his new position.

Hanson, who lives in Maples Gove with his wife, Kris, and their 12-year-old son, Sam, carries around a black soft-leather briefcase with spreadsheets spilling out these days. Even he is unclear on some aspects of the package.

On Monday morning, MinnPost caught up with a busy Hanson on the fourth floor of the Centennial Office Building on the Capitol grounds, where the commissioner-cum-stimulus czar noted that the water cooler in the office kitchen was about to be put out to pasture. “My decision,” he said, adding that the nod toward more austerity in his department would probably save only a couple thousand bucks. “It sets the right example.”

MinnPost: The first question: how much money are we talking about?

MP: And immediately, we think?

TH: We should start receiving sometime in late March. We will receive money in fiscal ’09, fiscal ’10, and the first half of fiscal ’11. So for our purposes, it will affect the end of the fiscal 2009 biennium, as well as be available for the fiscal 2010-11 biennium.

MP: And the second two categories?

TH: Excuse me, I don’t have a figure for you yet, but it’s all the other non-general funds. Trunk highway is probably the biggest category. That’s probably going to be $500 to $600 million. And there’s other funds there that are non-general fund.

We did some pre-planning. We have focused on what our barriers might be. For example, in the trunk highway fund, it is required that within a certain number of days for money to obligated at least 50 percent of highway funds.

MP: Have you seen a noticeable increase in your popularity?

TH: I get a lot of phone calls. [laughs.] I am coordinating the response. I am no more nor less relevant than I normally am. My responsibility is to coordinate the governor’s budget and advise him of decisions, and make sure we have a presentable package to the Legislature.

MP: Is there a point here where you are currying favor, or are you looking at this as objectively as you can?

TH: Well, I take my cues from my boss [Pawlenty]. And we look at how the best case the money might be spent, how we sort through the barriers and make our recommendations, and we’ll look at where we go from there.

MP: There’s almost no Republican votes behind this package. Gov. Pawlenty has expressed some misgivings going back as far as December about receiving some of this money. If you really wanted to take an ideological stand, would there be a point where he’d want to turn down some of this money?

TH: He expressed a concern regarding passing it at all.

TH: And the size of the federal debt, and those are valid concerns. But once it moves beyond the point where it looks like it’s going pass, we will do everything we can to get Minnesota’s fair share.

MP: But it’s easy to say, “We don’t like it,” and then turn around and take the money.

TH: I don’t think he’s been inconsistent at all. It’s one thing to express concern [over the federal deficit], but once it’s done, we have a the responsibility to our citizens to accept and use whatever we can.

MP: Can you put into concrete terms what this means for regular Minnesotans?

TH: Your average Minnesotan might notice the reduction in their taxes, $400 or $800 per couple. They might notice, perhaps a few more orange cones, or some projects being done that they had heard were going to take a while.

MP: So, will there be a scenario where Bloomington gets money for X, Y and Z?

TH: I don’t think we’ve gone to that type of detail. [Leafs thought papers.] Counties are big participants in human services. They might see some sort of benefit. And there are some funds that are direct pass-through to cities and counties as well. It’s like drinking out of a fire hose. [laughs.] A lot of information coming very fast.

MP: Some people have raised the notion of you doing double duty here. Has this cut into your day job?

TH: I can walk and chew gum at the same time. I am a coordinator; it [be] will implemented as part of the governor’s 2010-2011 budget. We all have to do it together. If I were doing it by myself, it would be too much, but I am not.

MP: In your mind or the governor’s mind, does this really do anything to alleviate what is obviously a dire state budget crunch?

TH: What this does is help us at a time — I guess I’ve used the term, “It’s not an ordinary time.” We have a lot of people who are becoming unemployed, our revenues are declining. This money will help us one time to cushion the blow of the recession to the people of our state.

In the long run, it does not — the money we get from the federal government is one-time. It is only here for 2010-11, it’s not here for the spending charges we’ll have in 2012-13 and ongoing. We’ll still have to deal with those.

But for now, this is critical to help us help our citizens.

MP: Does this do anything to make sure there are jobs to be had here in the next 12 to 18 months? Or is that wishful thinking?

TH: [Long pause] I think the fact that it leads to the construction industry, if we’re keeping people afloat that would probably go out of business but for [the package], that helps.

MP: Are you happy to be getting this money?

TH: It will be very helpful to us. Implementation will be a challenge, but it will be successful.

Minnesota’s ‘stimulus coordinator’ on federal money: How much we’ll get and how we’ll spend it