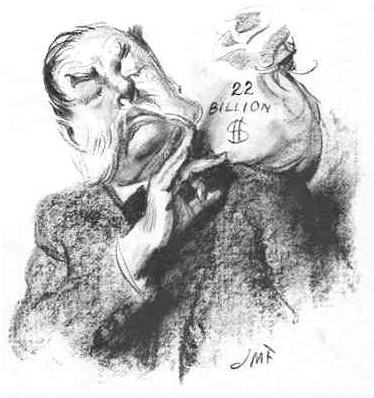 When the dominoes began tumbling last year with the collapse of Lehman Brothers, it looked to a lot of very smart people as if the neoliberal regime of unregulated financial markets and untethered global capital was doomed. The government would have to take charge of the reins of the economy, which meant taking charge of bankrupt major financial institutions and beginning the long process of setting them right side up again–as Sweden had done in the 1990s and Japan had failed to do when its real estate and stock markets crashed.

That judgment now seems a tad premature. The Obama administration, for all its efforts to assure the public that future bailout funds will come with meaningful strings attached–such as the current pledge to make sure banks that get federal money meet lending targets–seems hell-bent on doing all it can to avoid taking the banks away from the managers who helped spawn the crisis. Which, for practical purposes, also means minimizing the chance that taxpayers will ultimately get decent compensation for the capital they’re providing. (And as for the quality of the government’s safeguards: Didn’t we hear the same kinds of assurances about terms and conditions from the same voices after Congress approved the first $350 billion in bailouts?)

Stiglitz amplified the critique in an essay published last week in the Times of London:

The value of government-provided capital now dwarfs remaining shareholder equity, yet in the US the national interest does not even have a seat at the table…. Attention should have focused on maximising bang for the buck in bailouts. That would have meant giving more to regional and community banks. It would have meant linking the cash to maintenance of credit.

There was a trickle-down strategy: throwing money at the banks would trickle down to the rest of the economy. A trickle-up strategy, to prevent foreclosures, would almost surely have been far more successful. Too much attention was directed at saving failed and flawed institutions, too little at creating new alternatives. Think what $700 billion might have done, were it used to capitalise some new banking institutions. At modest leverage of 12 to 1, it would have financed $8.4 trillion of credit, enough to meet America’s needs.

There are two other concerns that should guide reforms. First, national debt has ballooned, especially in the US. So, not only do we have to be sure we get the most bang for the buck, but we have to get the best return. Congress intended to provide money in a way that generated as high a taxpayer return from these risky investments as possible. In practice, America got a raw deal. This means that US national debt ten years on will be larger, perhaps much larger.

The second concern is that in solving immediate problems, we do not create problems for the future. Part of the present problem is that we let banks grow too big to fail. Yet we have encouraged consolidation. And by making clear that we will bail out large banks we enhanced “moral hazard”: banks know that if they gamble and win, they walk off with the proceeds; if they lose, the taxpayer picks up the tab.

One reason that matters in the US have turned out so badly is that we left much of the responsibility for getting us out of the mess with those who created it. At first, they acted as if it was just a matter of confidence: if government shows it is willing to spend a lot, confidence will be restored – and then it won’t even have to spend the money. What foolishness!

[B]anks need more capital. In normal times, banks raise capital by selling stock to private investors, who receive a share in the bank’s ownership in return. You might think, then, that if banks currently can’t or won’t raise enough capital from private investors, the government should do what a private investor would: provide capital in return for partial ownership.

But bank stocks are worth so little these days — Citigroup and Bank of America have a combined market value of only $52 billion — that the ownership wouldn’t be partial: pumping in enough taxpayer money to make the banks sound would, in effect, turn them into publicly owned enterprises.

My response to this prospect is: so? If taxpayers are footing the bill for rescuing the banks, why shouldn’t they get ownership, at least until private buyers can be found? But the Obama administration appears to be tying itself in knots to avoid this outcome.

If news reports are right, the bank rescue plan will contain two main elements: government purchases of some troubled bank assets and guarantees against losses on other assets. The guarantees would represent a big gift to bank stockholders; the purchases might not, if the price was fair — but prices would, The Financial Times reports, probably be based on “valuation models” rather than market prices, suggesting that the government would be making a big gift here, too.

And in return for what is likely to be a huge subsidy to stockholders, taxpayers will get, well, nothing.

Adding further insult, notes Krugman, is the administration’s refusal to put serious limits on executive compensation in the financial industry. As the Washington Post reported over the weekend, “The administration is likely to refrain from imposing tougher restrictions on executive compensation at most firms receiving government aid… Officials are concerned that harsh limits could discourage some firms from asking for aid.”