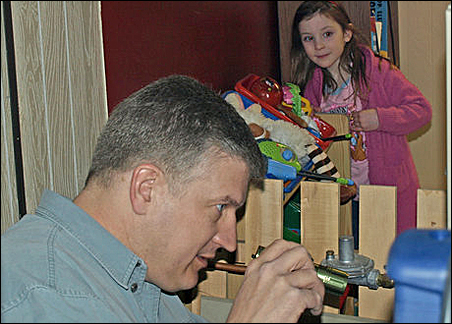 ALEXANDRIA, MINN. — Until 14 months ago, Tabatha and Chad Streich never expected that they could be leading candidates for home weatherization subsidies in a big national economic stimulus effort.

Sure their 1940s era house was drafty. On a frigid winter day you could see your breath in the second-story bedrooms. As time permitted, though, Chad added insulation, and they didn’t look for government assistance with that work.

But their lives shifted abruptly into crisis mode on Dec. 20, 2007, when their third daughter was born six weeks prematurely. Since then, little baby Jessa has suffered inexplicable bouts of seizures, skin rashes, breathing problems, dehydration and general failure to thrive.

Now Jessa weighs just a little over 12 pounds, about half the normal weight for her age. Tabatha took a leave of absence from her job to concentrate on her round-the-clock needs. Chad juggled his work hours to care for the two older girls while Tabatha and Jessa were off seeing doctors in Minneapolis and Rochester.

And the heating bills mounted — on top of medical expenses, lost wages and a crushing load of stress.

Families like the Streichs are model reasons for the government’s heating assistance programs.

Now there will be more money than ever before to also help struggling families weatherize their homes. 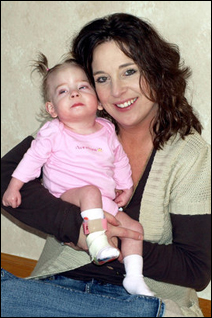 Minnesota officials expect to receive close to $135 million for that work during the next two years as part of the economic stimulus package, about 13 times the annual federal funding that had been available for weatherization in the past.

Homeowners and renters with annual incomes at or below 50 percent of the state median are eligible for the assistance. The elderly, the disabled and those living in homes with high heating costs go to the front of the priority line. More information is available here.

Even before the funding actually begins to flow, community action councils throughout the state are ramping up to process applications, said Bill Walsh, a spokesman for the Minnesota Department of Commerce which administers the program.

“If you are eligible or if you know somebody who is eligible — maybe your grandmother or someone else who could use the help — you should get down and apply,” Walsh said.

Homeowners who don’t qualify for weatherization subsidies can get up to $1,500 in tax credits for installing energy-efficient windows and other improvements by Dec. 31, 2010.  More information is available here.

Money, energy, jobs
Families can save $1.83 in energy bills for every $1 invested in weatherizing their homes, says the U.S. Dept. of Energy. It’s a savings for the taxpayer too in the cases of families who qualify for low-income heating assistance.

An overarching goal of the stimulus spending is to create jobs. To that end, the agencies that do weatherization in Minnesota already are hanging out the help wanted signs.

The Lakes & Pines Community Action Council, which serves seven counties from its offices in Mora, is adding workers to its crews and advertising for auditors to do energy evaluations, said Richard Fuchs, director of the council’s energy housing department.

Many of the other 37 community action agencies serving regions throughout Minnesota are doing the same.

The nationwide hope is to perk up jobs all the way back to the companies that make caulking, insulation, furnaces and other weatherization staples. In Minnesota, window makers will provide one measure of the job-creating success.

Andersen Windows in Bayport has bannered its Web site with information on the $1,500 energy tax credit. Construction slowdowns have hit the company hard, and it currently has more than 500 production workers on temporary layoffs, said spokeswoman Maureen McDonough.

Marvin Windows, headquartered in Warroad, has tried to avoid layoffs, but it has cut workers’ hours, said spokesman John Kirchner.

“It is too early to say at this point how many jobs are going to be created,” Kirchner said. “As soon as we have orders, we are prepared to start filling them…And if enough demand is spurred, we could see adding hours and people.”

Drafty, frosty, icy
The Streichs’ weatherization project started at the kitchen table of their three-bedroom frame home in an older neighborhood of Alexandria. Randy Hansen, an energy auditor with West Central Minnesota Communities Action, typed the house’s energy history into his notebook.

This house was typical of thousands in Minnesota: built in the 1940s, expanded in the ’50s and treated with numerous do-it-yourself projects over the years. When the outdoor temperature falls, frost coats window handles, bedrooms become refrigerators, drafts creep under the kitchen table and ice dams build on the southwestern roof.

Typically, the family kept the thermostat just above 65 degrees, Tabatha tells Hansen, but with the baby’s health problems, they turned it up to 70 degrees and still had to run electric space heaters in the bedroom where she slept.

The upshot was that the family’s natural gas bills totaled $1,479 last year and the electric bills $1,161.

Hansen looked for energy savings in every nook and corner  —  inspecting the furnace, testing the water heater, analyzing appliances and hunting down a small gas leak. He used an infrared camera to check the insulation. And he brainstormed a compromise that could add insulation in the attic but allow for storage too.

Computerized analysis will produce a list of options that can pay for themselves with energy savings over time.

Shivering behind blankets
The Streichs’ home is not by any means the worst-case example of energy inefficiency in Minnesota.

Many elderly Minnesotans live in a chilly single room for the winter months with blankets and rugs hung over windows and doors. Many rural families pile straw around their foundations and sheath their houses in transparent wrap.

And many still are cold.

State officials estimate that 400,000 households need help with weatherization. Available information on the condition of the state’s housing suggests that needs are especially intense in rural areas.

The nearly 10,000 Minnesota houses that lacked indoor plumbing at the time of the 2000 census were found in rural areas in far greater proportions than the numbers of people living there, according to the national Housing Assistance Council.  The same was true for households lacking complete kitchens and telephone service.

Of the eligible Minnesota homes that got weatherizing subsidies in the fiscal year that ended last June, 43 percent were in rural areas where about one-fourth of the people live.

Baby Jessa’s story
There is a different story behind every home in need of the weatherization assistance.

The Streichs’ story runs through Minnesota’s major medical centers where doctors have been baffled by little Jessa’s many health problems. After she was born weighing 2.5 pounds, she spent several weeks at Children’s Hospital in Minneapolis. Then she was deemed ready to go home.

“I thought we had brought home a tiny, healthy, premie baby,” Tabatha said.

Last June, though, Jessa stopped breathing and they called for an ambulance. In July, she quit eating. In August, she was wracked by seizures. Throughout, she has suffered flare-ups of skin rashes, jaundice, colds and general lethargy.

Now, her formula and water come through a feeding tube, and Tabatha gets up at least twice a night to feed her and give her breathing treatments.

Jessa has been in and out of hospitals for weeks at a time. And for the last seven months, Jessa and Tabatha have made the four-hour drive to the Mayo Clinic in Rochester at least every two weeks.

After a Jan. 29 hospital stint, Tabatha wrote this update for family and friends: “Please pray that this works for Jessa as I am not sure I can handle another long stay away from home! I am so stresses (sic) out right now! There are alot of other things going on as far as paperwork and to find a way for me to work to be able to pay bills and keep afloat.”

The Streichs are lucky in that they had medical insurance. But it doesn’t cover all of Jessa’s bills such as medication for her skin conditions and nursing care at home.

So Chad and Tabatha applied for state medical assistance, which they were grateful to get. But under the rules of the program, Tabatha said, they will lose the assistance if she returns to work more than a day a week. (She has contacted her state legislators to lobby for changing that rule.)

So they are trapped between their small daughters’ needs and the ever-mounting bills.

“That’s why we ended up asking for fuel and weatherization assistance because without me working and all of the expenses it has been really tough,” Tabatha said. “We really like the house, and we hope we don’t end up losing it.”