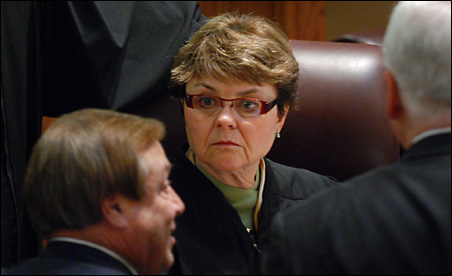 The pace began to pick up a bit today in the fourth week of the Al Franken-Norm Coleman Senate election contest.

Judge Elizabeth Hayden, who was presiding today on the three-judge panel, even showed a bit of impatience at one point.

Meanwhile, Al Franken’s side won a key ruling that will allow his lawyers to disclose how many more ballots it wants to have considered. Those would be in addition to the 3,300 or so that Coleman has been seeking to include in the final count.

In another development, Coleman’s insistence on pushing the Bush v. Gore principle of “equal protection” for all voters triggered a harsh rebuttal from Franken lawyer Marc Elias. Elias’ position was echoed by an unlikely ideological ally: The conservative Powerline blog, which has been hammering Coleman’s lawyers for weeks now, expressed skepticism in the former senator’s fundamental position that there have been equal protection violations in this election recount.

Elias, however, said, “There’s one standard, and it’s Minnesota law.”

But as this trial continues, the volume around the issue of equal treatment of ballots in different counties is going to be turned up. It was big time today.

Speedup, sort of
First of all, this morning Coleman lawyer Joe Friedberg tried a new approach when offering evidence to the court about ballots his client believes should be examined. This time, he made the offering in chunks of ballots, rather than one by one.

That is, in the direct examination of county elections officials today, rather than the drip-drip of offering Mr. Jones’, Ms. Smith’s and Dr. Brown’s  individual ballots, Friedberg’s evidence was  packaged in categories of allegedly aggrieved voters.

For instance, a bunch of alleged signature mismatches, or seemingly unregistered voters.

This was the result of in-chambers meetings Monday and this morning to streamline the case.

As both sides go through those ballots, it’s likely we’ll see a major reduction in the number of ballots Coleman will ultimately ask the three-judge panel to examine.

Friedberg, an often folksy examiner in court, actually seemed to be speaking a bit faster today, too, than in previous days. The message in chambers — which neither side discusses — must be, “Let’s get on the stick, gentlemen.”

When Friedberg didn’t have a witness late this morning to follow Wright County Auditor Robert Hiivala, Judge Hayden said, tartly, “We will with great reluctance recess until 1.”

She wasn’t happy about the lack of flow and that court was breaking about 11:25 instead of the normal noon or 12:15 p.m. time. The veteran judge, who is based in St. Cloud, has been living in a hotel in the Twin Cities the past month.

When the case started, Franken’s side sought the review of 771 additional ballots to those counted in the recount.

That was at the same time the Coleman side originally said it might want to examine 654 ballots.

That 654 grew dramatically by the time the trial started. It was eventually self-narrowed to about 4,800 and now to about 3,300 by the judges, according to both sides.

Look for Franken to add many potential ballots to be examined; hundreds likely.

“We will have the right … to put in place the ballots that we believe were wrongfully rejected,” said Elias. That new list must be presented to the court by Friday.

Countered lawyer Ginsberg, somewhat facetiously: “Now, they have gotten religion and will start adding more voters that they want to look at. I’m sure it will be a completely unbiased list, including Coleman, Franken, Barkley votes that they believe should come in. We welcome them to the club.”

Meanwhile, this afternoon, Coleman’s side was working to narrow a couple of key ballot categories it wants in the mix: signature mismatches between ballot applications and the ballot itself, and voters who were allegedly not registered but may have been.

By most analyses, voter-registration issues and signature mismatch disputes could add up to 2,000 of the 3,300 Coleman ballots still in doubt.

New round in Bush v. Gore debate
The Coleman side continues to show that different counties evaluated similar votes differently.

Carver County elections official Kendra Olson, for instance, said her county is strict on getting the addresses of witnesses of absentee ballots. But Wright County Auditor Robert J. Hiivala said his county didn’t check that at all.

Coleman lawyer Ginsberg hammers away at this point every chance he gets, noting that differing standards in County A and County B create an “equal protection” issue in this case.

“What is clear from the testimony is that not all similar ballots are treated the same,” said Ginsberg, a lawyer who helped represent George Bush’s interests during the 2000 presidential recount in Florida.

“What you see going and hear going on increasingly every day is a tale of two trials,” Elias said. “There is the one that is about who received the most legally cast ballots, which is appropriate.

“And then there is the one that the Coleman lawyers would wish to be going on, which is a broad equal protection challenge. Where we see whether or not every county and every precinct within every county did exactly the same thing … [So] if we found a felon voting illegally in Wright County, then we need to make sure that all the felons in the state got to illegally vote statewide.

“Obviously, that makes no sense . . . They clearly feel passionately about this Bush v. Gore argument … [but] thus far they have not attracted a lot of success in this argument.”

So far, it’s been turned aside by this three-judge panel and the Minnesota Supreme Court in an earlier ruling.

Wrote Scott Johnson: “I find the Coleman campaign’s equal protection complaint full of sound and fury, signifying (1) that Senator Coleman’s own legal team served him poorly during the recount, and (2) that the panel’s order on Friday cutting back the 4,800 rejected absentee ballots subject to review in the contest may have hurt more than Senator Coleman’s team has heretofore let on.”

Indeed, Friday, after the court’s decision, Coleman lawyer Fritz Knaak said, “Our definition of victory is 3,500 Minnesotans having the opportunity to have their votes counted.”

But Monday, the Coleman lawyers asked the court to reconsider the decision, suggesting as Johnson does, it wasn’t as boffo a victory as first declared.

And Ginsberg today criticized the judges’ Friday decision. At that time, the three judges wrote there was no systemic problem with the election.

Today, Ginsberg said:  “I don’t know how you can say there’s not a systemic problem when you have Scott County saying one thing and Carver County saying they do something completely different.”

Elias, however, argued that the notion of “equal protection” is a matter for the U.S. Senate and not the state court.

Countered Ginsberg, the Republican spokesman: “Does the term stacked deck come to mind?” That was a nod to the Democratic majority in the U.S. Senate.

Is Ginsberg laying the groundwork for an appeal?

No, he said, although Elias opined otherwise. Ginsberg said he wants these three judges to address the problem.

But he called the election “fatally flawed if we go along on this path” of different counties counting differently.

Countered Elias, whose client is ahead by 225 votes: “Look, if they believe that there are 226 or more individual voters who met all the criteria under state law to have their absentee ballot counted, they ought to bring them … But what they want to say is there’s a big pile of hay. ‘Look, I found a hayseed. If I found one hayseed, there must be 100 more.’ … Tell me about the individual ballots that were lawfully [cast].”

By the way, earlier today, the Franken side asked the court not to hear Coleman’s request for reconsideration of the judges’ Friday ruling that reduced the Coleman ballot universe.

Elias wrote that Coleman’s reconsideration effort was “without merit.”

And so it goes.

Senate trial developments: The pace picks up, and Franken side gets chance to expand ballot universe