If you said a newfangled piece of artwork, go to the head of the class. That’s one of the accouterments planned for Target Plaza, the pedestrian bridge and public space that will link downtown with the Twins’ Target Field and adjacent mass transit. 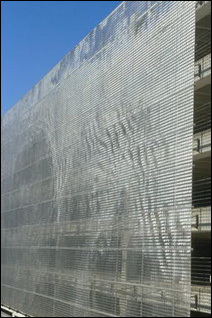 The joint venture between the Twins and Target to dress up the Plaza, announced at a press conference Wednesday, will cost between $8 million and $9 million, according to Twins Sports Inc. President Jerry Bell. The two companies will foot the bill, he said. The underpinnings and the ramp connecting the Plaza to the intersection of 1st Avenue N. and Sixth St. N. comes out of the ballpark project’s $90 million infrastructure budget.

Basically, the companies are trying to create a public park on concrete. Bell’s earnest attempt to describe the wind veil still left the art-challenged among us baffled, so let’s just show you, in this rendering from artist Ned Kahn’s Web site, at right.

The sculpture, 285 feet wide and 60 feet high, will hang on the south side of the Ramp B parking garage that parallels the Plaza.

“We’re not unaware that this borders a parking ramp,” Bell said. “God bless parking ramps. They’re a great resource. But they’re not great to look at.”

Other plans for the space include nine 40-foot tall topiary frames, lit with LED lights and twisted with annual vines. (To the beer snobs among us: Plaza designer Tom Oslund said hops will be one of those vines.) Twins execs said a light demonstration will be part of the show when a Twins player — and only a Twins player — hits a home run.

Raised lawn panels with trees, shrubs and perennials will be built on each side of the plaza. An oversized cast bronze glove, plus a tribute wall to honor fans and players, are also planned. Here’s how it will look: 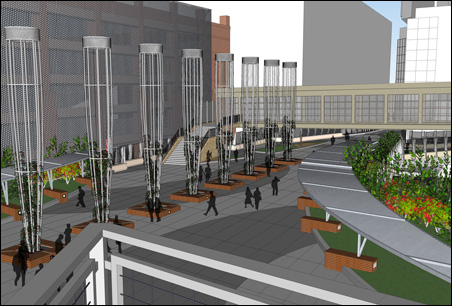 From an urban design standpoint, the plaza may be the most important public space added to downtown Minneapolis in recent years.

Gold Medal Park, another privately funded amenity designed by Oslund, grabbed much attention and critical acclaim when it opened next to the Guthrie Theater in 2006. But Target Plaza is expected to have a far higher public profile.

The Twins and Target are hoping that, in good weather, it will lure brown-baggers at lunchtime and those looking for a tranquil break in the middle of a work day. Plus, thousands of daily commuters will stream across the plaza once the adjacent transit station opens next year.

Target Plaza is important for two other reasons:

• It provides a handicapped-accessible pedestrian connection between the ballpark-transit hub and downtown businesses. The footbridge leading to the plaza runs along 6th Street on the north side of the Target Center. Without the plaza to bring foot traffic over Interstate Hwy. 394, the ballpark would have been cut off from most of downtown’s hotels, restaurants and retail stores.

• Its highly artistic design sets high standards and expectations for other blocks surrounding the new ballpark, and for downtown in general. Businesses and residents in the nearby North Loop and Warehouse districts have been pushing for nicer streets and sidewalks, both to showcase the city and to attract future development.

“I love it,” said Chuck Leer, a North Loop developer who heads the 2010 Partners, a group of neighbors and business leaders promoting quality public spaces in the ballpark vicinity. “This should be an inspiration for the other connections that need to be made around the ballpark and the transit hub,” he said.

One impetus for the emphasis on the pedestrian experience was the failure of the Metrodome to attract nearby development or quality public spaces. “The Twins and Target didn’t want to repeat the vacuous space around the Dome,” Oslund said.

Unfortunately, Bell marred the proceedings with an off-the-cuff snotty comment to reporter Randy Furst of the Star Tribune that reinforced the club’s off-putting smugness about the ballpark project.

In their initial presentations Wednesday, neither the Twins nor Target announced what the Plaza design will cost, or whether public money was being tapped. Target, remember, never revealed what it paid for the ballpark naming rights, an odd bit of secrecy for a public project of this magnitude. And last month, Target laid off 600 employees in the Twin Cities while reducing its work force by 9 percent. Furst asked how the companies could justify spending on frills at a time of economic crisis. Only then did Bell step in to estimate the design pricetag.

When Furst asked a follow-up later, Bell rebuked him for continuing to ask about costs and added, “Not every company is bankrupt,” a shot at the Star Tribune’s well-publicized financial woes. Many people cringed. Someone with a quick wit might have suggested the Twins spend less money on vines and veils and more on a third baseman, but that’s for another story.

Pat Borzi, a Minneapolis-based writer and a frequent contributor to the New York Times, writes about sports for MinnPost.com. Steve Berg reports on a variety of topics for MinnPost, including urban design, transportation, national politics and world affairs. He can be reached at sberg [at] minnpost [dot] com.