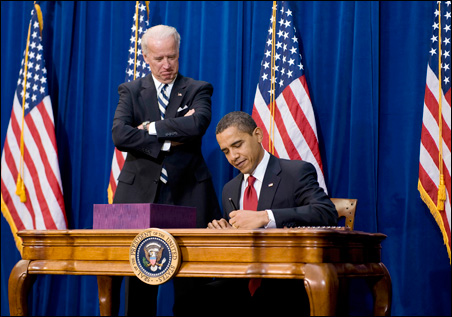 REUTERS/Larry Downing
With Vice President Joseph Biden looking on, President Obama signs the stimulus package bill at the Denver Museum of Nature and Science on Tuesday.

WASHINGTON, D.C. — Hidden in President Obama’s massive economic stimulus plan is an unprecedented — but little noticed — provision aimed at keeping Republican governors like Minnesota’s Tim Pawlenty from standing in the way of the $787 billion spending package.

The measure in the legislation, signed into law by Obama on Tuesday, could represent a significant federal intrusion into state government, according to political scholars, and has prompted worries by states’ rights advocates.

Occupying only three paragraphs in legislation that spans more than 1,000 pages, the new law clears the way for an end-run around reluctant governors by requiring governors to accept the federal stimulus funds within 45 days. If the money is not accepted within that time frame, it is passed to the state legislature for certification and release to the state.

“What is unusual about this is that Congress has created a failsafe if the governor decides not to spend the money and the legislature supports it,” said Larry Jacobs, director of the Center for the Study of Politics and Governance at the University of Minnesota.

David Quam, federal relations director of the National Governors Association, said that the provision could potentially be a “big problem.” Creating a legal mechanism to get around governors who oppose the spending “flies in the face of the state constitution and the way that money is supposed to be distributed,” he said.

“Something like this is definitely a massive encroachment into state rights,” Nivola said. “It is one thing to say you don’t get the money if you don’t certify it within 45 days, but it is quite another to sort of force the governor’s hand.”

Governors targeted
Jacobs said that he had never seen a similar situation that dealt with this amount of money and “this kind of audacity of the federal government to say, ‘We are not entirely trusting you [the governor]. If you are going to sit on this money, given the crisis we are in, then we are basically going to give you a fiscal time out.’

“It is very striking that the package looks to be targeted in very specific ways to handcuff people like Governor Pawlenty,” Jacobs added.

Although a handful of Republican governors came out in open, and even active, support of the recovery package that sailed through the House and Senate last week, not all of the nation’s 22 GOP governors have been so jubilant.

Pawlenty, along with South Carolina’s Mark Sanford, Louisiana’s Bobby Jindal, Mississippi’s Haley Barbour and Alaska’s Sarah Palin have all expressed deep concerns with the spending in the stimulus. Some have even threatened inaction.

The possibility of a block at the state level, ultimately prompted Congress to insert the 45-day provision, according to Rep. James Clyburn, D-S.C.

Clyburn publicly thanked the Congressional Black Caucus last week for the “efforts they put forth in making sure we got language in this bill that would allow communities we represent to claim the monies being funded where there may be a recalcitrant governor whose political philosophies may render him or her unable or unwilling to accept this money on behalf of our communities.”

“There was some concern that he [Pawlenty] might drag his heels,” said Clark, assistant majority leader. “We are just trying to ensure that our state maximizes our opportunities in case the governor wouldn’t act or chose to act in a limited way.”

For his part, Pawlenty has indicated that he will accept the money despite his misgivings — even banking on using some of it to help balance the budget.

“We understand that when someone else is sending you money they are going to send along some requirements,” said Brian McClung, Pawlenty’s director of communications.

Hamline University law professor David Schultz pointed to federal programs that allow cities to apply directly for federal money as an instance where the state government is bypassed altogether.

“The money goes directly to cities,” Schultz said. “So it is not unusual to bypass governors, it happens all the time. It is just the way” it’s being done that is unusual.

According to Jacobs, the bill’s language now ensures that the DFL-controlled Legislature has some significant “cards to play in negotiations with the governor.”

Veto-proof strategy
If a governor does not accept the funding then it goes to the legislature, which can pass it by concurrent resolution, a legislative measure that is usually used for non-controversial, ceremonial or commemorative items.

Concurrent resolutions must be passed by both the state Senate and House, but do not have to be acted upon by the governor and are therefore veto-proof.

While federal money that comes with “strings attached” is not altogether unique or unexpected, this measure stands apart because it seeks to go beyond simply dictating how a state should use its federal handout, according to Jacobs.

At the same time, proponents of the provision argue that the current economic situation is extraordinary enough that exceptions to the norm are required.

“The legislation is unique and the times we face are unique,” said Kristie Greco, a spokesperson for Clyburn. “No constituents should be denied federal funding, especially assistance under this package, because of a governor’s political aspirations or political ideologies…you have to put it in that context.”

As of Wednesday evening, confusion and uncertainty abounded over how the provision would be interpreted and whether any governors would turn down the money, setting the stage for the provision to take effect.

Some political experts said that the provision could potentially end up in the courts. Others said that would be highly unlikely and legal challenges to the provisions would probably fail anyway.

“I don’t think that this is going to generate lawsuits and I doubt that it would become a constitutional challenge to the authority of the state given the emergency and the crisis conditions,” said Nivola. “But the fact that they were able to tuck this into the package, seemingly without a lot of debate, suggests that the federal intervention into state and local areas that has been expanding over time is continuing to do so.”

When looking at domestic spending, the federal and state contributions have been fairly equal over the years, according to Paul E. Peterson, a professor of government at Harvard University and an expert on federalism.

With the stimulus, the federal contributions on domestic issues from education to transportation to health care now stand to go up significantly and aren’t likely to go away anytime soon, said Peterson.

“It [the 45-day provision] does show an increasing willingness of the federal government to treat the states as its agents instead of sovereign entities,” said Peterson. “It is a leading indicator of a broader phenomenon that is at work here.”

Then again, Peterson added, the states have not done a very good job in positioning themselves to ward off such intrusions.

In a way, “the states have invited this,” said Peterson. “They haven’t kept their fiscal houses in order… they are the General Motors of the American government.”