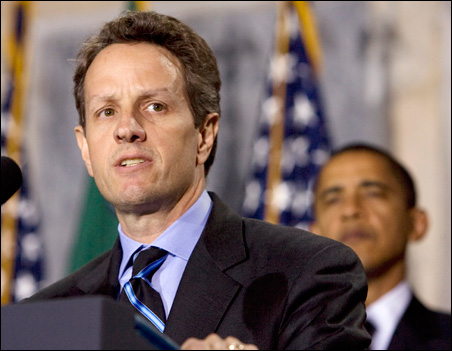 REUTERS/Larry Downing
President Obama listens to Timothy Geithner after he is sworn in as U.S. Treasury Secretary.

The morning’s must-read is Stephen Labaton and Edmund Andrews’ NYT preview of Bailout II: The Empire Strikes Again. Over the objections of some White House staffers, Treasury Secretary Tim Geithner will take the podium today to deliver a plan that would make his Hank Paulson proud:

The $500,000 pay cap for executives at companies receiving assistance, for instance, applies only to very senior executives. Some officials argued for caps that applied to every employee at institutions that received taxpayer money.

Abandoning any pretense about limiting the moral hazards at companies that made foolhardy investments, the plan also will not require shareholders of companies receiving significant assistance to lose most or all of their investment. Some officials had suggested that the next bailout phase not protect existing shareholders….

Nor will the government announce any plans to replace the management of virtually any of the troubled institutions, despite arguments by some to oust current management at the most troubled banks.

Finally, while the administration will urge banks to increase their lending, and possibly provide some incentives, it will not dictate to the banks how they should spend the billions of dollars in new government money.

And for all of its boldness, the plan largely repeats the Bush administration’s approach of deferring to many of the same companies and executives who had peddled risky loans and investments at the heart of the crisis and failed to foresee many of the problems plaguing the markets.

It could hardly be a sweeter deal for banks and investors. And don’t take too seriously the pledges by Larry Summers and others of greater “transparency and accountability.” Yes, the government has published some TARP I contracts. It’s going to set up a website to track bailout funds. But it won’t be too hard to game the system, especially when the builders of that system fundamentally agree with bankers that transparency is bad for business. As David Barstow and Mike McIntire write in another Times piece today, “the populist impulse to follow the money is not always shared by banking regulators who are primarily concerned with preserving the overall stability and liquidity of the financial system. For them, there is such a thing as too much transparency — especially if it undermines public faith in banks or discourages ailing firms from seeking help.”

The story also elaborates on those TARP I contracts that the government has released: “Despite running hundreds of pages in length, the government’s current contracts with TARP recipients contain only two vaguely worded sentences describing what the banks pledge to do for the public in return for tax dollars: They must try to ‘expand the flow of credit to U.S. consumers and businesses’ and they must ‘work diligently’ to help homeowners avoid foreclosures. The documents contain no other requirements for disclosure or use of the federal money.”

Here’s guessing that Team Obama’s strictures won’t be much tougher. If they were willing to impose genuinely rigorous conditions, then the subject of taking over the banks wouldn’t be entirely off the table, as it has been from the start.

Given the choice between the course taken by Sweden in the 1990s (a temporary nationalization of the banks that succeeded) and the fatal drift of Japan from the late ’80s onward, the U.S. government is choosing the latter. This brings us back to Kevin Phillips’ admonition that declining world empires never avail themselves of the opportunity to reduce their bloated financial sectors: By the time crises have become manifest, the Wall Streets of history have simply possessed too much political power.

Turning Japanese: Geithner flouts his critics, and the lessons of history